The Republicans’ campaign strategy puzzles me. I keep seeing meme after Russian-influenced meme belittling Joe Biden for things for which Trump is famously and obviously known.

For example, they lay into him for verbal missteps. Excuse me? Have they ever heard the word salad coming from their leader? The guy is basically incoherent. A 2nd-grader telling a story has a more organized narrative than their guy. And probably a broader vocabulary.

Sure, compared to Obama, Biden is nowhere near as elegant. But the guy is battling a stutter and most of the time sounds just fine. Public speaking is hard. Not everyone can do it well. I’d like to see how well some of these criticizing buffoons could do, speaking to an arena or TV audience without tangling their tongues once in a while. Most would end up like this:

So it seems weird to me that they’d even bring up the subject of mangled language while trying to support President Tourette. It’s something I’d take off the board rather than dare people to compare.

Same with some other memes I’ve seen calling Joe out for lying.

Seriously? Their guy created a whole cottage industry out of fact-checking and they want to talk about anyone else lying? I know Republicans love to accuse others of doing exactly what they’re doing themselves, but this is ridiculous. You’d think they’d want to bury that topic in a hole deeper than the one our economy is in.

Which brings us to the Tara Reade situation, the woman whose ever-changing story finally landed on Joe, in places unknown, at an unknown time, grabbing her by the pussy.

This one, I almost understand. Sure, Trump has over 20 women accusing him of various sexual misconduct, including rape, several of whom are pressing legal charges. Hell, he even bragged about some of it on tape.

I think Republicans consider this controversy a win/win.

If it happened, they’ve got some mud for their opponent, because it seems that Democrats take this kind of thing more seriously than Republicans, meaning we’re more likely to eat their own than the Republicans are. Look what happened to Anthony Weiner and Al Franken. But to Republicans, just being Republican is like a blanket immunity. They’ll put up with whatever their chosen ones do in their personal life as long as the tax cuts and conservative judges keep coming. They hope that if they tarnish Joe enough, Dem voters may lose enthusiasm and stay home on Election Day.

On the other hand, if it proves not to be true, they’ve put a dent in #MeToo and #BelieveWomen. Then grabby, powerful men can start to breathe a little easier when they once again can resort to “Who are you gonna believe, me or the lying slut?”

My take on the issue? I don’t think it happened. I was swayed by an article I read in USA Today, written by an ex-prosecutor. He points out a number of issues that would have kept him from pursuing her case in court, like delaying reporting, changing her story for shaky reasons, missing paperwork, and much more.

Before I even saw the article, I was wondering, “Why now? Why not when he was running for VP? Was that not a high enough office to keep a predator from obtaining?”

I’m also suspicious of her not being able to identify a date, time, or place. I mean, how could someone not know where something like that happened to her?

The lack of particulars prevents Joe from establishing an alibi, which I think is exactly the point. They want this to be the drip… drip… drip kind of scandal they kept alive with Hillary. Doesn’t matter if it’s true or not, just keep it in the news.

I’m puzzled why they’re not using the Biden plagiarism issue that derailed his campaign in 1988. Maybe they’re saving that one for later. Or not… it’s the very definition of old news.

And now, onto another episode of Debunkery. I saw this posted by a conservative friend on FaceBook over the weekend: 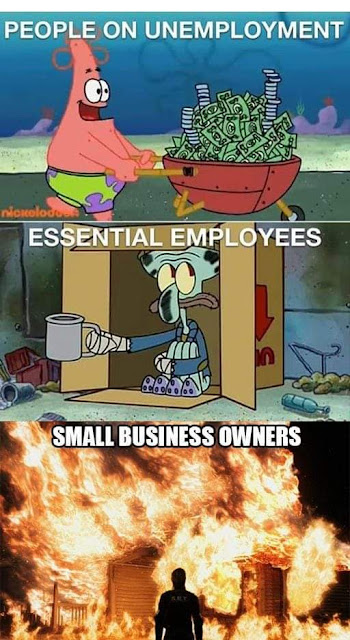 Republicans are at fault for every situation you see here.

Unemployed: They’re at fault mostly because they’re just wrong. Unemployment has been extremely difficult to obtain over the last couple of months and in red states, it’s been damned near impossible (which was by design). And the forced openings are designed to make people choose between their health and going to work. Because once the business is open, if you choose not to come to work, you’re ineligible for unemployment.

Essential Employees: Maybe if Republicans would permit a living minimum wage, retail workers wouldn’t be in such dire straits. Or if they would pass the new pandemic relief bill, which contains Hero Pay. (Money for those doing dangerous but essential jobs.) But Mitch has already put the kibosh on that because he’s against any money going to the general public that hasn’t been skimmed by a giant corporation first. And they’re definitely against any more direct payments to every citizen, like that $1200. In his world, if you can’t stretch that money for the rest of the year, you must not be able to manage your money. Spendthrift!

Small Businesses: Republicans are 100% to blame for this for insisting that the Small Business Relief Fund be administered by the big banks and wrote the rules so that just about any business can get their hands on the dough. And this sum was aside from the fund they created especially for big businesses, to be doled out in secret, for use any way they want.

If you’re going to vote/support/condone sending billions of government dollars to the richest in the country, you don’t get to cry about economic inequality.

As someone once said, the Republican creed is "comfort the comfortable, and afflict the afflicted." The other kick in the ass is that, when you put them in charge of government, they have a philosophical aversion to making it work for anyone except the donor class. So, for example, in Florida, they're having horrendous problems with the unemployment benefits system because the previous Republican governor now Senator, Rick "Dick" Scott decimated it. Because, of course, people who are unemployed are just moochers taking advantage of the system, unlike, say the CEO of a health care company who was responsible for the largest Medicare fraud case in U.S. history -- right, Rick Scott?

Repblicans' only problem with Rick Scott is that he got caught, exposing the whole scam. Of course, it's not THAT big of a problem. The rules/laws only apply to Democrats.

Both sides.
The Democrats’ campaign strategy puzzles me. I keep seeing meme after Liberal-influenced meme belittling Trump for things for which Joe Biden is famously and obviously known.

For example, they lay into him for verbal missteps. Excuse me? Have they ever heard the word salad coming from Joe Biden? The guy is basically incoherent. A 2nd-grader telling a story has a more organized narrative than their guy. And probably a broader vocabulary.

Sure, compared to Obama, Trump is nowhere near as elegant. But the guy is battling inexperience and most of the time sounds just fine. Public speaking is hard. Not everyone can do it well. I’d like to see how well some of these criticizing buffoons could do, speaking to an arena or TV audience without tangling their tongues once in a while.

"Doesn’t matter if it’s true or not, just keep it in the news."

That's the trick. That is the whole playbook there. False equivalence, half-truths, and outright lies.

Nice try but that doesn’t really work, given the disparity in the participants’ missteps. Biden scrambles a word now and then but generally makes sense. Trump has a primitive vocabulary and zero sense of narrative, other than Dick and Jane-type structures. Then mix into it that the bulk of what he says is just untrue.

They can't tell the truth when the truth is a nothing-burger.

Not only that but health professionals say Trump's incoherent and jumbled speech is a clear indication of approaching dementia.

And you know that's hitting close to the mark because they're starting to accuse Biden of having dementia as well.

Donald Trump, 5/20/20: "And, you know, when you say “per capita,” there’s many per capitas. It’s, like, per capita relative to what? But you can look at just about any category, and we’re really at the top, meaning positive on a per capita basis, too. They’ve done a great job."

Clearly, he has no idea what he's talking about.

You already know how I feel about the #MeToo Movement and anything related to abuse, so initially when I heard about Tara Reed, I was thinking this is not good. My friends will tell you that always side with the accuser, but that's not actually the case. I read all I can and listen, then I watch the accuser very closely for tells that I learned about years ago from a police officer and a detective. The reaching under the dress or skirt for some sexual grabbing action I don't believe ever happened, but I do believe he may have rubbed her shoulders, which has happened to me plenty of times way back in the day, and I just used to tell the culprits I don't like massages and would get up or move to a different area. So why didn't she bring it up when he was running for Vice President? Everyone wants to know. Air Hugs to you guys, RO

I think #BelieveWomen essentially means #TakeWomensChargesSeriously, meaning, do an honest investigation. There are too many politically motivated (or otherwise) liars around to just take anyone's word for anything, any time. Ms. Reade's story has more holes than a screen door.

Here is even more evidence that Tara Reade is a liar and a grifter and a serial accuser. This doesn't even include her perjury when she lied about her credentials in several court cases. http://ascammersnightmareisjustice.blogspot.com/2020/04/tara-reade-legacy-of-lies-part-one.html

That is one seriously effed up story. It's amazing she wasn't in jail long before she made the Biden accusations.

Definitely agree with you there, and some great points! Air Hugs, RO