One thing about this coronavirus pandemic… it shows you who is on the ball and who is not. Some businesses had plans for operation during a pandemic. Others seem to be making things up as they go along.

I don’t know what’s been going on with our local school systems but I’ve been watching what they’re putting my wife through since the middle of March, but it hasn’t been pretty. Sweetpea is an elementary school teacher and like so many others, has had to adapt to a virtual reality for work purposes.

The first week they closed schools, it was a total clown show. No one knew what to do and it took until the next week or two for some kind of plan to evolve. And naturally, very little of the tech worked as advertised, leaving many of the teachers, who were not tech-savvy, floundering. Even when instructions were followed to the letter, shit just didn’t work. And no one else, not even the people rolling out the programs, could provide competent guidance.

I could go on and on about the technical challenges and how hard Sweetpea worked to make things function. Suffice to say, there was yelling, crying and wine involved.

I’m telling you, they finally worked out the kinks enough to begin actual teaching this week. The previous month or two has been devoted to virtual meetings (to keep morale up amongst the children) and discussing work packets that have either been picked up from school drop-off points or downloaded online.

I was stunned that a major school system didn’t have pandemic Continuity of Business plan. Hell, that should have been done at the state level. I know other businesses had pandemic plans. And I know this because I worked on one.

From 2006 to 2011, (and off and on for another 4 years) I worked in my company’s COB (Continuity of Business) department. (COB is basically emergency planning, like “How do we keep our business running when there’s a major hurricane in our market, or the city loses power, or a water main break shuts down the home office? What has to be done now, what can we hold until later? How much later will it be before things we’ve put off get serious?”)

We had COB plans for our branches and for our centralized locations. We wrote the plans and tested them thoroughly, both in theory and in practice.

For example, if our office building were to become incapacitated for any reason, we had another site from which we could operate. There was a plan to decide who goes and computers, printers and other supplies there for the emergency team to use, to keep the business running. Every year we’d go out and physically test all the equipment, to make sure it would be operational in a crunch. (Eventually, that option gave way to the virtual desktops that are so prevalent today.)

We also did “tabletop” tests, wherein an emergency scenario would be presented and the department heads and key players would gather to discuss what they’d do to react to address the crisis. Step by step, the group would talk through the situation as it evolved in phases and describe what they’d do to keep the business going.

It fell to me to create and develop the tabletop tests and scenarios and I came up with ten of them, and each department could have a different one year after year. Granted, the last couple were written with a great deal of whimsy. I guarantee that the approvers in my department only read the first couple before blessing the whole stack. Otherwise, The Great Circus Train Incident would never have come to pass.

When the H1N1 virus first came out in 2009, we began to develop a pandemic plan, should something like that reappear with greater intensity. We bought and stored medical masks and sterile wipes, to keep for when necessary and had plans for distribution, should the time come.

In 2010, our whole corporate operation (my company was one department of one of the “Big Banks”) conducted a pandemic tabletop test which played out in phases, asking what we would do if we lost 25%, 35%, 50% or more of our employees due to illness. It was uncomfortable but it made us think about how to persevere in the face of catastrophic circumstances.

So when I look at the other businesses operating now, including the school systems, I don’t have any sympathy for not being prepared. H1N1 gave us a good wake-up call. It was up to us not to press the “snooze” button. And it looks to me like the schools were caught sleeping in class.

The warnings have been out there… SARS, H1N1, Ebola, all of them could have gotten worse. Finally, the coronavirus did, and it was as if we’d never considered such a thing before.

The schools, in particular, should have known that they’d be “ground zero” for virus containment. How could they not have a plan to continue students’ education? Something like this happening was inevitable.

I’ll give you that schools around here have a lot on their plates just to provide the bare minimum. There are giant problems they have to face on a daily basis. BUT, that’s no excuse for the Superintendents across the state to show up with their pants down when it was time to shelter in place. As far as I’m concerned, that’s a dereliction of duty.

Coronavirus didn’t just come out of nowhere… it’s been on the horizon for years. All we had to do was pay attention. Smart organizations did and now they’ve shifted seamlessly into this new reality, because it was anticipated and addressed. Those who didn’t have had a rough couple of months.

Although there’s a benefit: now parents have a clearer idea of what teachers have to go through day in and day out.

Side note: It just dawned on me… how long do you think it will be before Trump takes credit for the drop off in school shootings this year? You know it’s gonna happen…

And speaking of the Clown-in-Chief, remember how at the end of last week’s post I talked about getting the Trump letter about our direct deposits and how the taxpayers shouldn’t have had to pay for something that’s basically a Trump re-election campaign ad? It turns out the letter it might not have been such a useless gesture after all.  I found the perfect use for it: 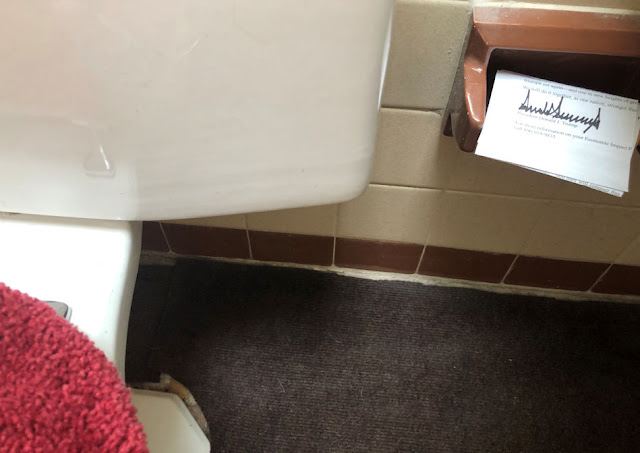 Preparedness and safety are often casualties of budget issues. They cut funds and time spent on things that don't turn an immediate profit or show an instant effect, then they get bit on the ass when something inevitably goes wrong.

A prime example is Trump cutting the federal Pandemic Planning Team last year, because he couldn't see results of anything they were doing.

Sadly 'planning for things that may happen' costs money, and at least in red states like mine, thaat's considered money "stolen from it's rightful owner"...after all what profit does a school ever turn, hennngh? I've worked with folks who were IT for major school districts...in good times it's all held together with spit, duct tape and wishes.

I think they could have at least had a couple school board members brainstorm a pandemic situation and talk through what to do. When the governor closed schools in March, I don't think they had the slightest idea what to do next.

That said, I agree with you; whenever times get tough, peripheral things like safety and planning go by the wayside. My father used to work as safety director for various glass and corrugated plants, and whenever there was a downturn, worker safety programs always took the first hit. After all, workers are replaceable, but a bad third quarter report is forever.