It's Definitely Not About the Virus

The disinformation war rages on. A conservative friend posted this on Facebook last week, which brought out my debunking instincts immediately.

You know, every time someone reposts a meme like this, some Russian in a troll farm gets his wings. 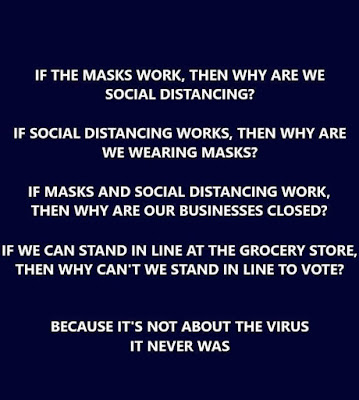 We can debunk this one line by line.

If the masks work, then why are we social distancing? Masks, other than the N-95 masks, which few non-medical professionals have, are only good for reducing the amount of contaminated droplets expelled by the wearer. It is not Saran Wrap. Stuff gets through, but it’s not as much as if you were unmasked. If you remain in one place, in close proximity with someone who is contaminated, mask or not, you can still pick up the virus. That’s why social distancing is also required.

If social distancing works, then why are we wearing masks? See the above answer. Masks don’t contain 100%, but they’re much better than nothing. If you have a choice between spreading 100% of the virus or less than 100%, the obvious choice is to wear a mask, if you care whatsoever about those around you. (And by looking around, you can tell who doesn’t.) If you’re in one place long enough, like in a store or office, social distancing does not prevent transmission. If you go back to the link I posted 2 weeks ago, it says that transmission goes up over time, meaning the virus can travel if you hang around long enough.

Both of the two questions above use the assumption that masks and social distancing are foolproof as stand-alone actions. They’re not and no one says they are. But when used together, knock down the transmission rate.

If masks and social distancing work, then why are our businesses closed? Because not being in proximity to the virus or those carrying it IS 100% effective in reducing transmission. Some places need to be open, like grocery stores (people gotta eat) and liquor stores (people gotta relax after trying to home-school their kids,) but most others don’t. They’re conveniences and nothing more. It’s unfortunate, but we’re dealing with biology here, which doesn’t care about economic influences.

Also, if you’re been out, have you seen the compliance level in the reopened stores (or anywhere else)? It’s spotty at best. Too many people either don’t care, or believe bullshit memes like this one. This is the end result of decades of sowing mistrust of science; people happily embracing that which can kill them and their families. 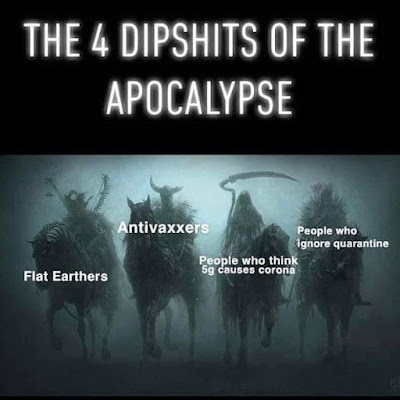 Have you seen the stories coming out of places that are opening prematurely? Like in Missouri where two hairstylists spread the virus to 140 people. Or two counties in Georgia where church gatherings blew up into COVID-19 hot spots?  New hot spots are popping up solely because non-essential businesses (and I can’t think of any “business” more non-essential than churches), are opening back up based on economic and political concerns rather than epidemiology.

If we can stand in line at the grocery store then why can’t we stand in line to vote? And there it is, the crux of this whole meme. It all comes down to preventing people from voting by mail.

Before I go too far abroad, let me answer the last question. Groceries are essentials. Yes, so is voting, but you can continue to live without voting. Groceries, not so much. Yes, it’s possible to have groceries delivered, but many can’t afford that if it’s even available in their area. And it’s only really good for packaged goods, like cans or boxes of stuff. Not many would trust others to pick out their meat, fish, or produce. I wouldn’t.

So, standing in line at the grocery store is a necessity. Masks and distancing mitigate the danger but it’s still there. People have to obey the safety guidelines, but many don’t.

With voting, there ARE alternatives, making it unnecessary to rely on in-person voting, like mail or online voting. With care, both can be made secure, but only if those in charge want it that way. Republicans have a vested interest in maintaining the status quo because it’s the only way they win, anywhere but the Red State strongholds.

THAT’S why people publish memes like this, with tank-sized holes in the logic and fact chain. It’s to make people suspicious of voting by mail, because if voting were easier, as Donald Trump himself said, “If we gave Dems what they wanted for elections (mail-in voting) in that last bill, a Republican would never win again.”

And that’s not because of some kind of national network of voter fraud, it’s because voting by mail defeats the attempts by red states to suppress the vote of carefully selected citizens. This is the Republicans laying the groundwork to contest the results of the 2020 election.

What they’re trying to do, by deriding voting by mail, is to attack mail-in voting alone, shorn of any context. Context, like their ongoing campaign against (the illusion of) voter fraud.

A sterling article in the NY Times last week called out the Republicans' massive, years-long campaign of voter suppression. The latest ploy is to send teams of operatives to polling centers to contest whatever they feel are fraudulent votes. (Ask yourself how, exactly, they’re going to determine, by sight, whose votes to challenge?)

From the article: “The efforts are bolstered by a 2018 federal court ruling that for the first time in nearly four decades allows the national Republican Party to mount campaigns against purported voter fraud without court approval. The court ban on Republican Party voter-fraud operations was imposed in 1982, and then modified in 1986 and again in 1990, each time after courts found instances of Republicans intimidating or working to exclude minority voters in the name of preventing fraud. The party was found to have violated it yet again in 2004.” (Emphasis is mine.)

The Republicans have no real choice. There are just not enough people who think that sending all the tax money to the richest people and corporations and cutting government services to the common citizenry is a good idea… Government services like OSHA, the EPA, The FDA, the CFPB, and other departments that apply rules that eat into the profits of big business owners.

So they run on fear, trying to make you scared of illegal aliens, Chinese, foreigners from anywhere but Scandinavia, gays, trans people, atheists… they hold them up to blame for everything that’s wrong in your life. They wrap themselves in the flag and call themselves the “Pro-Life” party, but you can see how seriously they treat citizens’ lives. “Protecting” the unborn doesn’t cost them anything. Protecting the rest of us isn’t good for third-quarter profits, so they want us open for business again. 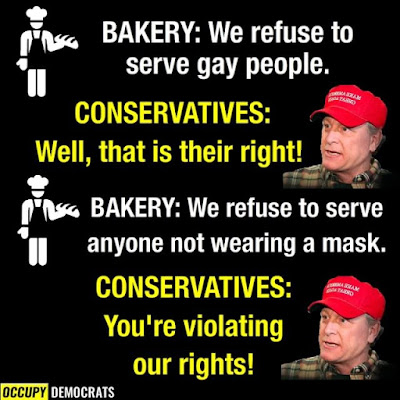 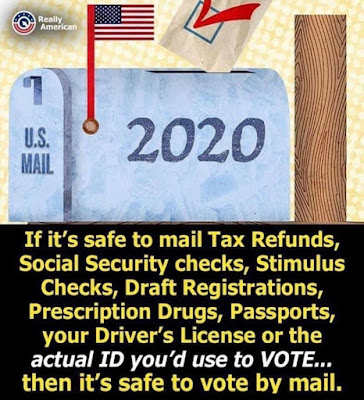 Our county in Northern Minnesota has been voting by mail for nearly 20 years. You need a witness and your ballot is inside two sealed envelopes when sent in. There has never been any fraud and the process and the counting is open and transparent. It works just fine and is quite convenient.

In the words of RuPaul, "I'm an introvert masquerading as an extrovert". So I've been comfortable heading out to the supermarket and the post office in a mask, and standing on the 6 ft marks as required. But sometimes I just drive around or for exercise. I knew all hell was going to break loose this weekend, and sure enough Missouri made it to the news again for that crowded pool party, along with Myrtle Beach and others. One kid said if he had it, everyone else would get it too, and oh well. One thing this has reminded me of, is that people are going to do what they want, no matter what. Sadly, selfishness is alive and well. You guys stay safe and sending more air hugs, RO

There's no question that voter fraud is "possible" with mail-in ballots, just like with any procedure. I'm hopeful that states who are trying it out over the spring and summer can get their shit together and work out the details. Maybe take some tips from states like Minnesota, who are already doing it.

That kid sounds like the offspring of the "Me First" Generation. If I ever said something that selfish when I was young, I'd get a crack from my Mom with her wooden spoon.

If our country ever finds itself in a position like we were in WWII, where sacrifice is demanded from everyone, we're going down in flames. this is a culture that can't even sit on the couch for a while without whining about their loss of "freedom."

If masks and social distancing work, then why are our businesses closed?

This is like saying, "If car brakes work, why do we need seat belts?" The flaw is in thinking only in terms of "it works" vs "it doesn't work" and being unable to grasp the concept that all these precautions reduce risk but don't eliminate it, so it's safest to use them in combination. It's thinking in absolutes.

Five states, including mine, have been voting entirely by mail for years and there haven't been any problems. It does result in very high turnout. For Republicans, as you say, that's a problem.

Obi-Wan had it cold, way back when, when he said, "Only a Sith deals in absolutes."

Although Yoda should add, "Unless only a choice between two viable candidates, there is."