The Russian troll farms were hard at work last week, where I came across some of these visual road apples that represent the fruits of their labor. 1)      Who the hell ever said Harris can’t be criticized? No one. But I agree that it would be good to hear criticism based on something relevant, like a policy she issued or stance she took.
2)      Palin was criticized for being an empty vessel, which she was. For Pete’s sake, she didn’t know that there were two Koreas or that there were three branches of government. She campaigned on three things, being cute, dog-whistling the racists, and pitching dirt at Obama. 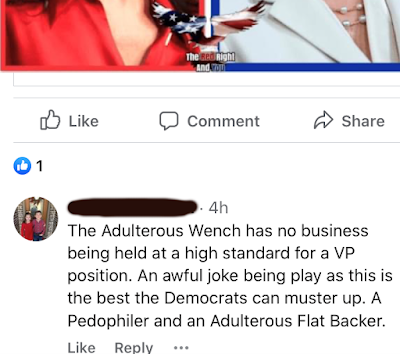 Now, look at the very first comment, which shows you how righteous the Radical Right is:


1)      Adulterous? You’re actually going there? Ms. Harris may have had a relationship with a guy early in her career, a guy who had been estranged from his wife for over 10 years. She was single. What’s the BFD?

2)      “Pedophiler (sic) and Adulterous Flat Backer?” Where is the evidence or even legitimate accusation that Biden is a pedophile(r)? This is just QAnon conspiracy theory bullshit. (You know, that baseless accusation that the Democrats are running a child abduction, molestation and cannibalism ring and so on. It’s all sizzle and no substance. There’s not a wisp of evidence of any such thing. Just ask the cops who arrested the armed asshole that charged into that pizza joint, looking for a pedophile ring in the basement of a place that didn’t even have a basement.)

You want to talk about someone who runs in pedophile rings? 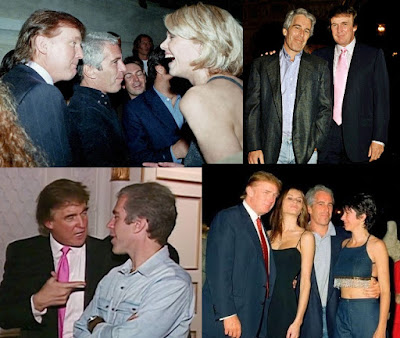 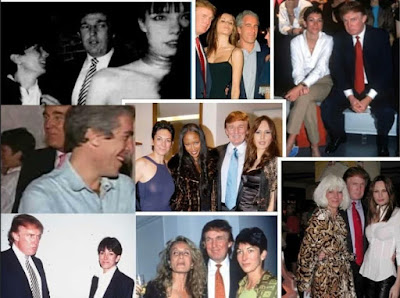 Trump hanging with the woman who obtained the children for Epstein.

3)      THIS is the kind of comment that rational people think has no place in political discourse. It has everything, poor grammar, wild and unfounded accusations, and a wild double-standard that rakes the side that didn’t do what’s mentioned on behalf of the other side that did. 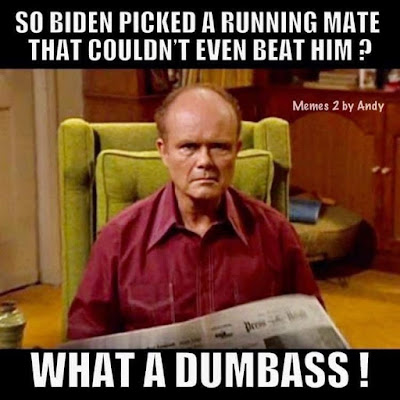 I agree, only a dumbass would post something so utterly stupid.

1)      Pence ran against Trump in the 2016 Republican primaries. So Trump also appointed a guy as VP who “couldn’t even beat him.”
2)      And you know what else? So did every other candidate across time and space; the nominee won the primaries because nobody beat him. Either they couldn’t beat him because they lost in the primaries or couldn’t beat him because they didn’t run. Jesus Tap-dancing Christ, this is a stupid meme.
3)      This is another example of “It’s Not Wrong if Republicans Do It.” Or “It’s Only Wrong if Democrats Do It.” Pool or pond. 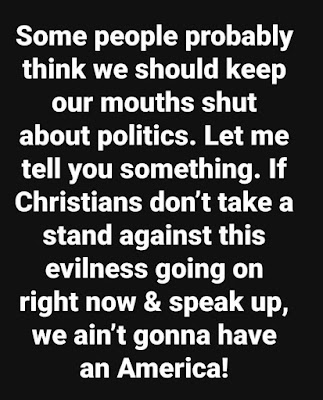 So if you’re not Christian, you’re evil. Got it. Also, fuck you.

You know, I wouldn’t mind if the “Christians” in the public forum demonstrated their Christianity by actually emulating Christ. They could feed the hungry, give money and shelter to the poor, welcome strangers, and commit their lives to help others. But that’s not the Republican’s policy now, is it?

When you can show me the Bible passage about how we have a right to military-grade firepower and armor-piercing rounds, then you can talk to me about evil. Show me where Jesus said, “I got mine, get yours.” Don’t even practice what you preach… go practice what Jesus (allegedly) preached. If you can’t do that, you’re just another hypocrite.

2nd Eye Update
Just to update you on the rest of the cataract surgery I told you about two weeks ago… I had the other eye done Thursday 8/20 and it went much more smoothly. The secret was to keep that left eye open while they're doing the laser prep on the right. That keeps you grounded in reality and helps avoid being sucked into a darkened, swirly-light abyss. So no Big Red Spot of Jupiter this time.

As I write now, I have very good vision in both eyes, although they do burn a couple of times a day. But even if it never gets any better than this, it's a huge improvement. Totally worth it.

These people really need to work on their basic English. "Adulterous flat backer"? Is that somebody who has extramarital sex and is in favor of flat tires? (Yes, I did eventually figure out what it meant.) Also, somebody needs to tell them that capitalizing words that aren't supposed to be capitalized makes writing look pretentious and uneducated.

It is always amusing when fundies single out our own time in American history as exceptionally evil. The worst evils in this country's history were slavery and the Indian genocide. Compared to those, any evils happening today are trivial.

Glad to hear the cataract surgery went well. I know it can create a huge improvement in vision.

My first thought was, "Doesn't everyone have a flat back? Except maybe Igor?" And I think they take their capitalization habits from the Tweeter in Chief. Or vice versa.

It's dangerous when we get into the territory that "everyone who doesn't agree with me is evil." Especially when done while exhibiting zero kindness, compassion or empathy.

My father had cataract surgery but I was young and didn't understand everything involved. I saw a guy on television have surgery to have his vision corrected and it took all of 25 minutes, and the next day his vision was near perfect. Then I had a friend who had cataract surgery about a year ago, and she ended up staying in the hospital for 2 days. By the time she got out, her vision had greatly improved too. I'm glad that you're doing much better. Bloggers need to be able to see what in the heck is going on. Hugs and happy weekend to you and Sweetpea. RO

I had all kinds of preconceptions of what laser eye surgery would be like and all of them were terrifying, but fortunately they were way off base as well. As with the guy on TV, this took about 25 minutes of non-waiting around time. Then I went home for a fabulous nap.

Yes, the eyes do have it. I realized that just about everything I do, everything I enjoy, has a visual factor. Losing that would be devastating.