The whole thing is exhausting, it really is. It just keeps happening again and again.

No matter how much protest, no matter how many op-eds are written or condemnations received, police continue to shoot or otherwise kill unarmed Black men. Used to be they only had to claim they “feared for their lives” in order to justify a shooting.

Now they’re shooting guys in the back at point-blank range in broad daylight, in front of multiple witnesses and video cameras. A guy, who wasn’t a suspect or involved with the police call in any way but as a bystander and/or commenter, turns away from police and casually walks back to his car, containing his children. Where’s the fuckin’ threat? Besides the notion that “he’s a Black guy, therefore he must have a weapon that he’s about to use.”

And he doesn’t just get shot once… the cop shoots, again, IN THE BACK, seven times! Did he think this guy was the Terminator or something?

And then, in the inevitable wake of protesting this cowardly shooting, some white kid comes in from 30 miles away with a semi-automatic rifle strapped on shoots a guy and has a casual stroll past the cops.

So, the Black guy gets shot because he “might” have a weapon in his car, the white guy gets to stroll down the street wearing an AR-15. And people wonder why there are protests. It boggles the mind.

And it especially boggles me about the lengths people are going to defend the white kid and condemn the Black guy. “Hey, they found a knife in the car!”

Big freakin' deal! I have a knife in my car, does that mean that every time I get pulled over, the cops have the right to shoot me in the back too? Jacob Blake was not about to go pull a knife out of his glove box to take on a cop armed with a gun. He wasn’t drunk or high, just a father on duty. The fact that this guy was so scary that he “earned” 7 shots in the back tells you all you need to know about the Kenosha PD.

And the kid, he’s a hero now to the Right, because he took it upon himself to go to a town in which he doesn’t live, and point his gun at people who are exercising their constitutional right to assemble. And that tells you all you need to know about The Right… applauding the white guy for shooting some protesters.

Yes, these “great patriots,” who claim to revere the Constitution, are just fine with vigilante justice and civilian executions.*

*As long as none of “their” people are the ones getting killed.

Here’s a news flash: Talking back to a cop is not a death penalty offense. Neither is disobeying or disagreeing with one. Nor are traffic citations, counterfeit money-passing, unlicensed vending, carrying a knife, looting a store, or throwing a rock. I’m not saying they may not be crimes or violations, but there is a standard for punishment set up in this country and neither cops nor random incel kids looking to feel better about themselves get to decide otherwise.

I’ve said it before and I’ll say it again: if any of these “good, white, Christian, conservatives” ever had to live for a week as a Black person does every day, they’d be burning shit down by Thursday. Hell, all a Black family has to do is barbeque in the wrong place or sell lemonade on the sidewalk, and some white woman is calling 911. What happens when they come face to face with actual persecution?

I don’t see how this problem with the police ever gets solved. I know that there are good cops out there but their noble actions are getting over-shadowed. At the moment, the police unions, backed by the conservative, law-and-order, man-in-uniform fetishists, think they’re totally in the right in that every confrontation an “Us or Them” situation that warrants lethal force.

They are not going to go along with any reforms until that mindset changes. And for such a change to take hold, they’ll have to get rid of the die-hard racists, white-supremacists, and sadists who revel in kicking ass.

Or, the penalties for unwarranted violence upon detainees become life-changing enough that they become a disincentive to shoot first and ask questions later.

Good luck waiting for either of those things to happen.

Until then, Wisconsin might as well follow in Georgia’s footsteps, (as reported years ago in The Onion) and update their flag: 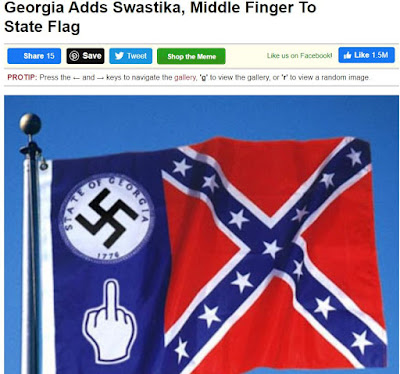