I never thought I’d live to see the day where an American election was being sabotaged, right out in the open, by those running the country. This is the stuff of third world banana republics, not the US of A. But here we are.

The current occupant and his accomplices in the Senate have decided to cripple the US Postal service, in order to throw a wrench into any plans to conduct the 2020 election by mail. They claim mailing ballots leads to rampant mail fraud, which is a charge completely without evidence. At least 5 states have been using mail-in ballots for years without incident. Many more states have been aggressive in their use of absentee ballots on request.

Republicans fear that if voting is too easy, meaning that poor people don’t have to take time off work to do it, and people would otherwise have to risk COVID infection while waiting in lines, it might favor Democrats. So Trump began laying the foundation months ago with repeated claims that mail-in voting = election fraud favoring Democrats.

Again, there isn’t a grain of evidence to back this up. There IS evidence that Republicans in North Carolina executed a plan to ask Democratic residents for their mail-in ballots so they could take them to the election HQ for them, and then shit-canned the whole pile. The evidence was so overwhelming they had to redo the election in that district.

So now that their base is all riled up about mail-in ballots, he appointed a big-money donor with interests in a company that competes with the postal service to “run” the operation. And by “run,” I mean dismantle. At least temporarily.

Republicans have been trying to get rid of the postal service for ages. Be aware that when they bring up how in debt the USPS is, it’s because the Republican Congress under the Bush Administration passed a rule that the Post Office had to fully fund, in advance, their entire pension fund, an exercise that no other organization is required to do. They literally created the debt they are now using as a lever to weaken the postal service. They’d like nothing better than to come through for their big donors who represent UPS, Fed Ex, DHL, or the other national delivery organizations.

So now, as the presidential election hits prime time, the race is on to sabotage the post office. They’ve cut back on the overtime needed to get your mail delivered on the day it’s supposed to be. They’re picking up public mailboxes right and left, and hauling them away, so just finding a place to mail your letters, ballots, or anything else, will require more effort. And they’ve removed giant mail sorters from postal complexes all across the country. Congressional Republicans are complicit in all of it. And they've raised the price on mailing ballots, too, so that cash-strapped states are less likely to provide pre-paid envelopes. Not only will people be unenthused about using their own stamps, they're also likely to use too few, thus killing delivery.

These are all stone-cold facts, corroborated by senior post office managers and postal employees nationwide, including the postal worker spouse of a friend of mine. While in theory, I can see where picking up little-used mailboxes might be valid, but certainly not right before an anticipated increase in postal use. And there is zero benign or even valid reason to pull out the high-volume mail sorters, other than “someone” wanting the mail slowed down.

Unfortunately, the ripples reach far more than the political realm. People waiting on paychecks, medicine, and other vital materials are getting screwed, if not physically harmed. Republicans don’t care about any of that, not when they’re going about the business of consolidating their power. (Just like I wrote last week.) They cannot be shamed because outrage will fade but they’ll still have their ill-gotten gains.

I think the Administration will put back some of the sorters and mailboxes, but not until it’s too late to mail ballots. They have to know that a Biden Administration will undo all their work and restore the USPS to where it was. So look for the “magnanimous gesture” that will be too little, coming far too late.

But it’s important to them to monkey-wrench the postal service because all their voter suppression tactics are predicated on in-person voting. Mail-in voting gets around all of these barriers Republicans have put in place to keep likely Democrats from voting:

·        Requiring state-issued photo ID
·        Increasing the price of those IDs.
·        Closing places that issue state-issued photo ID in urban areas.
·        Closing voting precincts in urban areas.
·        Reducing the number of voting machine present in urban areas.
·        Hiring 50,000 “poll watchers” whose job it is to “challenge” any voters (people of color) they see fit. (In the early 80s, this “army” was mostly retired military and police, who question and harass anyone who doesn’t look like a poster boy for Wonder Bread. This tactic has been banned by a federal consent decree since then, up until recently, when the Trump administration allowed it to expire and a judge refused to have it extended.

I keep seeing, in other progressive blogs, pleas to vote in person despite the risks. I warn that that’s just what they want us to do. They want to funnel us into their voter suppression machinery, as described above.

We also don’t want to forget the rampant purging of voter rolls without much in the way of confirmation (that it’s warranted) and Florida negating their state’s public vote to restore voting privileges of ex-felons by requiring them to pay all court costs before they can vote. (Basically, a poll tax.) But those are suppression tactics that work on all methods of voting, not just mail-in.

And in their worst-case scenario, in which the Blue Wave happens anyway, they’ve prepared their case to claim the vote was rigged. So then when the various cases wend their ways through the courts, all the judges McConnell rammed through the Senate begin to pay off. Until then, the more doubt and chaos they can sow, the better for them.

When you put it all together, it shows a massive, coordinated effort to keep American citizens from voting (if they might vote Democratic.) Because while they shur love ‘Murca, they shur don’t feel the same about ‘Mucans. 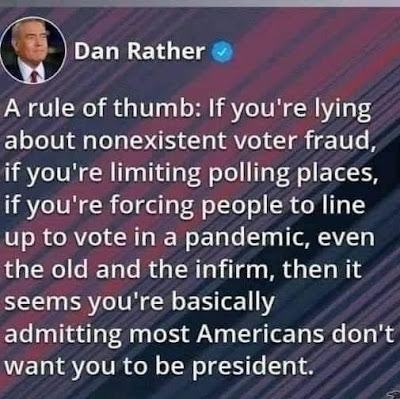 See, this is what they have to do. Their policy positions aren’t going to sway any voters that aren’t already theirs. Are there any new works being proposed? Infrastructure? Tax changes to benefit the non-rich?

No, they have nothing, just fear. Fear of Black people, fear of Brown people, fear of foreigners, gays, trans, Muslims, atheists, liberals and anyone else they think will drive people into their arms.

Maybe if they expanded their interest outside rewarding the rich and placating the religious extremists they use to get elected, they might not have to resort to such un-American activities.

On almost the daily, I wonder how this is real life. Many of us say we cannot wait until November 3, but I think I fear that day and probably several days/weeks after even more. Just hopefully not the next 4 years after that.

We have no choice but to vote like our lives depend on it.

He had ancestors whose family name was Drumpf. They changed it to Trump in the 1600s.