Hi, Call Me Rona. I'll Be Staying a While

At this point, I don’t think we’re going to be rid of the ‘Rona for years. No amount of testing and tracing is going to counteract the willful ignorance demonstrated by the virus “truthers.” The stupidity is running roughshod over social media, with conspiracy theories intertwined with misinformation and denial.

And even when a vaccine becomes available, I guarantee we’ll be having the same fight, featuring people who think Bill Gates is trying to plant microchips in everyone, we’re being sold an unnecessary cure for a bogus illness, vaccines are an affront to their “liberty,” and that it will be released before it’s proven safe.

OK, that last one is pretty much spot on. And someone is going to make some serious bank on it, probably the pharmaceutical company that gives the most to Republican Super PACs. I’m anxious to see a vaccine as anyone, but I’d rather not be the first to try it, not without reading up on the testing protocols and results.

And, even if the vaccines are effective, it’s going to take serious time to get even the willing portion of our 338 million Americans vaccinated.

So a person gets vaccinated. Then what? What’s to show anyone that it’s been done? Are they going to issue COVID Vaccine Photo ID Cards? They ought to, or else anyone could waltz down to the bar, claim to be vaccinated, and infect the whole bar room. ( I know that when I get mine, I don't plan to plunge headlong into a crowd possibly infected strangers, just to crash-test my immunity.)

Combine this limited response with the fact that in the best-case scenario, the adults are put back in charge in January and THEN, maybe, we can have an actual federal emergency response besides, “States, it’s on you; we’re out. (But we’ll gladly take credit for any effective action you might do on your own.)”

One down-side of putting it all on the states is that the states have a varying degree of incompetence, either willing or inadvertently. States like Florida and Georgia listen only to Trump (from March-June) and take it upon themselves to hide, torpedo, or whitewash the data.

Florida is firing state health agency workers who dare to report numbers (the actual ones) the governor doesn’t like. Georgia has been caught on multiple occasions fudging the data on its COVID graphs. On one classic X/Y axis graph, they maneuvered the dates along the bottom (X) axis so they were out of chronological order but produced the declining line the government wanted.

Georgia also manipulated their “COVID density maps,” that showed, via color, where the most cases were by county. They used a floating color scale where the lighter colors meant few cases and the dark blues were meant the most. That’s not dishonest in itself, but over time, the state would change what the colors represented so that you never saw the counties change color. But if you compared the map to the previous map, you’d see that, say, dark blue went from 1500-2000 to 2000-2500.*

*I read this in a blog post over the weekend, to which I was trying to link, but for the life of me, I can’t find it again. (Update: It was one of Infidel753's Sunday links, which he graciously added in the first comment below.) 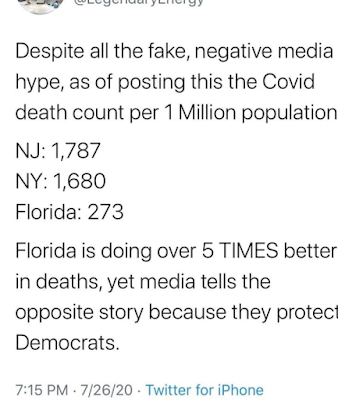 Here’s why this is bullshit. New York and New Jersey became hotspots months ago. They hit peaks in April and May and have been trending down since then. Florida started off slowly but then shot upwards in COVID deaths around the beginning of July. They’re just getting started. 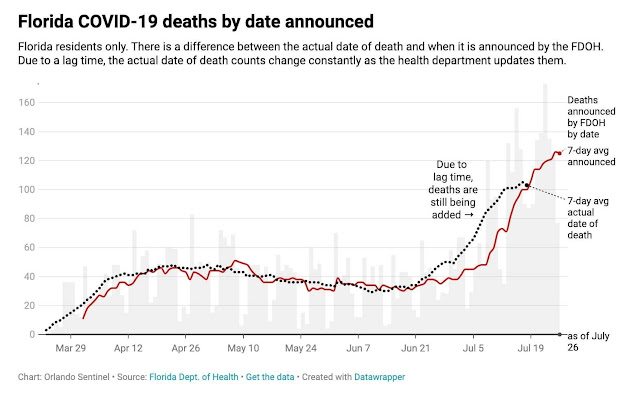 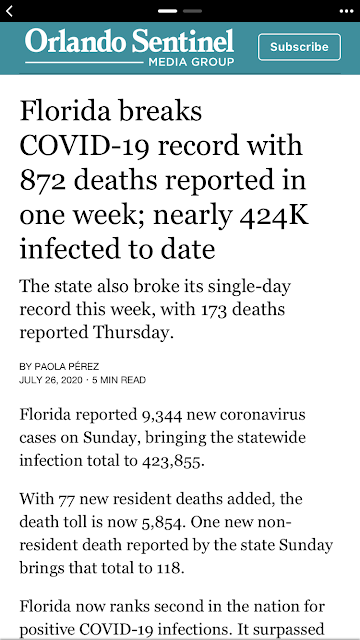 So to compare these states using overall totals, even using percentages to population, is dishonest. We don’t know the full story in Florida yet and with all things considered, it looks like it’s going to be a real shit show. Media hype doesn’t enter into it, but that’s what conservatives want you to think.

They’re perfectly content to let people die as long as the economy takes off again (and thus reflects well on their idiot leader.) I don’t know why it’s so difficult to grasp that the economy is never coming back until this virus is under control. Republicans want the end results, they just don’t want to do what it takes to get them, so they’re going the short-cut route. (Declare victory, move on, and blame the consequences on others.) Meanwhile, 157,000 bodies are stacked up, tens of thousands of which could have been avoided if we had some federal leadership from the outset and the will to do the difficult thing.

Did you ever, in a million years, think America would become such outcasts? All it took was to put Republicans in charge. When the philosophy of a party is to dismantle the government, how can anyone be surprised when they refuse to govern?

Maybe some of the moderate GOP governors will come around under the next administration. That way, with federal guidelines, they can grudgingly take the steps needed to get the virus under control and absolve themselves of responsibility for the short term losses.

I mean, it’s easier to play the aggrieved party and campaign on re-establishing everyone’s “liberty,” than to make an unwilling public eat their philosophical vegetables.

On the Georgia thing, you may be thinking of this. It was in my last link round-up.

On how other countries view our response to covid-19, this is telling.

I hope those vaccine-confirmation cards become a reality. You're right that this is going to be an intractable problem. It's not just Trump, it's the big sub-population of morons.

Yes! That's exactly it. I was going crazy trying to find that from my blogroll. I should have tried yours! But yes, that underlines the kind of intentional disinformation campaign Republicans have no qualms about running. Whatever it takes to maintain power...

Yes, in order to jump-start the post-vaccine economy, we have to be able to identify the miscreants who want the freedom without taking responsibility of actually getting the vaccine. And of course we'll have the inevitable fight over civil liberties regarding the ID cards.

To me, it should be like an "I Voted" sticker. Only maybe with a hologram to deter fraud.

This is so ironic. I was talking to my cousin who lives in Baltimore and is also an Army Vet, and he gave me his theory on "Rona". Basically he feels it's not that big of a deal, and he doesn't know anyone with it. I should also probably mention that he's always been a rebel ever since we were kids, and now that we're older, I just pretty much nod or shake my head in the right parts of the conversation.(lol) Fast forward 2 days later when I get a call from my son who lives in Kentucky and tells me he has Covid-19! He was pretty sick for about 3 days, then it passed. Meanwhile, he passed it on to his fiance who now can't smell or taste anything! So now my cousin didn't mind sharing a few more of his theories tied to this latest news.(lol) Hugs to you and Sweet Pea.

I hope your son and his fiancee recover completely. That's not always a given... Sometimes the 'Rona leaves permanent damages to heart and lung function.

I think the 'Rona is a lot like other social situations wherein one doesn't think much of it until hit hits close to home.

It hit pretty close to home with me when one of our managers at work died from it and I had to have her company car retrieved. This is no joke. People need to listen to medical experts and not Joe from Facebook or Sara on YouTube.

We are not a civilized country anymore. As for a vaccine. Perhaps like my school vaccination I got before 1st grade. It will be big with a scab and everyone knows you got it. :-) God I'm old. Then of course we have the anti-vaccer's and those kelp chewing morons. We are in a heap of s-t and I see no way out of it. I'm afraid to mail my vote in just in case it "gets lost in the mail" I wouldn't put something happening that way with the ole Mango M. so if I have to crawl I am voting him out. I think a chimpanze can do no worse and possibly better. Everyone loves a chimp - a chump not so much. :-)

I remember those scabs... I had one too. Unfortunately they fall off. Maybe I'll keep it in my wallet for confirmation purposes.

In Maryland, they'll have ballot receptacle boxes... I'm planning to use one of those. Our local mail service has been shitty long before the Dumbass in Chief started sabotaging it nationally.

Not that we need another card to carry around, but a vaccination card issued at birth that would have ALL your vaccination data encoded on it would be nice. I know I get asked a doctors offices something like, Did you have chicken pox? My answer is always, I think so. Did you have a shot? I don't remember.

That's an excellent point. I know I got a bunch of vaccinations as a kid, but I have no idea what they were for. Too late for us, but youngsters today still have a shot at that. You know, if they still carry wallets anymore. Maybe we add that to the microchip we put in their necks.