Just a Heap of Blind Rage

Director’s DVD Commentary: This is an off-schedule post because if I wait for next Monday, who knows what fresh horrors will have taken place in the meantime? Plus, I have to get this out of me or I'll have an aneurism.

I was working at my job from our little home office yesterday when my nephew texted me. 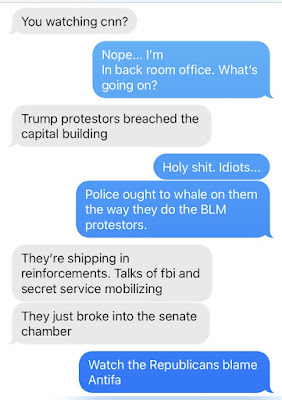 After that, I split time between going back and trying to work, and running into the living room to see what was happening next.

(Pretty much pegged that Antifa prediction, huh? More on that in a sec.)

Our conversation went on: 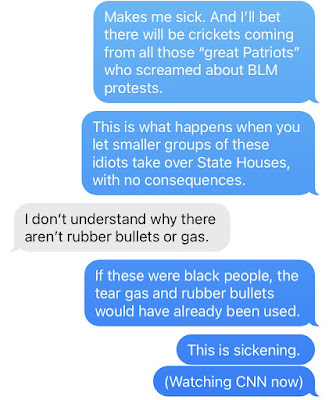 As you can see, my immediate reactions matched up with pundits and Twitterers all over the country.

How was it so easy for them to break in? While I’m sympathetic to a police force being vastly out-manned, they’ve known for months that the MAGAts were planning on demonstrating, already bragging about how much hell they were going to raise. And then, after hearing Trump’s rile-em-up speech, they should have had every man on the force plus the National Guard already in place. It didn’t take a seer to see that this was going to turn ugly.

And you couldn’t help notice the difference between how the police handled these guys versus the BLM protests. They waded into the BLM crowds with clubs swinging and tear gas popping. Anyone in the way got mowed over… women, senior citizens, everyone.

They practically ushered the MAGAts right up to the Capitol.

It was surreal watching all this on TV. I can say, I had quite a visceral reaction, mostly rage. Watching them go through the halls and offices reminded me of what I’m told having your house robbed feels like… a violation. Seeing a picture of one of those morons sitting in the Senate President’s chair made me sick, as did the shot of that man with his feet up on Nancy Pelosi’s desk. The inmates were truly overrunning the asylum. It looked like something out of Animal House. 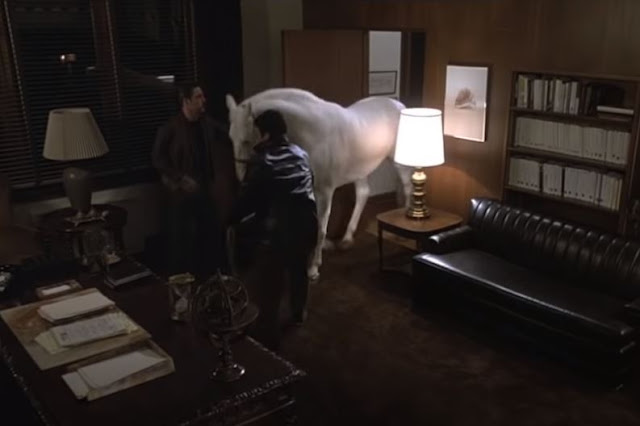 “Is this Pelosi’s office?”

The guy with the Buffalo horns looked like he was about to administer the fraternity oath to the pledges.

Outside, people strolled around like they were on the lawn for a Jimmy Buffet concert, like they didn’t have a care in the world.

And these people are supposed to be the Uber-Patriots? The ones who promote originalist interpretations of the Constitution? (Except for when it doesn’t suit their needs.)

Add Trump to that lot. I don’t know how he could think that the Constitution gave his Vice President the power to overturn an entire election, just because he didn’t like the result. I mean seriously? If that were even remotely true, then why even have elections? Just ask the sitting Vice President to decide. Jesus tap-dancing Christ!

This siege has very deep roots and has been building for years. I put the blame right at the source… Fox “News” OAN, Rush Limbaugh and his ilk, and Newt Gingrich.

All have been instrumental in not only pushing stories that were patently untrue and making the Democrats out to be the “enemy,” sub-humans who want to take everything away from God-fearing, White, “real” Americans. People who only want to lay around and take handouts from hardworking conservatives. They invented the zero-sum politics under which we now labor.

Now, they’ve been telling their cult that those evil Democrats have stolen what was rightly theirs. “They cheated! They rigged it! They took everything away from YOU!” And every word of it was a verifiable lie, designed for a single purpose.

When you repeatedly broadcast a message like that to an audience that’s half ego and half testosterone, with a 3rd-grader’s knowledge of civics, what the hell do you expect? Lively debate? Violence was inevitable.

The whole event is a national embarrassment. With the world watching what should have been a shining moment, setting the stage for the peaceful transfer of power, the president urged a mob to take action, which they seemed delighted to do.

Of course, it’s not like they needed the presidential urging. These people came prepared. They brought a supply of zip ties and built a gallows out front. Think that wasn’t planned? What do you think they were planning? Believe me, those zip ties weren’t for trash bags, filled by policing up the grounds when they were done. They planned to take people from inside and hang them, either with a phony-baloney “trial” or not.

I’m looking forward to when the feds start using facial recognition to identify and arrest these “pat-rioters.” I heard they’ve already been appealing to the public to help identify the people caught on camera.

By evening, I saw the first attempts to blame others. I saw a tweet going around saying that Antifa and BLM activists were identified in the crowd.

BLM in the crowd? Seriously? Did you see that crowd? Finding Black faces in there would be like a real-life Where’s Waldo exercise. Who the fuck are they kidding?

They also claimed that some facial recognition company identified Antifa activists. But according to our friends at No More Mr. Nice Blog, such a company exists on paper only. They have no business, no testing, no licenses to operate. And Snopes has a good debunking of the whole issue. So in other words, it’s total bullshit, thrown out there to deflect blame.

You know, if you’re going to make a statement like invading the Capitol Building, you’ve got to own it. No alibis now. This entire episode has to be hung around MAGA. They planned it, they bragged about it, they brought supplies, and they executed it. There is no “Some Other Guy,” in play here. They have to own it.

It’s our job to make sure they do.

Final note: Congratulations to Senators-elect Warnock and Ossoff. Their election will make a world of difference in the next 2 years, even if it’s only for managing the Senate and operating the committees. And I think Biden should give Stacy Abrams any title she wants, including “Queen.” 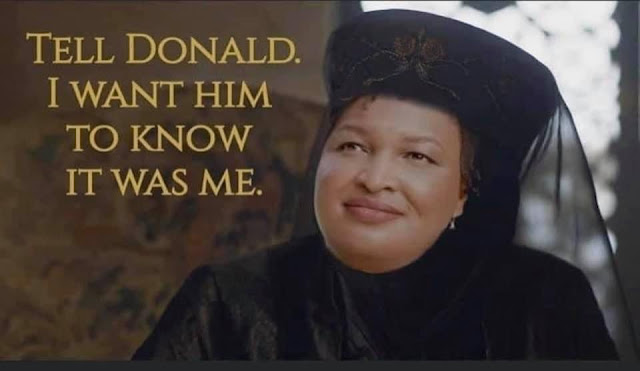 Director’s DVD Commentary: For the first time ever, I figured I’d try to do a “Dry January.” Starting Monday, 1/4 of course. You don’t start a Dry January on a Friday during a holiday weekend. Boy, do I ever wish they made it “Dry February instead!” With all that's happened this week... 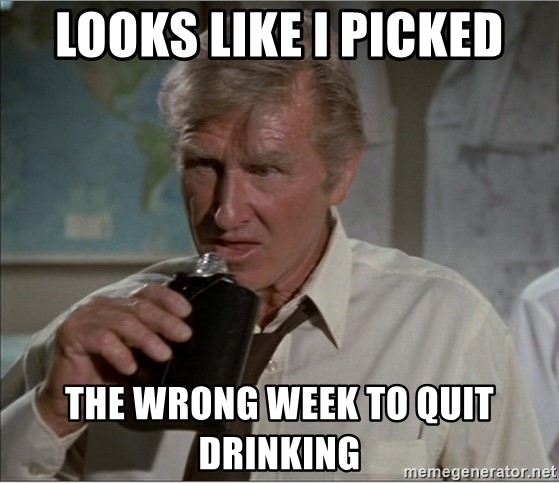