One Day at a Time

With the inauguration of Joe Biden set for Wednesday, this week is supposed to be Insurrection Part 2, The Sequel. I don’t think it’s going to happen that way.

I know insurrectionists were shown not to be the brightest crayons in the box, but I do think they’re smart enough not to try to storm a location that’s ready for them. You can’t escape the reports on TV of the National Guard setting up around the Capitol Building and inauguration area. After all the holes in the defenses on 1/6, from reduced numbers to insider participation, the whole world is watching this time. And they’re vetting which Guardsmen to send as well, to ferret out the closet white supremacists.  There will be no screwing around.

I think the camo brigade knows better than to go up against real military people. The most I expect is some small gatherings around more loosely guarded places or state capitols.

There’s also the matter of underestimating the degree to which their every move was under surveillance. They spent last week watching dozens of people that participated in the Capitol Travesty getting fired by their employers and rounded up from their homes by the FBI. I think Gomer wants to keep his job down at the mill and his ass out of prison.

Although, I’m skeptical about how much jail time these clowns are going to get. These are white people. I bet most will skate with a tap on the wrists. More home detention than prison time.

Still, the blame-shifting and rationalizations continue. I saw this one over the weekend.

As usual, nothing about this is correct. Democrats LOVE walls and cops, as long as they’re doing what they’re supposed to do. Cops are supposed to be the instrument of justice, equal justice for all. We’ve seen that not to be true in hundreds of cases. Walls are supposed to hold up the roofs over our houses and buildings, not to be barriers between free countries. Our greatest national triumph of the 80s was getting rid of a wall.

Not to mention, Trump has had a wall around the White House for at least a year now. This wall from the meme will be taken down as soon as it’s feasible.

This is just a cheap shot using false equivalency, designed to be persuasive to easily persuadable minds.

As I mentioned in my post on 1/7, I decided, for the first time ever, to try a #DryJanuary.

I used to be a heavier drinker than I am now. Anymore, I never drink at all from Monday to Wednesday. My initial goal was to only drink on the weekends, but Thursday kind of crept up on me after getting in the habit of working from home on Fridays, which earns me another hour’s sleep. (Which is less important now, since I’m WFH every day.)

But even on those four days, I drink a lot less. A lot of that is due to my regular sports bar, where I’d go to watch football every Sunday, stopped getting the NFL package. I started going there to catch Steelers games that weren’t televised here in Baltimore, but ended up going every weekend because it was so much fun. But that would usually entail 3-4 20-ounce beers.

At home, I can get through two games on two cans. Then maybe have a drink after dinner.

“What’s the difference between a drunk and an alcoholic?

An alcoholic has to go to meetings.”

So that’s me… more of a drunk than an alcoholic. Maybe even a half a drunk.

But after reading about all the benefits a body gets from going alcohol-free for a month, I figured I’d give it a shot.

I’m doing OK, although events seem to be conspiring against me. Right off the bat, there was a series of stress points that would normally have me reaching for a bottle.

1/6: All hell breaks loose at the Capitol, my reactions to which I’ve well documented.

1/8: We discover that we have a leak under our kitchen sink and can’t get a plumber out here for 10 days.

1/9: I left a bagful of groceries at the store. (I went back for it and they had it for me, so it ended up OK. But it was a pain to have to return there from home.)

1/10: My Steelers got creamed in the playoffs by the freakin’ Browns. That’s enough to drive any yinzer to drink.

1/11: We found out a close family member was diagnosed with an illness much more serious than initially expected. Definitely drink-worthy.

1/11: My Buckeyes got smashed by Alabama in the college championship game. (Yes, I’m a Pittsburgher, but also spent some formative years in Columbus.)

1/12: Learned that my car had suddenly become a target for birdie bombing runs. They must have had a meeting and decided that big blue thing down there was a public toilet and massed in the branches overhead to use it. Every time I’d clean it off, there would be four or five more bombs dropped. One literally covered the top of my side mirror. It got to where I was embarrassed to go through the drive-thru windows. I was waiting for the time I’d get my bag of food and it would have “Shitmobile” written on it. And of course, this was a week that was sunny and nice every day. A hard rain would have been welcome.

1/15: That was the 4-year anniversary of the day I met Sweetpea. No, I don’t consider that a tragedy, but it’s one of the most important days of my life and we usually celebrate. I mean, we did meet at a bar.

Fortunately, that’s been the end of it. Last week contained no atrocities. I’m hoping for the same for the rest of the month. This Wednesday will be the big test.

So yeah, it’s been a test so far but I’ve toughed it out. One of the things that helps is using replacements. I’ll watch a game and drink a can of root beer. 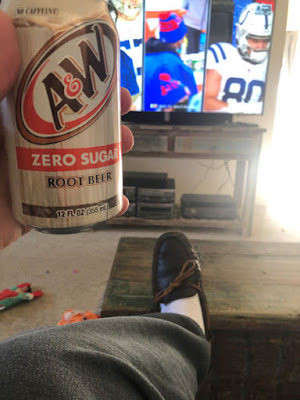 Tasty but not the same.

Or, on Friday or Saturday nights, I’ll pour some ice tea into a drink glass, squeeze in some lemon juice and add ice. It looks and feels like a drink so that’s two issues covered.

It helps that I’ve mentioned it to several people and covered it on my Facebook timeline. The more people know about it, the more determined I am to keep at it.

I’m way too stubborn to give up on a public battle of will.

Although if the inauguration blows up, I might have to go looking for the neighborhood smack dealer.

Oh how I understand so much of this. 30 days is something my hubby is trying right now. I can do it more easily than he can so we shall see. I grew up in Erie so my family was browns fans. (erie was either steelers or browns) I loathe football but I did see they beat the steelers and I know how big of a deal that was. I knew my family was estactic but I also knew my best friends, steeler fans, were unhappy. So I'm sorry you're season has ended too soon.
I'll trade you giving up drinking to me giving up food. I'm still only getting broth. Damn I'm hungry!!

And to think, I thought it was hard to go without solid food for a single day, during colonoscopy prep. I don't envy you, my friend.

Deep down, I can live with the Steelers loss... I know there was zero chance of them beating KC, as the Brownies found out.

Well you are inspiring me - we have imbibed way to much since the beginning of the pandemic and the purchase of a kegerator by his Lordship. I have been thinking about an alcohol free month for awhile now. Maybe today is the day.

Good luck with that, if you go for it. No one says it has to be January. Heck, February is shorter... that's the month to give it a go.

I remember when I was in the USAF, drinking was all the rage among us young people, and the habit snuck into my early thirties. We drank so much that I hardly even had to buy the liquor myself. Someone was always eager to share or purchase a bottle or two!(lol) Friends and family have tried to ply me fruity drinks or hard liquor for special occasions, but I've been a non-drinker for close to 30 years, and yes, it sure was rough at first. These days I'm all for lemonade or sparkling water, so kudos to you for that root beer. For those taking up the challenge, I sure love that idea of giving it a go in February - the shorter month.(lol) Hugs and more hugs and kudos to you! RO

Thanks for the encouragement, RO. Only one weekend left to go! (Those are the hard parts.) Next mission: losing weight.

Uh oh - maybe you can encourage me this time, because my weight loss sure is a slow moving target these days(lol) The world has practically stopped in my neck of the woods (near Raleigh NC) due to a whopping 1 inch of snow and 34 degree weather.(lol) Be well and hope your day is awesome. RO

Giving up alcohol is certainly a way to jump start weight loss. For me, I have to work on smaller portions, and not going in for seconds.

I figure, those are things I can maintain (not the alcohol part.) For me, to give up one thing in particular, like sweets or carbs, just makes them all the more attractive.

I lost something like 40 pounds once, back in my 20s. But I was on my feet all day and working the All Stress and No Money diet, from working as a retail manager. Once I gave up eating at the Roy Rogers across the way, the weight just melted off.

Anyway, you're tough. I'm sure you can find something that works for you. But I'll give you... being snowed in with a full pantry is not the greatest recipe for weight loss.