As angry as I am at the attempted coup at the Capitol building last week, I’m only a shade less angry at the aftermath, wherein Republicans and Trump followers are desperately attempting to rationalize their behavior, shift the blame on to others, and open up new fronts into which they can project themselves as victims.

I saw a meme one of my conservative friends posted on Facebook that almost gave me an aneurism. In a rare fit of righteous indignation, I set off the following bomb on my own Facebook timeline.

Here's why this meme is bullshit. 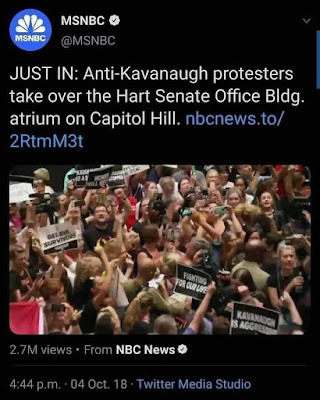 It's the fallacy of false equivalency. The Kavanaugh incident was nothing like the one this week. Here's a description from the BBC:

"Thousands of mainly female demonstrators marched through the nation's capital on Thursday, starting at the appeals court where Judge Kavanaugh currently presides.

They converged on Capitol Hill and held a rally outside the Supreme Court, chanting: "Kavanaugh has got to go!"

Police rounded the protesters up in (the atrium of) a Senate office building after they sat down and refused to budge."

Yes, they sat down in the atrium and about 300 were arrested. Unarmed women. (Even in the meme picture, I can only find a couple of dudes.) How many were arrested on Wednesday? Fox "News" says 70. (Granted, that total will rise as they round up the people caught on camera.)

You know what the anti-Kavanaugh crowd didn't do?

Build a gallows to hang legislators.

Overpower police officers and kill one of them.

Break into and ransack offices

Break into the House and Senate floor.

Take a shit on the Senate floor.

Do all of this based on an easily disproven lie.

The MAGA people did this. They talked about it online, planned it, executed it, and then bragged about it on social media. There was no Antifa and no BLM, it was all MAGA. Now they need to fucking own it.

Using a weak comparison like the Kavanaugh protest is a desperate display of blame deflection and equivocation of that which has no modern equal.

Trump and his followers tried to nullify a clear and lawful election (yes it was) by use of force and intimidation. There is no parallel anywhere with their political opponents. Now they have to live with the consequences.

My friend whose meme I used commented, “Don’t care.”

And that’s the problem with the current political culture. People don’t care if what they post is bullshit as long as it makes their intended point. That’s why we’re in this mess today and I’ll come back to that.

Another friend facetiously commented that they weren’t really true Kavanaugh protesters… Someone used facial recognition software to conclude that they were MAGA supporters disguising themselves in Birkenstocks and BLM tee shirts, aiming to give the protesters a bad name.

To which I responded, “Don’t care.” 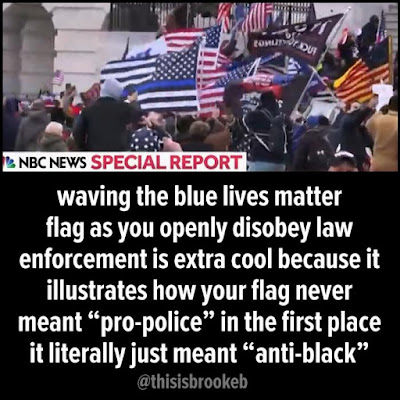 Elsewhere, I’m seeing claims of violations of free speech and censorship because of Trump getting banned from social media, along with other known promoters of violence and insurrection, and Parler getting evicted from their server system.

I appreciate these objections because it shows me who among us doesn’t know how the 1st Amendment works. They yammer on, blissfully unaware that the 1st Amendment is about government censorship of speech. Private companies are under no obligation to support speech that condones violence, illegality, or is just repellent. It’s their platform and they can run it any way they see fit.

The funny part is that the Republicans, themselves, made it that much harder on themselves when they went all out to support bakers and florists’ right not to serve gays. Now when the same principle bites them in the ass, they want to cry about it.

With all the fingers of blame being pointed every which way, I want to throw mine into the mix. I brushed this a little in my last post but it bears fleshing out.

We now live in a society with two separate realities. One where Biden earned more votes and won an election, and one where Trump won in a landslide but unknown Powers That Be conspired to steal the presidency away from him (and his loyal followers).

There is zero evidence that there was any malfeasance in play to steal votes and if there was, Republicans would have presented it at trial. But they had no such evidence and at each turn, they were laughed out of court.

In a sane society, that would be enough, but that’s not where we are. And why is that?

Conservative media. Fox “News,” AON, Newsmax, Breitbart, Limbaugh, Beck, and all the other pied pipers of bullshit have spent years using military-grade persuasion techniques on those most susceptible to them. They’ve been conditioned to listen only to these sources because everyone else is the “liberal media” (which is owned by gigantic corporations).

“Trust US. Don’t trust those other guys. They lie to you. Only we tell you the truth. They think you’re sheep but you’re too smart for them. You just listen to us and everything will be fine. Hey, look at those brown people… they want to take your jobs and steal your property. Look at those religious nuts. They pray to a God who tells them to kill you.”

After decades of laying that groundwork, they can peddle any lie they want and no one will believe any different. Even in the face of overwhelming evidence and in spite of gaping holes in the logic, they believe the bullshit because they want to believe it. They feel good when they believe it.

Then when, inevitably, a complete sociopathic huckster comes along, telling more lies than anyone can even comprehend, they swallow every bite and pledge their devotion.

And that’s how we come to a place where people can be led to attack the center of the government they claim to hold dear, based solely on easily disputed false premises and lies.

They’re only doing what they’ve been trained to do.

There’s only one solution I can see. The government can’t crack down on these outlets, or it could be considered censorship. They could try enforcing “news” standards like they used to, but networks like Fox can just claim that they’re not “news” at all, they’re merely entertainment.

The only people that have leverage are the advertisers, who can stand up and say, “Enough! Stop denying the obvious!” If Fox and OAN can’t make a profit, they will eventually dry up and fizzle out. They have to stay financially viable or they can’t support their own weight.

Now, will that ever happen? I doubt it. There are a few rumblings from companies who are temporarily ending their political spending. Some others cut off their ad buys. But I can’t imagine that’s a permanent change in philosophy. They’ll be back once the heat dies down. And there are too many others who will only be too willing to step in and buy a piece of that audience, who’s already shown that they’ll believe anything.

Maybe, if we’re lucky, all the conservative news outlets will take each other down with in-fighting, bringing a halt to the entire circus.

As a people, we could educate ourselves on recognizing these persuasion techniques and questioning the validity of our media providers, but I’m not optimistic.

From what I can see, people will always believe an attractive lie over an uncomfortable truth.

I hear you for sure. A blogger friend and I were speaking on the phone the other day about the importance of being factual and accurate before sharing memes via social media. Sometimes it may take days of research, but I'd rather take that time than share a statement that's untrue. As a person who believes in peace and non-violence, it's hard for me to watch abusive situations of any kind, and I'm saddened that it's 2021 and people still believe that hurting others to gain control, or to make a point is okay. Wishing you and Sweet Pea an awesome day, and hope that you are both well. Sending lots and lots of hugs, RO

If Republicans hasn't turned lying into an art form, we wouldn't be in this mess. Yes, I know, all politicians lie. But there's a difference between overstating a financial data point and claiming a massive, heavily surveilled election was rigged and stolen from the rightful winners. Heaving that message at low-information, gun-toting morons is a recipe for disaster, or in this case armed insurrection.

Truth matters. I appreciate your efforts to research your posts. I endeavor to do the same. Every little bit helps.