The news of the week seems to be about the negotiations regarding a prospective COVID relief bill. The Dems have their $1.9 trillion version, to which the Republicans countered with a $600 billion version.

Some of the highlighted differences are that the Republican bill lowers the direct payout from $1400 to $1000 and lowers the level of maximum eligibility from $75k for an individual, $150k for a couple to $50k/$100k, removes the increase of the Federal minimum wage to $15, rolls back the extension of unemployment benefits until June instead of September and resists upping the payout from $300 to $400.

Ten Republican senators came up with this compromise bill and that’s significant in that it will take ten senators to vote with Democrats to get this thing past a filibuster. I’m sure that’s their way of assuring the Administration that they won’t pull the football away from them like they did during the Obama administration.

Some of the changes I can go along with. For example, lowering the maximum income requirement to receive direct checks seems OK to me. Yes, that would eliminate my household from receiving a check. I’m as happy as anyone to receive a chunk of money from the government but I can’t say that we absolutely need it. I think it should be limited to those who literally depend on it. If it will get the thing passed, I’m willing to give up my stake.

Also, while I’d prefer that checks for $1400 go out, how useful are no checks? More is better but none is a non-starter. What Republicans don’t seem to understand is that putting money in the hands of those who desperately need it will end up going right back into the economy. And that’s where they all seem to talk about, the economy. They’d just rather send the money right to all the corporate CFOs and pretend they will lower prices, raise wages or create more jobs. (But they rarely do. Most of it goes toward stock buybacks. Sure pays out for the stockholders though.)

I think Biden needs to hold firm on the minimum wage though. Every single time during my life that an increase in the minimum wage is proposed, conservatives cry that it will lead to skyrocketing prices and massive job losses and then it never does. Again, this is money that goes right back into the economy.

If Republicans hadn’t been so intransigent on raising the minimum wage since 2009, we wouldn’t need to double it now. Incrementally would have been better but they prevented that so now we have to do it in one big chunk. They made their own bed on this one. Every chart you see on the subject shows inflation rising, prices rising, executive pay rising, but minimum wage is flat. This change is long overdue.

They always make comparisons like a full-time minimum wage job would have burger-flippers making the same salary as teachers/EMTs/soldiers/fill in the lofty profession of your choice. All that tells me is these other people are also woefully underpaid. The answer to stagnant wages is not suppressing the pay of another demographic.

Maybe Biden can horse-trade with the 10 GOP senators. A bipartisan bill would be better than it being completely one-sided, but it shouldn’t be the only consideration. Biden should say, “If we can’t work something out together, we’ll pass a bill without you that you’ll hate even more. And we will gain votes by doing it too. So jump in and help us get help Americans or get out of the way.”

And maybe if they can work it out, it could lead to further cooperation on other bills. Wouldn’t that just chap Mitch McConnell’s ass?

The rank and file Republicans remain riled up but are still not capable of making a valid point. 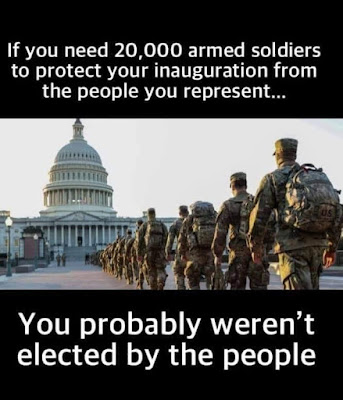 This one is particularly irksome because there is really no cause and effect; just two statements put next to each other, without a causal relationship. Here’s the same argument in other words:

“If you get into a car crash, it was probably Russian assassins”

This overlooks the fact that you were driving the wrong way down a one-way street. Just like the meme overlooks the fact that an armed mob of right-wing self-proclaimed patriots broke into the Capitol building, beat police officers who tried to hold them back, ransacked the grounds, stole stuff, and attempted to kill legislators.

Don’t you think that m a y b e that had a little more to do with the military protection than a vague assertion that there was a massive effort to rig the election by state governments from both parties, which left no evidence or credible witnesses, no electronic or paper trail, and only affected the presidential race, leaving Senate and House races alone? 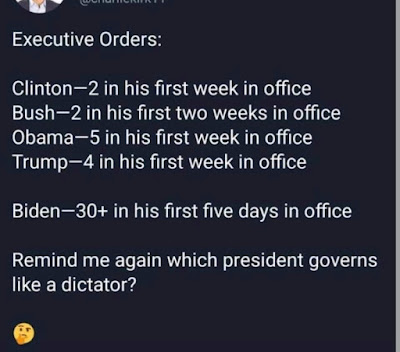 First of all, why is the number of executive orders from the first week or two in office matter more than the grand totals? It’s only relevant because they wanted to do the meme now.

The larger issue with this meme is the missing context. No one really complained about the number of executive orders until the Republicans started calling Obama the “Imperial President” because of his use of them, which was, in fact, less than his predecessor. Then Trump came in and issued them like they were pardons for his friends and Democrats objected, apparently thinking Republicans actually disagreed with EOs. Just like with the deficit, Republicans are only against governing by executive order when it’s not their guy issuing them.

Here’s a chart I ran in 2019, showing the number of EOs by president. 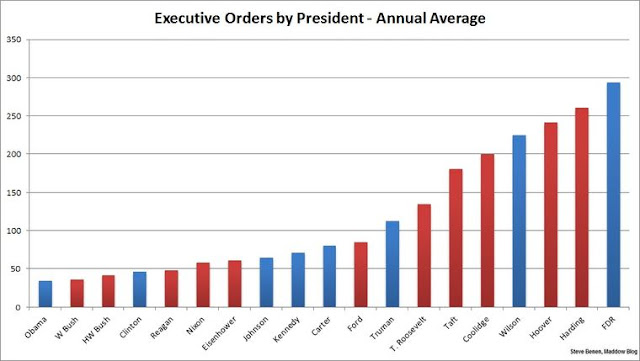 You can see that the use of EOs has steadily decreased over time. And then Trump issued 220 of them over four years, for an annual average of 55. Look what that would do the curve. Now, do you see why Democrats objected to Trump's EOs?

So now when Biden comes in with a mandate to overturn the executively ordered malfeasance unleashed by the Trump administration, EOs are a big deal again? Get the fuck out of here with that. This is a fake outrage or at least a hypocritical one. 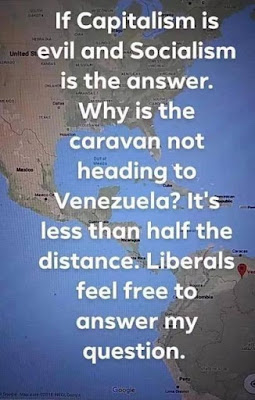 Conservatives love to point to Venezuela when it comes to socialism. They always seem to forget about socialist Canada, Denmark, and the Scandinavian countries, all of whom test higher for their population’s general happiness than the US does.