As expected, we all saw the prospect of an impeachment convicted president go swirling down the toilet this weekend. I almost raised my hopes by a smidgeon at the early Saturday report that there were going to be witnesses. But that evaporated into the ether along with the backbones of 43 Republican senators.

Then to further muddy the water, Mitch McConnell gets up and rails about how Trump was responsible for the Capitol onslaught. I was thinking, “Mitch, didn’t you just have an opportunity to put some meaning behind that claim just a bit ago?”

But I see Mitch’s game plan. Sure, he doesn’t want Trump to continue sullying the GOP’s reputation… that’s HIS job. No, really, Mitch wants the guy gone, but he DOESN’T want the responsibility of having done something about it himself. He’s trying to avoid having the MAGA idiots come looking for him, so he’s trying to thread the needle by voting to acquit, to calm the riffraff, and then kicking it to the courts, to save face with the rational people.

It’s all so very principled and courageous, isn’t it?

Mitch will always do whatever it takes to acquire, solidify and maintain power, regardless of the logical paradoxes it creates. If he has to rail against Point A for six months and then turn on a dime to promote the same idea if it should suddenly serve his purpose, he’ll do it and not lose a minute’s sleep over it. (See: Supreme Court Nominations.)

Now we’re being treated to the sight of Trump claiming he’s been vindicated because of course he is. To him, whether he wins or loses, he claims victory, overwhelming victory, landslide victory. In this case, he won over 86% of people from his own party and 0% of opponents. There was no question as to his guilt or innocence. The House Managers had this case signed, sealed, and delivered.

See, this is the of bending of reality embodied by Mitch McConnell. And for him, it was even more twisted. He refused to schedule the trial before Trump left office, and then cited his not being in office as a reason to acquit. I mean, the guy’s completely shameless.

It’s a tactic the Trump Administration adopted for themselves, to try to influence the election:

·        Spend months claiming mail-in ballots were rife with fraud, were unreliable, and were to be avoided.

·        Assign a lackey to run the Post Office, who takes direct action to slow down mail delivery, to ensure poor performance and erode confidence in the institution.

·        Then, when he’s ahead in the vote count prior to the counting of mail-in votes, he claims he won because the mail-in votes are inherently fraudulent. And he uses the States’ opting to make allowances for the difficulty of in-person voting (extended deadlines, longer early-voting periods, more drop boxes,) as a lever to legally stop the count.

·        He cries that because the mail-in votes are coming predominantly Democratic, it has to be fraud, overlooking the fact that he convinced his party to vote in person and shun mailing ballots. So naturally, the mail-in ballots would skew Democratic, because he ensured it would be that way.

I don’t see how they can look themselves in the mirror after engaging in such obvious ratfuckery. I think they just don’t care, because having power justifies everything. And because they’re in bed with the evangelicals, they claim that whatever they do is blessed by God, just because it was they, “The Chosen Ones,” who have done it. In other words, the "C-Street House Doctrine."

The MAGAs revel in the ratfuckery. You can tell just by the memes they pass around. In fact, they’re eager to do it themselves. I saw this little gem over the weekend. 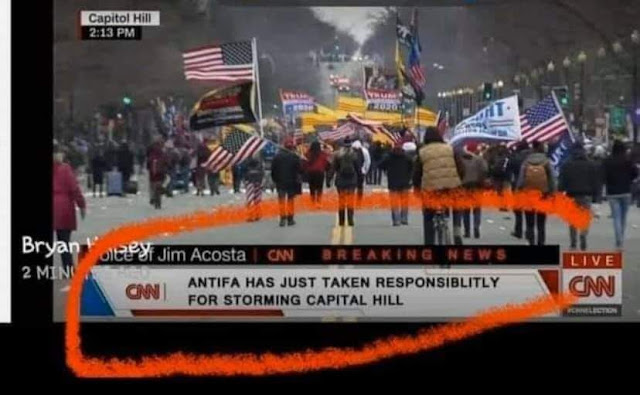 Right off the bat, I knew it had to be photoshopped, if for no reason but Antifa doesn’t really have a headquarters, spokesperson, or organization. Antifa is anyone who says they are.

Then later, when I looked a little closer, I saw the glaring tell: out of nine words, there were two misspellings. Hah! I saw the Capital/Capitol error right off. Took me a little longer to notice “Responsiblitly.”

I was going to respond to the poster but by the time I found it again, someone else had already made my points for me, plus adding that this wasn’t even CNN’s font, so I decided to let it ride there and just talk about it here.

But here’s the thing I keep coming back to. Someone took the time and effort to photoshop an entirely different headline into that CNN chyron and sent it out into the world to con people. And they knew it was too good to question for people who desperately want to believe it. Whatever it takes to get the blame for the insurrection off them and onto their perceived opponent.

I find that telling. It tells me that these people can’t win an argument on merit so they have to lie and distort and just make shit up. And if you call them on it, you’re just “sucked in by mainstream media.” (It goes back to that “Fact Checking = Censorship” meme I talked about last week.) 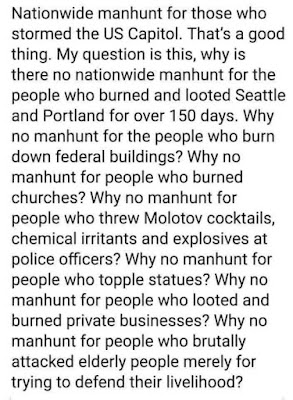 This one is supposed to come across as reasonable, but as usual, if you scrape a little bit, most points come off as hollow.

Here’s how this argument falls apart:

·        There is a very effective manhunt going on for the Capitol Insurrectionists for some damned good reasons:

o   They’re recorded on tape from security cameras, making their identification a lot easier. And many of those who weren’t immediately ID’d got turned in by family, friends, or exes. (LOL.)

o   There are also the geniuses who put themselves on social media while in the midst of the insurrection, making it a cinch for the feds to go scoop them up.

o   IDs were made easier because so many of these dipshits refused to wear masks.

o   Trying to kill politicians to facilitate changing the results of a lawful election is far more important than mere vandalism. That threatens our very democracy and way of life.

o   They attacked and injured cops, killing one. They did this up close, not by throwing rocks from a distance. They beat cops with flagpoles, for cryin' out loud.

·        There’s not nearly as much useable video of people committing the alleged offenses because much of it was at night and people wore masks. You have to have something to go on for a manhunt, more than "some dude in a hoodie."

·        This is an apples to oranges comparison, trying to compare the reaction to a threat to our nation against a series of exaggerated incidents. They’re not the same, therefore the reactions needn’t be. This just another desperate attempt to get fingers pointing in someone else’s direction.