Finally some good news… this weekend saw the COVID Relief bill pass the Senate, (after considerable delaying tactics and pointless obstruction from the Republicans), so now it only needs to breeze through the bill-friendly House and then help will be on the way.

The Senate passed the bill 51-50, with the Vice President breaking the tie, meaning it was strictly on party lines. Every Republican voted against a bill that’s popular with over 60% of the country. (And I have to think that the 40% of the people with whom it’s not popular only think so because that’s what they were told to think by Republicans and their signature noise machinery at Fox “News” and OAN. The big bugaboo is that there’s extra stuff in the bill.

I’ll pause while you get yourself back up off the floor.

It’s like they all just noticed that creating legislation is like making sausage.  You don’t want to know how it was made, you just slap it on a bun and cover it with mustard.

When the Trump Administration got their tax bill passed, there were all kinds of sweetheart deals, and not even hidden! I mean, everyone knew that they created a $500 billion slush fund to distribute, without documentation, to pretty much anyone they wanted. No calls for a stripped-down bill there… 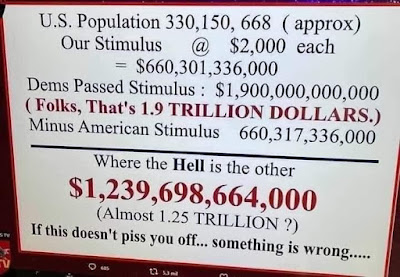 This must have been created by someone who flunked government classes and gets all his “news” from Fox. Everyone already knows that there are a ton of issues being handled here, aside from the direct payments. There’s money for reopening schools, money for childcare, extended unemployment benefits, housing assistance, small business loans, local government assistance, money to bolster vaccine distribution, lower rates for Obamacare insurance… the list goes on. All of it is highly necessary right now.

It was last year too, but the Republicans couldn’t be bothered with it. Hey, the stock market was fine, why should they worry about the rest of us? The only reason we all weren’t bathing in champagne was because of our poor money management.

If funding for some other pet projects turned up in there, so be it. Maybe if Republicans had shown up to negotiate in good faith, they could have done something about it. But that didn’t happen.

So, just pretending that the bill was nothing but the direct payments is willful ignorance at best, outward deceit at worst.

The real shame is that they punted on addressing the minimum wage. It’s criminal that the minimum wage hasn’t changed in over 10 years. If only Congress had found a way to incrementally raise the rate we wouldn’t be in need of such a dire raise now. And the tragedy is that even a $15.00 minimum wage is grossly insufficient.

It’s a given that Republicans won’t cooperate in raising the minimum wage; hell, they don’t want there to even BE a minimum wage. They’d rather leave it to The Market that they worship so much. And then we’d be back to the sweatshop business model that works so well for big businesses with production overseas.

It’s more bothersome that two Democratic senators kiboshed the whole thing. It makes me wonder who they’re really beholden to. Raising wages for lower and middle-class workers is a customary plank in the Democratic platform. And between normal inflation and the pressures from the pandemic, there is a screaming need for better wages, which, remember, mostly go right back into the economy. When people have money in their pockets, it gets spent. Everybody wins.

The 1% doesn’t see it that way though. Payroll is always a huge business consideration and there invariably pressure to keep it as low as possible. Higher wages affects short term profit, so the Powers That Be work hard to convince the Rank and File that “burger-flippers” making more money would adversely affect their lives.

I’ve said this before throughout my life, (a considerable amount of which was spent working retail), every time there was a proposal to raise the minimum wage, conservatives went nuts fighting it, claiming that the cost of burgers and pizza would soar through the roof. And then the rate would raise and none of that would happen. People like me had more money to spend at the stores. It’s no different now.

So on one hand, I’d love to see the two “traitorous” senators harassed into oblivion for ignoring the needs of the nation’s working people. But on the other hand, we can’t push too hard lest we drive one of them to start caucusing with the Republicans, thus losing control of the Senate for the Democrats. It would be “game over” at that point and Joe Biden might as well take up golf.

So progressives need to understand that while some big moves are wanted and needed, we can only do as much as our most conservative Senators will allow. If we want to dull the influence of Manchin and Sinema, elect more Democrats in other states, so we no longer require those two for every bill.

I saw another misleading meme this weekend: 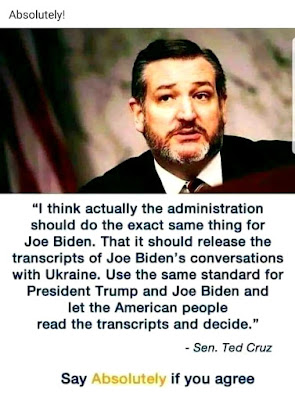 This just goes to show that Ted Cruz will say anything at any time if it will serve his purpose.

There is a big part missing from this equation, which is typical for such conservative memes. In this case, in order to treat Biden the exact same way as Trump, then the situations would have to be the same and they’re not even close.

The missing piece is that there was an eyewitness who was on the call and had impeccable credentials, who filed an official whistleblower report, alleging misconduct. (Which turned out to be accurate. Not to mention, the accusation caused a massive cover-up, with transcripts getting locked away on a secure server, available to only the very top staffers.) Once that happens on a Biden call, let’er rip. But until then, STFU and STFD with your half-assed innuendos Ted.

This is “absolutely” bullshit.

Republicans never acknowledge that a $15 minimum wage would merely bring the US more into line with the normal standard among developed countries.

Of course, a developed country is what we increasingly no longer are, thanks to them.

Manchin's opposition to the minimum wage is somewhat understandable given the economic condition of his state. It might have made sense to adjust the higher minimum wage for the cost structure in different parts of the country. Sinema's case is weirder. Just seven years ago she was calling for an increase. I guess her little thumbs-down performance was meant to echo McCain's no vote on destroying Obamacare a few years ago, but the idea that the two cases were in any way alike is bizarre.

The Sinema case makes no sense, for reasons you mentioned. Makes me wonder who got to her. Somewhere, a switch got flipped.