Well, Georgia went ahead and did it, they passed their onerous anti-voter bill, or in other words, Jim Crow 2.0. This is the bill that not only restricts absentee ballots but also reduces drop boxes and early voting opportunities, and famously forbids giving food or drinks to people in the long lines they just purposefully created.

Republicans are now saying it right out in the open. They cannot come up with any policies that will draw middle and lower-class votes, so they’re trying to reduce the number of voters. This is your “God, country, and apple pie” party. And now, it better be their God and their country and no foreigners better have picked the apples for that pie.

Regardless of the optics of their actions, the messaging machinery is out working in overdrive to convince people that they’re just trying to keep voting secure and that IDs are just the normal way of life. This meme is bullshit on two levels. First, there’s the veracity of their examples. Out of all of these, banking is the only one where ID is required in every case.

·        Alcohol and cigarettes: Only if you look young, or in the rare case when an establishment cards everyone as a policy. I haven’t been carded in over 10 years, and then it was at a ballgame where they carded everyone, including senior citizens. But in almost every other case, obvious adults don’t get carded. And even then, it’s not about establishing identity, it’s for age only.

·        Buying a house: Only for the banking end of it if you need a mortgage. If you’ve got a couple hundred thousand to drop on a house, no one is going to check your driver’s license before taking the money.

·        Get a job: Do you think the migrants who picked your salad or cut your grass had to show a driver’s license?

·        Buy a gun: If you go to a gun show with cash, you’ve yourself got a gun. That’s a loophole that, against the lobbying wishes of Republicans and the NRA, reasonable people are trying to close.

So, the need for ID is only in particular situations, like the traditional, by-the-book, white professional cases. You know, those who already have driver’s licenses. The need for IDs is wishy-washy at best, which invalidates the basic thrust of the argument.

But, even if you accept that premise and stipulate that IDs are needed for these various transactions, it is still misleading in that it’s only part of the Republican track record on voting.

It’s racist because they, “with surgical precision,” promote the use of IDs that minorities are least likely to have and dismiss the ones that they do. Driver’s licenses and state IDs are in, WIC cards, SNAP cards, library cards, and student IDs are out.

Then they make it harder and more hurtful to obtain the “proper” IDs by closing DMVs in urban areas and raising the fees the citizen has to pay.

Republicans only want to show you this one card, “ID requirements are normal,” but keep their other cards hidden. Just because you have an ace in your hand doesn’t mean it beats a full house. You have to evaluate the entire hand and theirs stinks. It’s racist, autocratic, and blatantly un-American. Because after their ace, all they have in their hand is a deuce, a four, a Monopoly “Chance” card, and an Old Maid.

Actions like Georgia’s makes it clear that Congress must pass HR1, to ensure that racist shenanigans like this doesn’t fly. At least until the new Supreme Court can shoot it down.

So, Republicans can’t logically complain about progress on COVID, they can’t complain about the economy not coming back, OK, they try to “cancel” unfriendly entities as much as anyone, and they can put forth conspiracy theories that posit that the Clintons were behind that cargo ship getting stuck in the Suez Canal, but there’s always a batshit crazy theory to kick around. All they have left to work with is immigration. Work up that fear of ferners to keep the white men on edge about losing their influence! 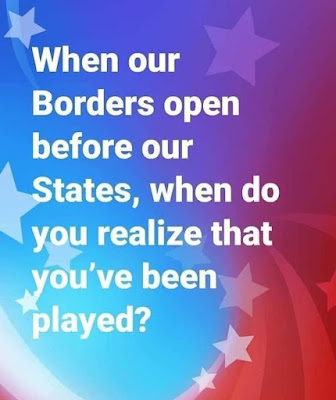 When I initially saw this, I was like, “I thought Borders went out of business after being clobbered by Barnes and Noble.” Yeah, they have to get their capitalization under control.

And it always annoys me when they use the term “open borders,” which implies the border looks like the start of the Boston Marathon, rather than a TSA line.

This is another one that’s just wrong, in that a bunch of states are already open, with more opening every week. I’m not saying that’s a good thing, but it will sure keep hospitals in business.

But that aside, there are different criteria at play here.

With one, the Powers That Be have to weigh the inevitable spike in infections that comes with opening back up for business versus the economic and employment issues.

With the other, it’s a humanitarian crisis of what to do with the thousands of people who are already bottlenecked there, waiting for word on what’s going to happen to them. It’s not theoretical, it’s happening in real-time and has real consequences.

Republicans just don’t like it any time an immigrant makes it across the southern border, hence the heated rhetoric. They’re perfectly fine with stalling them in Mexico or wherever, until they either go back home or die. As I’ve said before, their position on immigration is being against it. How very un-Christian for a party that claims to have the highest reverence for Christ.

In fact, it’s quite similar to their stance on voter IDs.

·        Require legal pathways to citizenship but then choke off or eliminate those pathways.

At this point, they should just make moving goalposts an official party plank. (IF they ever get around to drawing up another platform.) 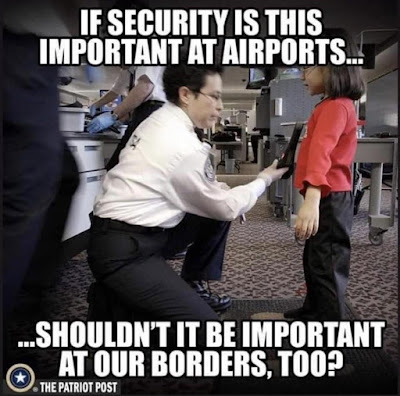 This one is also wrong, right out of the box. Who says they don’t take security measures at the border? It strains the imagination that immigrants would be able to bring bags or packages into the country without being checked. I mean, how many shootings or explosions have there been in these camps? Zero. (Not including people ICE have killed, of course.) If guns or bombs were coming through, don’t you think there would be loud, booming evidence of that by now?

Whether they’re wanded or not doesn’t much matter. They’re not boarding a metal cylinder traveling at 600 mph at 30,000 feet. Air travel should have more security involved than walking across an imaginary line.

The attacks on immigration and minority voting are all just part of Conservatives’ plan to Make America White Again. They might as well put it on their hats. And this guy should be their mascot. 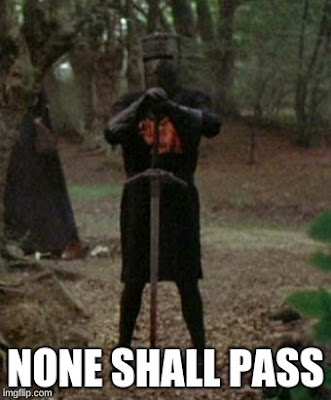