Just as sure as all the crazy-ass people started shooting up their neighbors and co-workers as soon as they could get out of the house, we have the crazy-ass gun nuts rushing to defend their beloved penile proxies. This was one I saw over the weekend and it makes about as much sense as the book it cites. 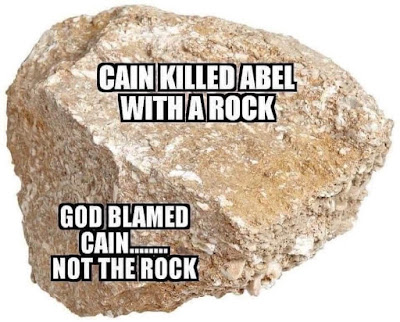 I could use an Atheist defense and dismiss any argument based on the Bible (especially the Old Testament), as being based on folklore and mythology, but then I’d have to come up with something else to fill up this post.

So even if we accept the tenuous premise that the Bible is a relevant defense, there are still problems with this argument. We can start with the fatal flaw that it contains an invalid comparison. It’s the same flaw that damages most pro-gun arguments where they cite other items that can be used to kill. But when someone can use rocks (or knives or bats) to kill dozens in seconds, from a distance, then you can compare the two. But until that happens, these other minor instruments can be easily repelled and are not in need of regulation. (First line of defense: Be out of arm’s reach.)

I also wonder, can God really find fault with some guy who killed his brother when He, Himself, slaughtered thousands of children (according to His press kit), for no more reason that they belonged to the wrong people? God was the biggest murderer in the Bible. It sounds like a “Do as I say, not as I do” kind of situation, which is probably why it attracts Republicans.

OK, hold on… maybe THIS was the Rock that killed Abel, and maybe Goliath as well: 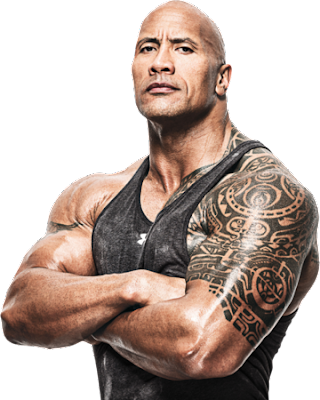 Maybe they have those stories all wrong. Maybe after all this time they’ve been taking The People’s Elbow for granite.

Here’s another meme I’ve been seeing that bugs me: 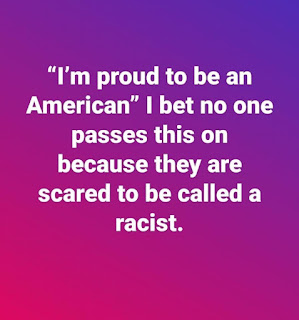 I’d be prouder to be an American if the writer knew how to punctuate. I’d be prouder still if they weren’t quoting some schmaltzy Lee Greenwood song. But most of all, I’d be proud if they’d realize that being American isn’t a race and therefore cannot be an instrument of showing racism.

Being American is a nationality and it’s to our benefit, as a country, that we’re made up of multiple races. Merely proclaiming one’s self an American shouldn’t make anyone feel racist. Feeling “Nationalist” is another story, but that’s not what this meme says.

Ultimately, I think this is more of a strawman argument. All these memes talk about how “others” (usually Muslims) are offended when we fly the flag or claim to be American. Who, exactly are these people? I’ve never once seen or heard of someone claiming to be offended because of the presence of the flag. We can fly our flag and they can fly their flag, (whatever that may be.)

Although to be honest, have you ever seen what conservatives do when they see a non-US flag being flown? Cue the hissy fits in 3… 2… 1… Go.

I’ve been sitting on this for a while but have not found the proper time to post it. But it just goes to show that word choices matter. Consider this headline I snipped from my Yahoo news feed:

My first thought upon seeing it was, “Tracy Morgan had awkward sex with Hoda Kotb??” It made me chuckle before I eventually worked out what they were trying to say. Later that day, I saw the amended headline:

And with that, dignity was restored to poor Hoda Kotb.