Evaluating the Power of One's Convictions

While I was happy to see the conviction of Derek Chauvin on all three counts, it’s hard for me to get excited about it. I know a lot of people were expecting a giant OJ-sized curveball but I wasn’t one of them. I was sure he wasn’t going to walk because this was a case unlike so many others.

First, the video evidence was incontrovertible. It captured the before and after, by different people from multiple angles. There was nowhere to contest that what everyone saw wasn’t what happened.

Next, this dance is getting old. We’ve seen all kinds of contortions performed to alleviate abusive policemen from consequences. The public was going to rage across the country if justice wasn’t served.

Also, in this case, you had police testimony… the good cops finally stood up… where they said this was not what they were trained to do and it was not department policy directing his actions.

Lastly, half of the jurors were Black, which is not to say their vote was a given, but they would be much harder to sell on phantom exculpatory evidence. The blind support of law enforcement espoused by so many white people would probably not be in play here.

With all the evidence presented, video, police and medical testimony, and the laughable defense arguments, there was nowhere else for them to go other than guilty, at least not without massive bribery. This case was a slam dunk.

I’ll feel better about the efforts to hold cops responsible for egregious abuse when decisions start coming down in cases that aren’t this water-tight. I’ll be happy when good cops testify against bad cops when there isn’t complete video evidence, but they saw something that happened and it wasn’t right.

I’ll be happy when we stop seeing police reports that have to be retracted when witnesses or video contradict the initial statements.

I’ll be happy when police departments are staffed by those who use their badge to serve the public… ALL the public, and not to justify violent, sociopathic behavior.

I’ll be happy when people aren’t executed for holding cell phones, sandwiches, or anything else that short-circuit a cops brain into thinking he’s in mortal danger.

And we still have to worry about the decision getting overturned on appeal, or a sweetheart sentencing deal.

So this is a good step, but only the first one. We have several staircases yet to go.

It was with great sadness last week that I learned of the passing of Jim Steinman. Along with writing songs for Air Supply, Bonnie Tyler, and Celine Dion, Steinman was best known for his work with Meat Loaf. Steinman wrote several albums for Meat, most notably his debut album, “Bat Out of Hell,” which racked up enough sales worldwide to become the third best-selling album in history. It’s also my favorite album of all time. 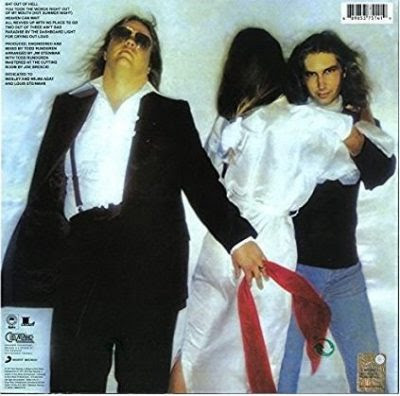 Meat Loaf and Jim Steinman on the back cover of Bat Out of Hell.

I’ve written a lot about Meat Loaf in the past… about how I first discovered Bat Out of Hell, when I got to meet him, and how Bat Out of Hell was my good luck charm for bad-weather driving. (When the snow was flying, I’d put on Bat and I knew The Loaf would get me home. Or if I smashed into a pole, at least I’d go out to some good music.) I also wrote about how the first time I ever got to see him perform on TV, I tuned in hoping to see him do Two Out of Three Ain’t Bad or Paradise by the Dashboard Lights, but it turned out to be some duet with Cher.

I think Meat is the greatest pure rock n roll singer ever. I’d put the note he hits at the end of Bat Out of Hell up against any rock artist across time and space, just for power and savagery. But as his long and checkered career has shown us, he’s nothing when he’s not singing Jim Steinman songs. It was Steinman’s vision to create a symphony of guitars and bombast, married to Meat’s sonic boom of a voice. Steinman would create this huge calamitous climax to a song and Meat would belt it out of the park.

Steinman may have an annoying habit of lyrical repetition within a song, (his songs would be about a third as long if he cut the repetition), but not many were better at the clever turn of phrase.

Title track for “Bad for Good,” Steinman’s solo album that was supposed to be the second Meat Loaf album, except the Loaf developed throat problems after touring and couldn’t sing.

“I know you belong, inside my achin’ heart/And can’tcha see my faded Levis, burstin’ apart?”

“For Cryin’ Out Loud,” the most powerful love song I know, into which he finds a way to fit in a dick reference.

“Surf’s Up,” from Steinman’s solo album, which Loaf covered shortly after. The song is basically one extended dick reference.

“I know you’re looking for a ruby in a mountain of rocks/But there ain’t know Coup DeVille, hidin’ at the bottom of a crackerjack box.”

“Two Out of Three Ain’t Bad,” which everyone knows. (Or should.)

The classic climax to “Paradise by the Dashboard Lights.”

Yes, Jim Steinman was definitely an acquired taste. But he was responsible for one of the greatest albums in rock history and a bunch of other damned good songs. He will be greatly missed.