Beware the next apparent affront to personal freedom, the “Vax Passport.” Right-wingers are already going nuts over the thought that there might be some kind of requirement for proof of vaccination before being allowed to participate in various formerly common endeavors.

I touched on this last December when debunking a meme claiming Liberals loved Vax IDs but not Voter IDs.

“If people are going to want the regain the freedoms to eat out, see movies or otherwise assemble without wearing masks, they’re going to have to demonstrate that they’ve had the shot. It’s not like you could take someone’s word on it. People are already lying about having “a medical condition” that keeps them from wearing a mask. So if not a card, then what? Chip implants under our skin? I’m pretty sure the Right would kibosh that on the basis that we’re already getting “chipped” by Bill Gates and the vaccine.

“They also ought to have something to differentiate someone from having one shot versus having both. Different colored cards, maybe? Or they can combine it with the flu shot or shingles shot and make it a punch card. After five shots you get a free small order of fries.”

Only Republicans would complain about life not being the way they want it and then actively work against efforts to make so. Look, this isn’t about some amorphous idea of “freedom,” this is the life and livelihood of everyone in the country at stake. They want you to show IDs to vote; how is that allowable, while showing you’re not at risk for COVID is not? (You know, using rational arguments, not “but we’ll lose otherwise!”) Whenever there’s a public need to do something, you can count on the Republicans to cry “But freedom…” Judging from their reactions to Michelle Obama, it includes eating their vegetables too.

A lot of it is because their news sources are awash in disinformation. People are railing against Biden’s involvement, yet there is no government-run proposal even on the table. So far, this is a 100% private enterprise.

If they really want to fight the prospective vax-passport, they should try another angle. When I first wrote about needing to prove you had the vaccinations, we didn’t quite know what they would do. I was under the impression that it would ward off catching the virus. Now they say you can still catch it, still spread it, but the vaccine keeps you from getting seriously ill.

So if you can still catch and spread, what’s the point of identifying who’s had the shot? Everyone should still be masking up until herd immunity is achieved.

Maybe it has something to do with business liability. People who don’t get deathly ill are unlikely to sue the establishment where they caught the bug or the municipality that approved the business rules. As usual in modern America, lawsuit avoidance is driving the culture.

It just sounds like more security theater to me, like taking our shoes off at the airport. But if a vax passport will allow me to do more of what I want to do, I’m in. No skin off my butt.

And now, onto some of our customary debunkery. 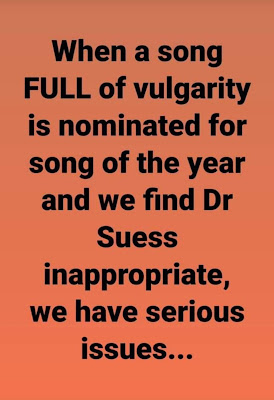 First, let me say that I’d have a lot more respect (like 3% instead of 0%) for their reverence for the author if they could manage to spell his freakin’ name right.

So, Mr. Meme Writer, you’re saying that all of popular music should be designed for the needs of pre-schoolers? Surely there can be different standards between rap songs and children’s books. There is with movies and TV shows. Yes, you say? Then what’s the problem?

Obviously, hardcore rap is for older kids and Dr. Seuss is not. End of controversy. And again, let me emphasize that the publishers pulled the (6) books, not public uproar. They merely had the sense to look at the offending pages with fresh eyes and go, “Yeah, this really doesn’t fly anymore.”

I think the subtext is probably important here because what this really is, is another swipe at rap from an aging white man. But to just come out and say that would be racist so they have to come at it another way.

And now, another of the Former Guy’s greatest hits, The Wall. 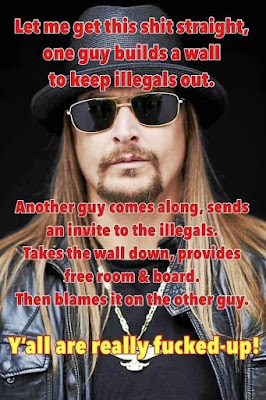 Right off the bad, if your meme features Kid Rock, I guarantee it’s wrong. It starts wrong and just gets wronger. Here’s the rundown:

·        The wall does not and cannot keep “illegals” out. It is incomplete and can be gone around, over, and under. It’s the least effective way to control illegal immigration, a vanity project, and total waste of tax dollars.

·        No one “sent an invite.” This is a seasonal surge, less, even, than the one last year. The only difference is a change in plans regarding unaccompanied children. That added to crowding, but the “another guy” has people working on getting the kids processed rather than just keeping them penned up indefinitely.

·        The wall has not been taken down. It was really never even there… just pieces, which are still in place.

·        The “free room and board” is a holding chamber. Granted, these accommodations would probably be an upgrade for the MAGA crowd but they’re trying to infer that they’re being put up at a Hilton.

·        There is plenty of blame to go around because this has been a problem for generations. But the Former Guy is the one who dismantled the whole processing apparatus without clear plans for what to do next. The idea (conceived by Messrs. Bannon and Miller), was to make it such a tragic clusterfuck that no one would even bother trying to come in anymore. All they succeeded in doing was making turning our country into a joke. We used to be an example for the rest of the world. We still are, except now it’s an example of what not to do. It’s an example of where kowtowing to white nationalism gets you.