The former guy got me good and pissed off again last week when he tried to play dumb about paying taxes on fringe benefits, like cars or housing for executives.

"They go after good, hard-working people for not paying taxes on a company car," Trump said.

"You didn't pay tax. Or education for your grandchildren. I don't even know. Do you have to? Does anybody know the answer to that stuff?"

I know the answer to some of that. My job involves managing a fleet of company cars that our employees use. My company has branches around the country, so district and regional managers are given company cars for business travel, which they can also drive for personal use.

According to the IRS, a company can “give” a car for an employee to use for business purposes, for free. BUT, any personal use is considered income and therefore taxable.

Our drivers have to report their business and personal mileage every month so we can calculate the value of their personal use, known as “taxable benefit.” It’s a major operation for which the drivers, the accountants, and I have to devote a significant amount of time to get it right, to remain within IRS compliance.

It would be really nice to just blow it all off but a reputable company can’t do that.

There are a couple of ways to look at TFG’s comments.

One possibility is that he knows damn well what the IRS laws are; he’s just used to flouting them like he does with every other aspect of his business. He’s just playing on the (probably correct) assumption that his fan club doesn’t know anything about tax laws on company cars.

But on the other hand, it wouldn’t surprise me either if he really doesn’t know anything about it. It’s certainly plausible that he has his accounting flunkies to work out all the details so he has never had to think about such things. No wonder he’s puzzled… He’s never had to get down in the details before. All he’s ever had to do is say, “Give that guy a car,” or summon one for himself. The details are for the little people to work out.

Speaking of details, let’s go to the debunker portion of this week’s post: 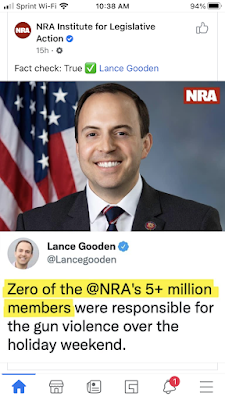 Sounds like solid self-defense at first, but there’s just one tiny detail they overlook: They don’t account for the effect the NRA has had over gun laws and culture all over the country. No one is blaming mass shootings on card-carrying NRA members, but you can’t ignore that through their efforts, gun laws are woefully insufficient to even make a dent in gun-related killings. Even the smallest, most logical efforts to safeguard innocent lives from being cut down are met with howls of Second Amendment hysteria. Like banning people on the Terrorist fucking Watch-List from buying guns, or fingerprint safety guards, or literally anything else that might save a life or make a weapon a bit less lethal.

We have to remember that the NRA exists as a lobbying arm for gun manufacturers. That’s it. Everything else is a side-mission, always secondary to selling more guns!

There is no amount of killing, whether it’s teen partygoers, concert attendees, or grade school children that will deter the NRA from enshrining the right to own any firearm imaginable as a basic human right. The cost in life is irrelevant. The only numbers that count are the monthly receipts. That is the legacy of the NRA.

I also have to laugh at the bar they’re setting, to reap congratulations for themselves. No members murdered anyone this weekend? Whoo Hoo! Hooray for us! Let’s celebrate with a little automatic weapons fire into the air! Our guys went a whole weekend without a murder spree!

My theory is that the weekend in question was over the Fourth of July, so their members were too busy blowing shit up to even bother getting out the guns.

Just don’t tell the NRA, or they might try to outlaw fireworks.

Oh, you are so good at this... Thing 45 displays a blatant disregard and incredible ignorance about so much it's difficult to discern what he's knowingly doing illegally, or intentionally doing illegally. But, the M.O. is pretty consistent that most of what he does is illegally, so it's rather a moot point since even ignorance of the Law is no excuse that holds up to breaking it. Since just about everyone around him has been or will be indicted, the company he keeps is telling, and he keeps his Circle so long as they're useful, so the most efficiently corrupt ones aren't under the Bus yet, but will be on any whim he might have that it's getting too close to him. So long as he's got people to sacrifice so he remains Teflon, and they're willing to offer themselves up as scapegoats and sacrificial disposable assets turns liabilities to him... he's got no incentive to do any different, it's worked for him since the 1970's thus far. As for the NRA, profits only matter of coarse and anyone who assumes otherwise is living in a Fool's Paradise. And those who assume the NRA cares about their Rights will continue to fund them, no matter what they do with the Money actually... because those same people can never have enough fire power, it's their Addiction.

Wow! That's a pretty impressive job and sounds super intense too. When I worked as a manager in the cable/telephony/Internet business way back in the day, (seriously a long time ago) I sometimes took company cars home, but I only had to report my total mileage used. Then I gave the car back to the person I borrowed it from(lol) Usually the tech fleet manager, and goodness knows what kind of paperwork they did once I gave it back. It was so long ago, I think the reporting was probably minimal. I have so many stories to tell.(lol) Hugs, RO

There shouldn't be much paperwork if the car isn't driven for personal use. They'd have to leave it at the office though, because the IRS considers mileage to and from the office to be "personal."

When he says things like "I'm and expert on tax law," or any other subject, what he really means is "I employ experts on tax law," and they use their expertise to skirt as much of it as possible.