I hope you’re having a great holiday weekend! The good old Fourth of Jue-Lie! That’s the day when social media pages are flush with “easy patriotism,” the kind of token symbolism that passes for true dedication to one’s country. I’m not impressed by sticking flag images everywhere. You want to be patriotic? Support the right to vote without barriers. Support the right to assemble in protest. Support the right chuck religious mythology and support peoples’ right expect scientifically sound solutions to real problems. Any yutz can wave a flag. Supporting democracy is a big ask.

That’s especially true when your team loses. Patriots don’t whine about phantom fraud that’s somehow responsible for their guy losing. Patriots pass the torch with class and double down on voter outreach the next time. Or maybe develop some ideas that garner wider support. Do something substantial, rather than merely trying to convince poor people that poorer people are to blame for their lot in life and rigging the game for the next election. Patriots accept blame for their own actions, they don’t point fingers at others who had no role in their downfall.

You know, if you’re going to storm a government building in hopes of interrupting the implementation of a free election, for Pete’s sake, just own it. Pointing fingers at Antifa or BLM, who had zero involvement with the whole ordeal, is as pathetic as it is embarrassing. No one believes you. Just accept that you’re an instrument of, or support insurrection. Don’t piss on my boot and tell me it’s raining. 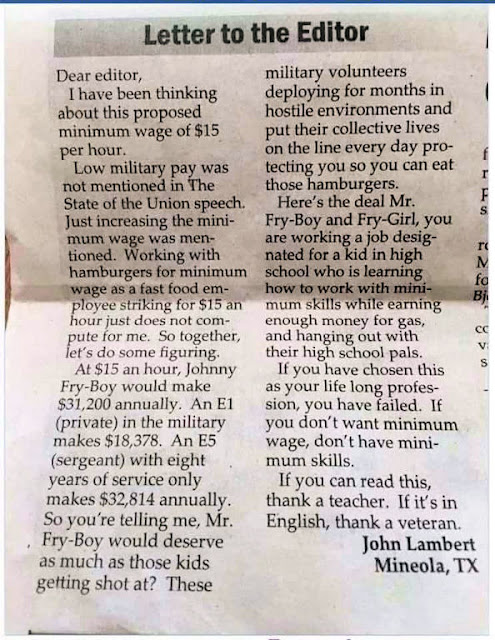 I know I’ve mentioned my thoughts on this issue before but seeing such misinformation appearing in print chaps my ass like wet blue jeans.

There are several points of contention regarding this line of thinking.

First, the entire thing is based on the misperception that burger-flippers are the primary (if not only) earners of minimum wage. They’re not, by a long shot, and that upends the very basis of this guy’s opinion. They love to call them “burger-flippers,” but often, the term “Essential” is more apt. You remember the heroes we were celebrating last year, those who risked their lives to put food on shelves or stock drug stores? I bet a significant number of them are working for minimum wage, especially once the “battle-pay” provisions elapsed. Where would we have been without them?

Sure, the military is essential, but how essential is child care when you have to go to work? Lots of child care professionals work for minimum wage.

Another point: Wages for the military and the rest of the public are not related, in that they come from different systems and employers. We can raise pay for military members without having any effect on private sector wages. Republicans can ask for a pay-raise for GIs anytime they want. All they’d have to do is cut back on spending with defense contractors, or maybe kill some of the weapons programs that military leaders say they don’t want or need. (But have to accept because said weapons are being built in an influential congressman’s state.) We spend more on the military than the next 12 countries combined. Don’t tell me there’s no room in the budget for better-paid troops. Lobby your congressmen for that and I’ll be right there with you. But don’t pretend what private employers are paying for minimum wage is a factor.

As I frequently point out, the right loves to target programs that help the lower and middle classes by pointing out that there’s some other more favorable group that’s being overlooked. But when they have the ability to do something about these “favored” groups themselves, it never happens. They’re only interested in military pay or homeless veterans when they’re trying to kill some other program. Otherwise, they don’t do a damned thing about it themselves.

In this case, they want military members paid more than service workers. But the solution should be to improve the pay of the military rather than to suppress the pay of everyone else. If they want to talk about earning gaps, how about figuring out why CEOs are billions of dollars more important than the people who defend this country. That’s the real disparity. It’s the zillionaires who are overpaid and overvalued. You want to sprinkle some dough around that comes from the CEO class? You could pay a hell of a lot of privates and sergeants from a 1% tax on the top 1% earners. Funny, I don’t hear any Republicans asking for that to happen. But they come out full force against “essential service” workers being able to make a living on a 40-hour week.

They can’t support this illusion in any factual way. That’s why they have to base their campaign strategies around preventing those particular people from voting.

Another point of contention is the lack of recognition that these minimum wage jobs are taken by choice. The author seems to think that it’s their fault for being roped into these low-paying jobs because they lack ambition or education.

But tell me, how are they supposed to get this education if they can barely get by on their wages? How can they possibly pay for school without going balls-deep in debt? The price of college has skyrocketed since I went to school.

I paid my way through college by working service jobs (grocery store, gas station attendant, record store clerk). The minimum wage was only 3-4 bucks an hour, but a semester at my state college was less than $1000. But now, it’s pretty much impossible to pay for one’s own degree just by working service jobs.

And I should mention that every single time the topic of raising the minimum wage was broached, the owner-class predicted price spikes and massive job losses, which never, EVER, came to pass when the wage was raised. The argument hasn’t changed since then and it’s still just as wrong.

Republican opposition to a higher minimum wage is 100% based on protecting profit margin. Business owners want wages low and production high. As was then and ever shall be. But that’s not a popular public argument, so they have to rely on stereotypes and distortions like the author above does. We just have to see it for what it is: a desperate attempt to keep the money in the upper class.

On the home front, we’ve had some excitement around these parts, as a family of robins made a nest in the holly bush right by our front door.  I’m sure they felt safe there because holly leaves are full of pickers that will tear you up when you try to handle them. 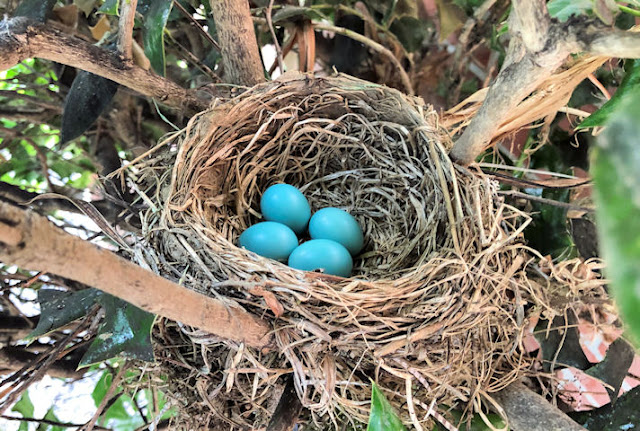 We’ve been monitoring the progress every day. Then when we came home from out of town last Tuesday, we found they’d hatched. Out of the four eggs, we could see at least 2 babies. So we got used to being yelled at by mama and papa robin anytime we dared use our own front door.

Sadly, our guests came to an unfortunate end.

Late Friday night, in the wee hours, the dog erupted in a barking fit. Sweetpea went out to see what the matter was, and found the dog on the couch, but staring at the front door. Not finding anything worrisome, we went back to bed.

But the next morning, she found that the babies were missing. They were nowhere near ready to leave on their own yet, so we figured that it was a cat or a fox the dog heard, having a midnight snack. Eventually, we found some, well, “parts” lying on the porch, which confirmed our fears.

The circle of life can be a real bitch sometimes.

And speaking of, I never understood all that stuff in the Lion King, with all the jungle animals celebrating the birth of a new creature that was predisposed to killing and eating them. If I was a zebra, I’d be like, “What are you all doing? Let’s stampede that thing out of here before another one of us gets killed! Remember? Last week they got Stan, and Bernie the week before! These things aren’t our friends!”

Maybe they just hung around because the songs were so snappy.

Email ThisBlogThis!Share to TwitterShare to FacebookShare to Pinterest
Labels: Bluz LIfe, Bluz on Film, Debunkery, Political Bluz, Republicans, Things That Piss Me Off