Two Steps Forward, One Step Back to the 1800s

As predicted, the COVID turnaround is turning back around again thanks to the Delta Variant and the dumbasses who reject the vaccine for partisan reasons. From what I’ve read, over 99% of new COVID cases are coming from unvaccinated people.

Of that lot, I’d guess there are, like, 5% who have legitimate medical reasons for vaccine avoidance. The rest are victims of MAGA politics, misinformation, and their own limited capacity for reason. You know, Freedom!

Or as Andrew Dice Clay used to say, “NObody tells me what to do, not even ME!”

Nope, freedom is just too important to let some pencil-necks at the CDC tell us red-blooded Americans to get a shot.

I say if they really want to be free, they should also ignore stop signs, one-way street signs, guard rails, smoke alarms, weight limits on elevators, and keeping one’s hand and feet inside the ride.

In red states, there’s a better than average chance that when they careen through an intersection, they’ll hit another like-minded citizen.

The GOP has never had a problem with causing suffering among others, given their stances against insurance, SNAP benefits, Welfare, unemployment payments, and so forth. Might as well get a taste for themselves, by eschewing the needle.

I’m sorry, but if someone willfully rejects the COVID vaccine and then contracts COVID, I have zero sympathies. None. Don't care. As far as I’m concerned, that’s a much-needed gene pool correction.

As a matter of fact, since the Republicans opened the door to weaponizing the Rona by withholding testing supplies from blue states back in the early days, maybe we should engineer some of the same for them.

We have to pick out spots though… killing off 25% of Republicans in a state like Alabama only means that the Dems will lose by 20 percentage points instead of 30. To be effective, we’d have to work in swing states. Like holding giant MAGA super-spreader events in central Pennsylvania, or rural Ohio. Let them have a nice rave-up with yelling and singing with religious fervor, while all mashed together massive cheek to jowl.

Don’t laugh; this may be our best hope of counteracting the spate of red-state voter suppression laws. We should get someone like Jim Carville on it right away. 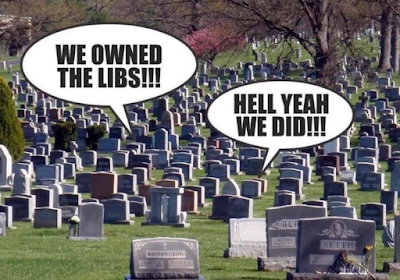 Now let’s run through some quick debunkery, shall we? 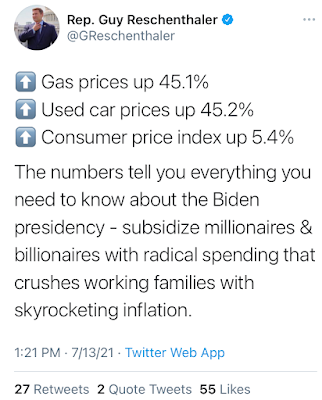 No, these numbers tell you nothing, other than people can use statistics to “prove” any point they want. Here’s why this attempt is bullshit:

Gas prices up 45.1%. I and many others have pointed this out before but the reason the percentage of gas price raising is high is mainly that they’re comparing it to a time when it was extremely low due to the lack of demand because of COVID. Nobody was traveling or vacationing, causing a glut of gas, causing a deeply discounted price.

People are getting out again with summer traveling which caused demand to rise, which caused prices to go back up. Plus there was that gas pipeline shut down a couple months ago, which hurt supply in the Mid-Atlantic and Northeast. It’s just simple free-market economics, which Republicans usually revere (unless they can use it to make a bogus argument to pin something on a Democratic president. Note that this president, nor any other, had an effect on what’s going on with the price of gas.)

Used car prices up 45.2%. Remember last week when I told you I manage a fleet of cars for my employer? It’s that experience I lean on to debunk this point. Used car prices are up because most auto manufacturers are shut down and have been most of this year. That’s due to an industry-wide microchip shortage. Modern cars have so many bells and whistles anymore that any day now, they will be taking your blood pressure. And all of them work because of microchips. So, without cars in production, new car stock flew off the lots at the onset of COVID recovery, putting used cars at a premium. It’s more supply and demand at work. And note again that no president had anything to do with the microchip shortage. Microchip-producing facilities were shut down due to COVID, plus one of the main manufacturing plants burned to the ground in a fire. This is another bad faith assertion, the argumentative equivalent of throwing mud at the wall just to see what sticks.

Consumer Price Index up 5.4%. I’m no economist or anything but it seems to me that this is very similar to the gas situation. Prices were down last year (aside from groceries) because no one was going anywhere or shopping for anything but essentials. When prices are way down due to an event, the prices returning to where they were will always look like a big price increase percentage-wise. But it’s just the market correcting itself. It’s not proof of some kind of vast political price-gouging campaign.

The numbers tell you everything you need to know about a Biden presidency… Subsidize millionaires and billionaires with radical spending that crushes working families with skyrocketing inflation. Seriously? Democrats are subsidizing the rich? Bitch, please. Subsidizing the 1% is basically the GOP’s platform, it’s their Prime Directive. Why else did they pass a huge tax cut for them and scraps for us? Why else did they just cut tax law enforcement from the bipartisan infrastructure deal? Why else clamor for cutting regulations that keep businesses from poisoning the earth or killing their employees?

Biden is the first president in a long time who’s going to bat for the middle and lower classes. The infrastructure bill is going to help them immensely, but at a cost to big business. That’s the poison pill for Republicans, one they’ll never willingly swallow.

But they can’t admit that, so they make up tweets to point the finger at their opponents, accusing them of doing the very thing they do themselves. 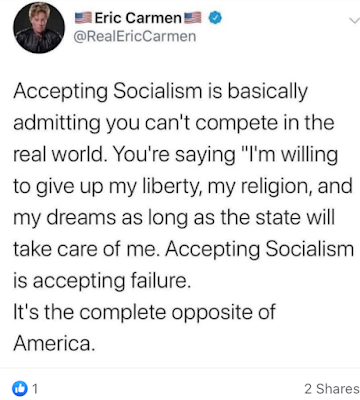 I had to look this one up to see if this was Eric Carmen the former pop star, or just someone similarly named. It appears it’s the former, but I can’t tell for sure because his Twitter account is gone. But this excerpt has been circling around of late and it’s too dumb not to address. It reads like it was written by Eric Cartman.

The thing is that there’s really nothing true in the whole message. Nothing. There are too many successful socialist countries to pretend that they’re all some kind of futuristic dystopia. Do people have to give up their religion in Canada? Do the Danes have no liberty? Do the Australians have no dreams?

Of course they do, and they also get health care without having to go into bankruptcy. Do they all lay around all day watching TV? Of course not. They still have jobs to go to, most of which pay a living wage.

This is just another case of the very rich trying to keep the applecart upright so that they can remain the very rich, at the expense of everyone else.

Eric Carmen should go back to being all by himself. 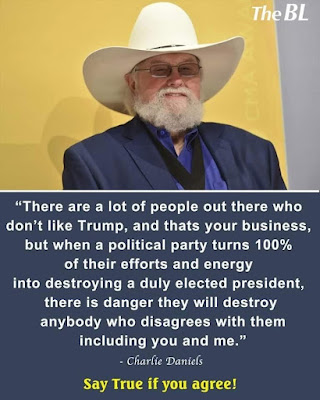 Charlie Daniels has apparently spent so much time trying to be the Country version of Ted Nugent that he died of a stroke last summer. And apparently, he forgot all about the years between 2009 and 2016, because no one did more to discredit, distort and obstruct a president than his very own GOP. “Our number one goal is to make him a one-term president.” Remember that?

And who was it that stormed the Capitol building in a vain attempt to overturn a legitimate election by force, killing Senators, Representatives and the Vice President if they could? (Killing and injuring police officers in the process.) Gee, that was a conservative mob, not a bunch of liberal snowflakes, wasn’t it.

So STFU about who’s “destroying” who.

You know… in retrospect. I’m pretty sure he’s not doing much punditing any longer. Going from a pot-smoking long-hair in “Uneasy Rider” to Corn-Pone Scott Baio is enough to give anyone a stroke.