It's the Stupid, Economy

OK, let’s hop back into Debunkery mode, shall we? Because the disinformation campaign never sleeps. 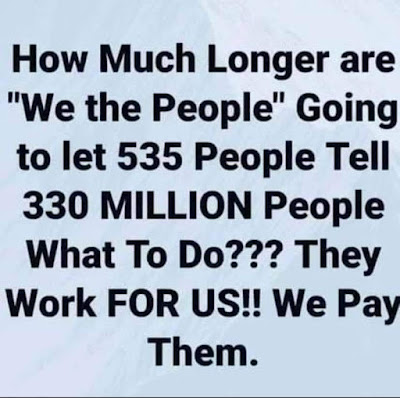 There are two distinct points that make this bit of wishful thinking worthless.

First of all, the writer must never have received even a basic education in how government works. They fail to realize that the very basis of our Constitution is a representative government. We elect people and they represent our interests. (OK, in theory.) That’s how Congress works. We cannot have a government run by 330 million people. This brings us to the second immovable object:

330 million people won’t agree on anything. Ever. That’s why we have representatives in the first place. Representation is sliced and diced to cover very local interests, as in the House of Representatives, and State-wide interests in the Senate. We vote for a President to represent national interests.

So by definition, there will always be someone who disagrees with whatever is going on.

Yes, we pay them to do it (again, in theory, if “we” means the rich donor class.”) It’s up to us, the voters, to keep our reps honest and if they’re not doing what we want, or if they’re only answering to the moneyed interests, vote them out. Just keep in mind that one side wants one thing and another side wants something else. Just because someone isn’t getting what they want doesn’t mean the system doesn’t work.

If there’s a downfall to the whole program, it’s that the Big Money Donors spend their big money trying to convince people that what the donors want is good for everyone, regardless of whether it’s actually true. (Example: Tax cuts for us? That will trickle down eventually. Direct help for you? That’s Socialism!)

Or if unable to convince people to vote directly against their own best interest, distract their attention with other incendiary topics to keep their attention away from the degree to which they’re getting screwed. And speaking of, there’s this: 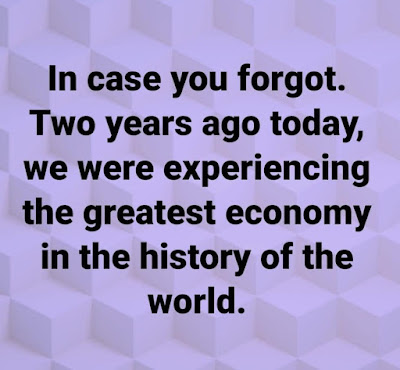 This is just completely and verifiably false. It’s an out-and-out lie that counts on the target audience desperately wanting to believe it and also not knowing any better. They seem to forget that many others of us were alive and conscious in 2019 and remember how totally Not Great the economy really was.

Two years ago wasn’t even the best economy of the decade. You have to remember that the stock market alone does not represent the whole economy. It’s just the part that’s important to the rich people so they can keep socking away dividends.

In 2019, unemployment was fairly low because people needed multiple jobs just to stay afloat. Stagnant wages are not an indicator of a thriving economy (except to business owners). Big businesses were flush with cash because of the massive tax cuts granted them by the Republican Congress in 2017, tax cuts that were never paid for and never resulted in any measurable rise in jobs or wages. The companies just pocketed the money or bought back their own stock.

The only way to grow an economy is to water the grass. Put money in the hands of people who will spend it on goods and services. When the merchants see the increase in business, they put on more staff. When more and more places are doing well, the pay goes up, and the cycle continues.

They’ve tried the top-down method at various times in recent history, with Reagan, with Bush the Sequel, and again with the former guy. Each time, the economy did NOT roar to life, but times got significantly worse. Because in each instance, the rich took the money and kept it. The only trickling down is when they piss themselves laughing at the rest of us, especially at the poor working slobs who voted their guys into office because they were afraid of whatever boogeyman they were sold during the campaigns.

And aside from that, the gross mishandling of the coronavirus pandemic in 2020 snuffed out any forward momentum the economy might have had. 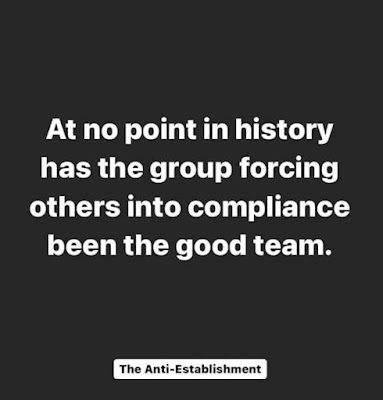 ·        Eliminating polio, smallpox, measles, and every other disease we wiped out because everyone had to get vaccinated

·        Segregating schools in Alabama and elsewhere

·        Bringing down road deaths by mandating seatbelt use or motorcycle helmets

All of these things were forced on a segment of the population that resisted, like racists, homophobes, rich business owners, bikers, and kids who hated needles. In each case the forcers were the “good team” and the others were not. The greater good was served and there was no evil power play or nefarious plot to reduce our “freedom.” It made the country safer and fairer to everyone.

And yes, when some people already have the odds stacked in their favor, the last thing they want to see is a fair playing field. 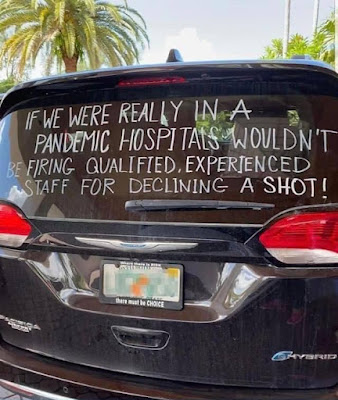 Here’s another one that completely misses the point.

It’s because there IS a pandemic that a hospital has the need to ensure their staff is ready and able to assist for the long term and not lose staff to death or disability. Not to mention make is less likely to have people actively spreading the disease they’re all trying to fight. As far as I’m concerned, anyone who’s in the medical profession and resists such a well-tested and proven vaccine should seek other work because they lack the basic ability to do no harm.

And in America, there’s also this thing called “Liability.” Such a facility could go broke paying the damages to people who were infected because they allowed unvaccinated or unmasked people to mix with staff and patients.

My dad loved to mess with people. It was always something harmless, mostly just mind games. I learned at the foot of the master. These are a couple of quick stories from our time in the Columbus OH suburbs. (Source post: $#*! My Dad Did.)

One of the first stories I remember about Dad messing with people was when I was in early Jr. High.  We lived in a cookie-cutter suburban neighborhood and some of the neighbors were known for being a little fussy.  At one get-together early in our tenure there, one of the neighbor ladies was talking about how she heard that another neighbor wanted all of his underwear labeled by day, so it would wear out evenly.

Dad said, “Don’t laugh… I have labels put in my underwear too…” He paused before delivering the punch line…  “January, February, March…”

They gave us a wide berth, after that.

We got along really well with our next-door neighbors though.  They were some nice, down-to-earth West Virginians.  Dad once complained to him about his own abysmal golf game.  (Dad was never much of a golfer.)

“I don’t know why I even have clubs anymore, for all the good they do me,” he said.

Later that spring, the neighbor was out in his back yard and happened to look over at our garden, which was right alongside our chain-link border fence.  Dad had his tomato plants staked to his golf clubs.

The neighbor thought that was the funniest thing ever.  “Why in the world are you using golf clubs?” he asked.

For the rest of the summer, whenever the neighbors had guests, he’d drag them out to the back fence to show them his crazy neighbor’s garden.