No, this isn’t a post about the political situation in Texas, it’s about last weekend when I found myself traveling there for a wedding.

One of my oldest friend’s daughter, Kyrie, was getting married. I’ve been her “uncle” all her life. I’ve written about her or for her so many times before, I call her my Muse. The Elf and the Leprechaun,  Letter to a 16-year old Girl, Letter to an Incoming College Freshman, The Pros and Cons of the 80’s, and the time she took me on a tour of her college town, which was MY old college town.

She currently lives in Houston, teaching 3rd grade. Her wedding site was going to be right between 3 cities, Houston, Austin, and San Antonio. After consulting Google Maps, Austin seemed to be the closest so I decided to fly in and out of there.

Um, no. Not doing that. The next best option was an 11:50 AM flight that routed through Houston for a 3-hour layover. Not the best, but the other choices were worse.

My buddy, known here as The CFO (Chairman of Fuck-Off, which is the title I’d give him if I ever won the lottery and needed dedicated staff to handle all the donation requests and business “opportunities”) was going to be my personal Uber driver.

Our first stop, after grabbing lunch, was to visit the statue of Stevie Ray Vaughan, which we easily found along the river. 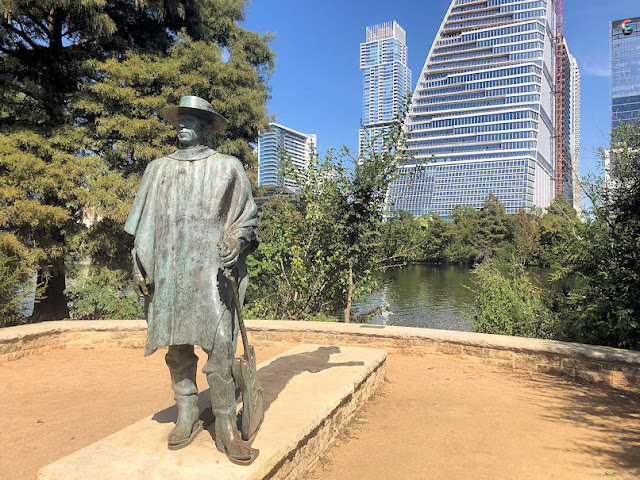 A monument to the greatest guitar player I ever heard.

On the way into town where the wedding venue was, we passed a sign that I just had to document. I had no idea I’d be anywhere near this place. 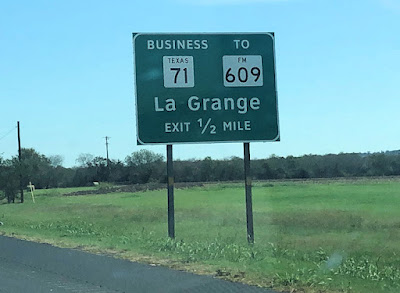 My immediate thought went like this: “Oh I gotta send that to Dad, he’s gonna love… ah crap.”

He would have loved it, had he still been with us. I’m still getting used to him not being here. It’s a process. But I always thought the ZZ Top song “LaGrange” was responsible for turning him from “Turn that shit down,” to “Hey, turn that up!” That Texas boogie just goes right to your groove center.

Now, I’m not going to go into all the wedding bullshit. I mean, no one wants to hear about a lot of wedding stuff for people they don’t know. Suffice to say, it was a beautiful event, the bride was stunning, and I definitely had to swallow hard a couple times.

I’m just going to talk about a couple of things.

First, a deer showed up at the rehearsal dinner. I know we were in a rustic environment but who expects a little deer to amble over to mix with the crowd? 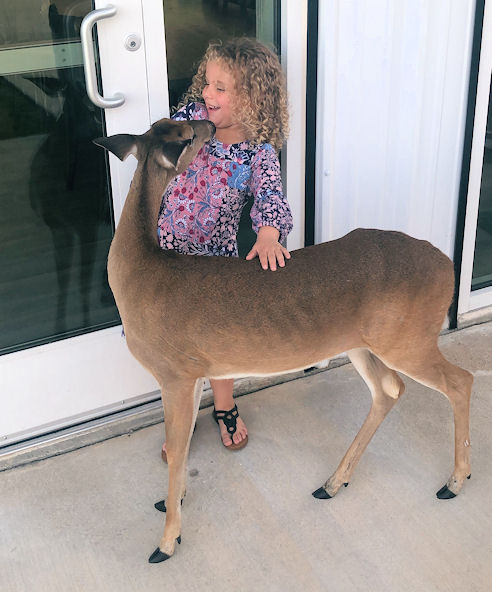 Bambi with the bride’s niece. 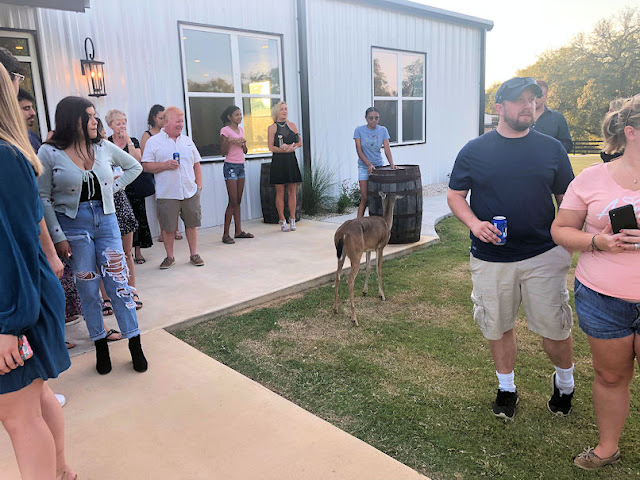 It was unreal… you could walk up to it and it would just look you over, smell your hand and sometimes rub its head on your leg. A few times it reared up on its hind legs, but the grownups learned they could just put a hand on its neck or chest and it would stay right there.

Eventually, they tried to get the rehearsal in, but the deer wouldn’t leave. 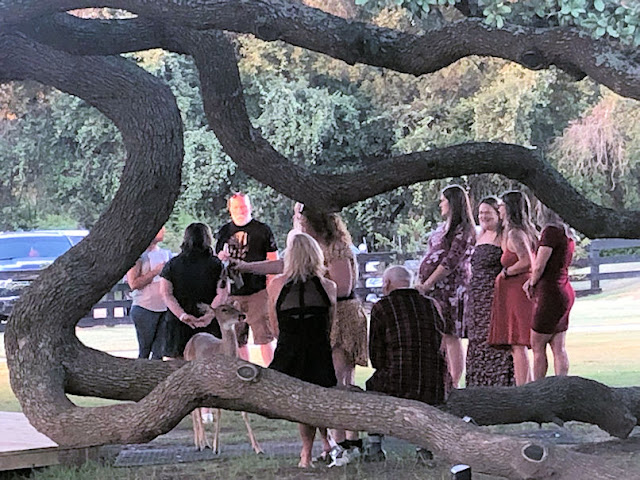 I think we should have called him John. Deer John. Or, John Deere. Whatever.

The ceremony was to be under that amazing tree. Note the deer, making himself at home. Obviously, it was used to interacting with people, probably mistaking us for oddly-colored, misshapen deer.

Eventually, one of the facilities people managed to run it off. Or kidnap it to release later. I’m not sure which.

The wedding wasn’t until 4:30 on Saturday, so the CFO and I had some chores to do that morning. The bride wanted a thing at the reception where they had a bunch of mini Polaroid cameras for the guests to use. The idea was to take random pics, caption them on the bottom, and then pin them to a bulletin board. She had four wine corks with push pins stuck in them so they looked like plastic porcupines. But the base of the push-pins took up too much room on the small photos, so she sent her Dad out to find hatpins to redo the corks. So the job fell to the CFO and me to repopulate the corks with the hat pins.

We started with great enthusiasm, which waned as the minutes dragged on. So this was the “finished product” we later presented to the bride. 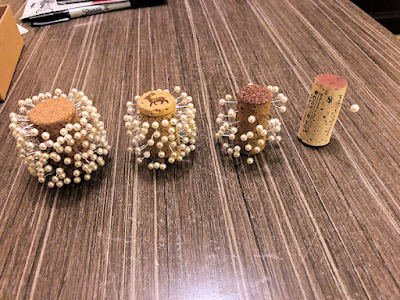 She should have known better than to give the two old dudes a crafting project.

The main task of the afternoon was to construct The CFO’s father-of-the-bride speech. He had a couple of key ideas and stories he wanted to get out so with my background in radio broadcasting and public speaking (in my college days), it was up to me to mold it into something resembling a coherent speech.

We spent about three hours in my hotel room working on wording, delivery, and getting the notes down on cards. Our stated goal was to make life miserable for whoever’s speech followed. I made him do run-through after run-through, and we’d tweak wording or emphasis, or add a gesture. We had a lot to figure out regarding how he was going to do some of the “stunts.” It was grueling and at one point he probably wanted to take my head off. But then, deep down he knew I was right, so to his credit, he kept plugging.

As it turned out, his was the opening speech.

Here are a couple of the better bits:

·        [CFO takes out giant stack of note cards] I had some remarks prepared but the Kyrie told me I couldn’t talk about her dating history. [Tosses giant chunk of the note cards down on the table.]

·        I want to offer congratulations to my incredible, talented, beautiful daughter and… um… uh… uh… [from a plant in crowd: “Dom!”] Yeah, thanks.

·        The first time they met, it was in Put-In-Bay. Dom was puking into a bottle… and my incredible, talented, beautiful daughter said, “Someday I’m gonna marry that…”

·        Now, for the primary stunt. The CFO spoke about how it had always been his own job to protect his little girl, but now it’s falling to the groom. Then came the big moment.

“But remember, I know some very dangerous people. [Three red dots appear on the groom’s chest.]

All of whom have a “particular set of skills.” [Two more red dots appear on the groom.]

Some of whom are here tonight. [Three more dots light up the groom, who now has eight “sniper targets” on him, which were, in fact, laser pointers handed out by The CFO to select guests.]

But I’m sure it won’t come to this.” [Dots gradually disappear.]

·        Kyrie told me I had to say something nice about the groom. I couldn’t come up with anything, so she made me a few suggestions. [takes new set of cards from jacket pocket]  Let’s see… Nope…. No… No… Uh-uh… {tossing each card over shoulder] Nope… Hell no… Oh here’s one. He’s got a nice beard. [Back to cards] Nope, Nope, [giggling] uhh, no. [Reads card closely, leans over to bride] I am NOT saying THAT. OK, he’s going to inherit a killer Mustang someday.

·        Then in closing, he actually said something nice (at my insistence) and welcome the very good-natured groom to the family.

My friend, this speech killed. They would have carried him off on their shoulders if he wasn’t so busy picking up all the cards he tossed. And I was standing right beside the Best Man, who had to go on next and was NOT happy about it. Mission accomplished.

Sunday was getaway day, which I expected to be a breeze. With the three-hour layover in Houston, I planned to stream the first half of the Steelers game before hopping on the flight home. Such a fool I was.

After the CFO dropped me off at the Austin airport, the first thing I did was check the big board. Lo and behold… my freakin’ flight to Houston was canceled. I looked toward the Southwest Airlines desks and the line was massive. (Mine wasn’t the only canceled flight.) I knew that if I got in line then, it would be hours before I even got to talk to someone, and all the better alternatives would already be taken.

I checked the Southwest app to try to rebook, but all remaining flights for the day were listed as “unavailable.” So were all the flights for the next day too. Talk about playing "Texas Hold'em. So I was well and truly fucked.

Until… I remembered that the CFO was on his way to Houston at that very moment, heading back to his daughter’s apartment. So I made a quick call to see if he could come back and get me to bring me along. Luckily, he wasn’t too far away yet. He was back about 15 minutes later.

Long story short, he got me to the airport about 40 minutes before I had to board my original second leg back to Baltimore. Eventually, I learned that Southwest had a massive amount of cancelations over the weekend. Many people were stuck for days, as I would have been, had I not had two unreal pieces of good fortune: my buddy already heading to Houston and having a 3-hour layover that gave me enough time to call an audible via automobile. I got home at the time I was originally scheduled, unlike so many other poor slobs this weekend.

What I wondered is why I hadn’t heard about the cancelation before I walked into the airport. I mean, I have the FlightAware app… why didn’t it tell me? I checked the phone popups and didn’t see one. But then I scrolled down some more and there it was. It had come in around midnight the night before. And I didn’t have email notifications activated, so by the time I got up and looked at the phone, the flight notification was pushed down, out of sight.

If I’d have known about the cancelation earlier, we could have skipped the trip to Austin and just moseyed down to Houston at our leisure. Oh well. I got off light… I can’t complain.

That Deer at the Wedding is hilarious! Makes it all the more Memorable in a most unexpected way! The Old Dudes Crafting Project was even more hilarious! LMAOROTF. Well, at least going to Texas was Memorable in the best of ways, I don't know I'd want to venture to some States right about now with their Political Statements being so Far Side... of coarse, here in Arizona we got our own Issues Politically... so... not like we're living The Dream out here in the Wild, Wild West Politically either. Our Democracy is in Peril.

I made a conscious effort to avoid talking about anything resembling politics while I was there. I wasn't going to be that "Uncle who ruined the wedding day."