It’s funny when memes start to repeat themselves. I just saw this one turn up last week: 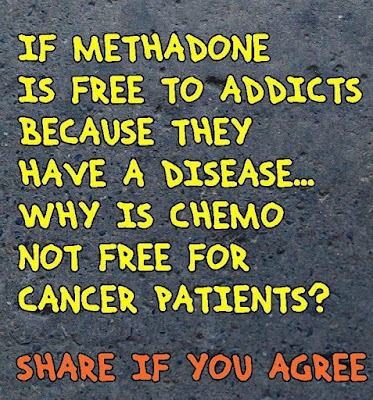 I can almost just cut and paste my previous debunkery of the meme which similarly complained that the COVID shots were free so why aren’t they giving away insulin and chemo?

The answer to that was:

1)      They don’t give away chemo and insulin because this is a capitalist nation and medical care is run for a profit. That’s the way conservatives want it. You can tell because every time a Democrat tries to help lower the cost of medical care or insurance the Republicans kibosh it by screaming about socialism. Do you want low-cost medical care? Vote out Republicans. (Which they won’t do, because that would be an admission that they’re wrong.)

For this particular meme, the “contagious” point falls away, but I’d also add that there’s no other way for the makers of methadone to make money. Do you think the heroin addicts have cash to spend on methadone?

No, the only way to make money is for the drugmaker to sell it to the government, to provide to the addicts. And as long as we run a for-profit medical industry, the drug companies will need to be paid. Do you want to change that? Support Democrats in favor of a Single-Payer medical system, like the ones run by every other developed country in the world. 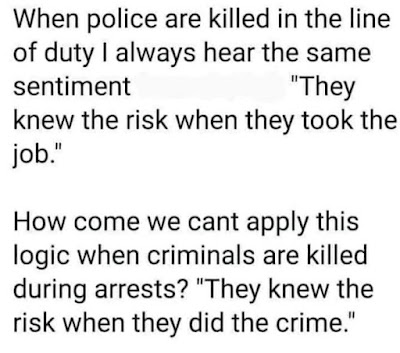 That’s the society we want? Street-side police executions for any or all lawbreakers? That’s life in a Communist dictatorship, not America. At least it’s not supposed to be. We’re on our way, led by people who support memes like this.

Look, when a possible criminal resists arrest with lethal force… pointing a gun or wielding a knife, I say they get what’s coming to them. If they’re dumb enough to draw on an officer, they get what they deserve. But those aren’t the cases that people hold marches about.

People protest over the killing of handcuffed detainees, or people just sitting in their cars. They march over people being killed over minor offenses like traffic violations, selling single smokes, passing a bad twenty, or just having a bad attitude. They protest when police become judge, jury, and executioner.

So when the knee-jerk police apologists want to put their idols on an unimpeachable pedestal, just remember that the original police report said he died after a “medical incident.” From the police report:

“The officers were able to get the suspect into handcuffs and noted he appeared to be suffering medical distress. Officers called for an ambulance. He was transported to Hennepin County Medical Center by ambulance where he died a short time later.”

This was the official record, up until the video came out. They obviously forgot to add that the “medical distress” was caused by their officer’s knee on his neck for 9 minutes. And this is just one example. I just wonder how many other travesties occurred in the shadows, without the illumination of video.

That’s why we can’t apply this dumbass logic. 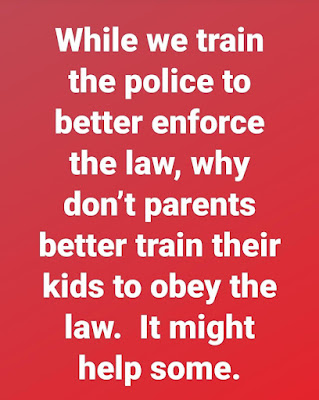 This goes hand in hand with the other one but I’m going to take it in another direction.

So, there are a great many kids who don’t have the benefit of having even one stable, caring, knowledgeable parent, let alone two, to advise them on the finer points of police interactions. So maybe it’s not a bad thing for the police to bear the greater burden of behaving better than kids who literally don’t know any better.

There are a lot of factors at play here, poverty, education, subpar housing, and lead paint. It’s easy to sit on one’s big, suburban, well-fed White ass and opine about the raising of children in a world they’ll never see, let alone understand.

Another story from my dad, who passed away last month. He was always a big proponent of donating blood. He was always proud of my brother and me for carrying on with blood donations when we were kids and ever after. When I blogged about some of my past blood donations, he added a story of his own, in Comments.

The first time I gave blood was at Duquesne University when I was in my junior year. My Principles of Statistics professor was sick in Mercy Hospital and a call went out for blood donors. My frat brothers all passed on it, but I was not comfortable in that class and felt a duty. So I went down to the hospital and gave a pint.

Later that semester my professor called me in and was thankful, and said no matter how bad I did on the final, I was going to get a C at the worst. YES there is a God!

Follow-up at the final exam, fellow frat brothers were sweating, and I mean sweating. I got up and left about 30 minutes into the 2-hour exam. My blue book was blank, except for a note reminding him of our deal. I think I could have passed it, but I had other exams the same day. Great memories of a blood-giving experience some 50 years ago. Dad