"Kyle, I Will Kick You in the Nuuuttts!"

There’s already been a ton of ink (virtual and otherwise) used on the Kyle Rittenhouse case, which now seems to be barreling toward the finish line of acquittal. The Judge isn’t even pretending to appear impartial.

For all the talk about all the angles of the case, I just can’t get past this one single principle: You shouldn’t be able to go out aggressively looking for a fight and then claim self-defense. If someone is worried about suffering bodily harm, their first obligation is not to show up and fan the flames in places where bodily harm may become imminent.

The kid had no legitimate reason to be there; no connection to the area and no dog in the fight other than the general worship of law enforcement. He traveled there specifically for a chance to use a gun on someone. There’s no other storyline that passes the smell test.

I see it a lot like the Trayvon Martin case. One should not be able to chase someone down on the street, start a confrontation, and then use lethal force and claim self-defense. That’s really an execution.

And Florida made it a state-sanctioned execution. I fear that two more are going to be sanctioned in Wisconsin this week.

And that’s all I have to say about that. Like I said, it’s already been pretty well chewed over. That’s my two cents and I’m out.

I was talking with friends a while back and the subject of the “best beer we ever had” came up.

I didn’t even have to think twice about mine.  And the funny thing is; I don’t even know what kind of beer it was.  That wasn’t as important as the circumstances.

This was back when we were living in the farmland outside Toledo, Ohio.  We didn’t have a huge parcel of land… it was an acre and a third… but it would have been an awful lot to mow by hand, so we had a lawn tractor.

Coming from the suburbs, I thought that was the coolest thing ever, especially because as the oldest son, I was about to inherit primary ownership of the family grass-cutting chores.  I still had to use a regular lawnmower to “trim,” because the tractor couldn’t really get into all the nooks and crannies around our several out-buildings (a garage, two sheds, and our Barn).  But it was far better than doing the whole thing by hand. 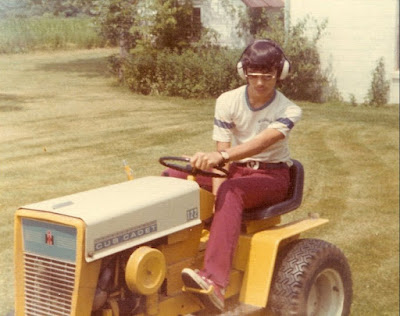 Me, earning my keep, the first summer we lived in NW Ohio.  I was about 14, wearing a shirt from my old junior high in Columbus.  (As well as hideous red pants, but that’s another story.)

It was fun at first, but the novelty quickly wore off, especially during the dog days of summer.  Cutting the grass was a long, dusty, sweaty, allergy-provoking endeavor that was most definitely not fun.  But it was my job, so I did what I had to do.

One day, when I was around 16, I was just finishing up cutting the backyard, on a hot, muggy, dusty summer afternoon.  After I finished up one last strip over by The Barn, I came cutting back across the yard to head over to do the other side of the garage, when I saw him.

It was my dad, standing out in the yard along my intended path, with his arm outstretched.  As I drew closer, I could see he had a beer in his hand, holding it out the way the people hold out cups of water to people running a long-distance race.

Now, I’d grown up on sips of everything, from beer to whiskey, to gin and tonics, to martinis, or a small glass of wine with dinner on holidays and birthdays.  But I’d never been given a beer of my own.  Until now.

I pulled up beside Dad, accepted the beer, and took a long pull on it.  It was absolutely perfect, and exactly what I needed right then.  I think I asked to confirm that I could have the whole thing.

Like I said, I don’t know what kind it was; probably something standard… a Bud or a Miller Lite.  Maybe it was a Hamms, which Dad used to bring back from his business trips to Chicago.  But it didn’t matter because it was cold, it was beer, and my dad gave it to me.  It was one of those father-son moments you don’t forget.

I continued on to finish up the side-yard, beer in hand, feeling much more mature than my 16 years.  In fact, I felt like a million bucks.  Not only did Dad trust me with a loud, powerful spinning-bladed death machine, he trusted me to drink a beer and not do anything stupid.  I know it sounds risky in retrospect, but even then, I never copped a buzz from a single beer.

But it set the stage for future such moments.  No, they weren’t always hand-delivered out in the yard, but I knew that when I came in from a long day’s lawn mowing, there would be a cold beer in store for me, and before long, maybe a gin and tonic instead.

You know, this would have made a really good beer commercial.  Too bad about that pesky “drinking age” thing.  The kids of today are missing out…

I love this! We are too hung up on silly things. One beer at 16 does not make an alcoholic. I grew up having sips of it all. I thought it was all awful, including beer. My parents always let me taste and I would make a face. My moms' slow gin fizz appealed to me just because it was pink and had a cherry. I tasted it and spit it out. I laugh at that now. I still would!
My parents spanked me, allowed me a sip, allowed me to stay out until the street lights came on, I could drive the lawn mower, but not the car, and I could play outside with no supervision and most days mom would tell us to go outside and get lost until dinner time. Which today none of that would happen. I have realized at this age that my upbringing was pretty great and I am thankful I did not have internet, social media and helicopter parents. BUT my boyfriend had those red pants bluzdude! :-)

We always got sips as well, plus a little glass of wine for Easter dinner or similar occasions. As a little kid, I always tried very hard not to "make the face," lest I be denied more sips in the future.

It sounds like we had similar childhoods. We were basically turned loose on summer mornings and showed up back at home for lunch and dinner. There were no tabs kept, but we had the knowledge that our freedom was linked to us not causing any trouble. As a result, my parents raise three self-reliant children.

Oh God, those 70s fashions... I can't believe they let me out of the house wearing stuff like that. Maybe they were hoping I'd get motor oil on them or something, so I'd have to take them out of rotation.

It was obvious that kr went looking for trouble. I totally agree with your assessment.
Nice first beer story with red pants.

It's no different than if he'd brought that weapon to a school. He meant to use it.