Make Them Wear Their Votes

The passage of the Biden Infrastructure bill got me thinking a couple of things.

First of all, Whoo Hoo! And it’s about damned time they passed a bill that helps people (who aren’t already filthy rich).

It also made me think about the campaigns for the 2022 elections. It’s been widely predicted that the Democrats will get their asses handed to them in the midterms. But it shouldn’t have to be that way if they campaign correctly. I think they need to hang all those Republican “No” votes around their necks like anchors.

The Democrats who supported this bill (and maybe other bills too, if someone can kidnap Manchin and Sinema for a few weeks), should be out there highlighting what it’s going to do for the voting public and making their opponents explain why they voted “no” or supported the “no” votes.

They need to make their opponents explain how passing the Trump Tax Cut bill without a thought to the deficit or the economy was proper yet supporting this bill was not. And if they try to talk about how it was supposed to stimulate the economy, explain that the “trickle-down” programs have never worked as advertised. They didn’t work when Reagan did it, didn’t work under W Bush, and they most certainly didn’t work with the former guy.

And also make them explain why, if they really were concerned about the middle class, why the middle-class tax cuts were sunsetted after seven-year, but the tax breaks for the 1% were permanent?

If I were a candidate, I’d hammer this stuff every single day. It doesn’t even matter who the particular opponent is; just talk about what the Republicans have done in the last 40 years and hang it around their necks. If that’s their team, they have to bear the consequences.

Take every extreme Republican policy, no matter where, and explain that this is what their team wants.

·        To allow the spread of disease by downplaying or eliminating common-sense steps to fight it, the same kinds of steps this country took to eliminate polio, smallpox, and the other formerly widespread infectious diseases.

·        To suppress voting until the only non-suppressed voting groups are their own. They want to take away YOUR vote!

·        The donor class to pay nothing in taxes and have no limitations on what they can do to make more money, usually at YOUR expense.

·        To ignore the obvious, right-there-in-your-face effects of climate change, so the afore-mentioned 1% can continue with their current profit margin. (Up until their facilities are underwater, I suppose.)

·        To allow our roads and bridges to crumble under our feet and tires. All those “no” votes on Infrastructure were because Republican donors did not want to pay for any of it and that’s how they instructed the congresspeople they paid for to vote. As far as I’m concerned, they don’t get any say over how tax dollars are used because they contribute so little to the fund in the first place.

·        To keep all wages, not just minimum wage, suppressed. Payroll costs money. Until they can automate their entire production process, they want to pay as little in salary as they possibly can. Whether their employees can make a decent living does not factor into the equation.

Republicans consistently vote against every one of these items when they’ve been proposed, or more often, prevented from even coming up for a vote. Mitch McConnell has killed more popular bills in committee than most Congressmen have ever proposed. 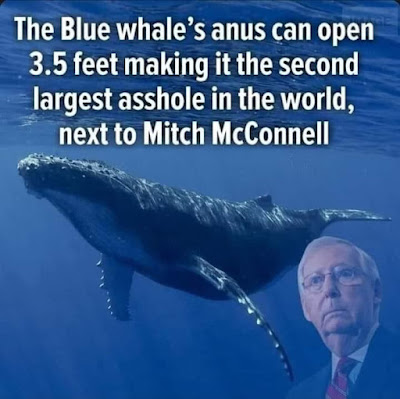 I’m becoming alarmed that Joe Manchin and Kyrsten Sinema are going to become “Democratic Mitches.” McConnell is incapable of being publically shamed because he has none. He has no reason to care about his image or national popularity and he just got re-elected in a runaway. He only has his donors to please like those of Manchin and Sinema, who don’t care about anything more than not paying for social or environmental programs. Hence the constant focus on how much the bill costs rather than what it can do.

We need to get to a place where those two votes aren’t the lynchpin of popular, widely beneficial bills. Granted, the odds are that the 1% may buy themselves some new senators, but we’ll have to blow up that bridge when we come to it.

Shortly after the Big Tennis Game, (I mentioned in last week’s post, wherein my little 5’9” Dad and a neighbor lady kicked the crap out of their big, blond, athletic neighbors in a tennis match,) relations between the houses started to deteriorate.

First off, my golden retriever came up missing. After a thorough search, we called the pound and yup, there she was.  We then learned that our neighbors, the Blonds, called in a complaint on her, because they said she knocked down one of their kids.

Now, anyone that knows golden retrievers knows that they’re harmless and are rarely aggressive.  Obviously, my dog was much bigger than the little kid so I can see how she got knocked down.  And if it did happen, I’m sure it was only to lick the crud off her face. But wouldn’t a phone call to us be a better choice than having the freakin’ dog catcher come pick her up?  They knew whose dog it was.  Still, we didn’t say anything right then.

Later that week, Dad was out in the backyard and heard the Blond kids calling the dog over into their yard.  That’s when Dad went ballistic.  They’re calling the pound when their fucking kids are calling the dog over???  He called up Mr. Blond and reamed him a new one, right through his designer tracksuit. I sat there and listened to the whole thing and man, it was brutal.

We didn’t have much to do with them after that.  From then on, Dad took every opportunity to screw with his head.

Most of the opportunities came because of the way our properties were laid out.  Like I said, our barn ran lengthwise between our houses.  And we had about 3 or 4 feet of property on the other side of the barn.  Basically, it was turf that we never really saw but was right there for them to see every day. 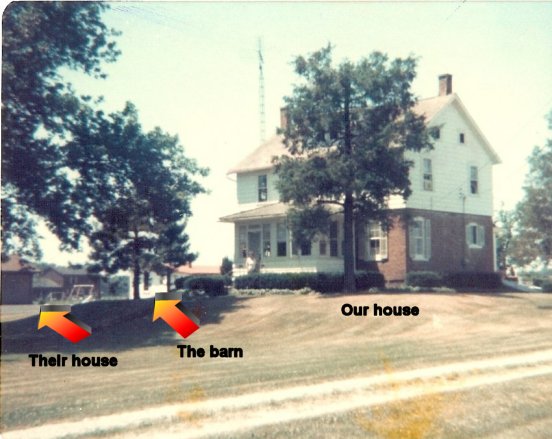 First, there were the lawn cutting wars.  As you might imagine, the Blonds were pretty fussy about their lawn.  So Dad would time it so that he cut his grass 2 or 3 days after the Blonds did so that ours would look more manicured.  Invariably, Mr. Blond would come out afterward and re-cut the parts that bordered ours, so as not to look bad in comparison.

Then Dad stopped cutting the strip on the other side of the barn entirely.  Eventually Mr. Blond ended up cutting it too.  It was probably a better deal for him anyway because, unlike my dad, HE wouldn’t blow the grass clippings into his garden.

My favorite story is this, and I really have no idea what even started it.

Dad took a tape measure out to the other side of the barn one day, (again, out of sight from our house but right beside their house) and started making some measurements.  Almost immediately, Mr. Blond approached to ask what he was doing.

Dad said, “Well, I’ve been thinking about raising some pigs and I thought this would be the best place for the pen.”

Dad went on about how they would keep us stocked with meat and bacon and that Mr. Blond should try to make sure the kids didn’t bother his pigs.  He made some marks and put a few stakes in the ground, then went back in the house, leaving the big guy to stew about this new development. 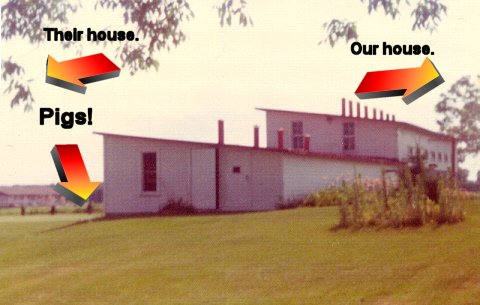 Of course, there were no pigs.  Dad was completely screwing with him.  But the thing is, he totally would have if he could have gotten either of his sons to buy in on the plan.  He traveled too much to care for the pigs himself so my brother and I would have had to do most of it.  This was one of the few times my brother and I were on the same page.  We told him there was no way we were taking care of any pigs.

Dad was mildly disappointed.  It would have been his crowning glory… investing in raising thousands of pounds of pig, for no other reason but to annoy the neighbors.