Thoughts on a Lost Art

Let me start by saying that I’m a “keeper,” and by that, I mean that I tend to keep everything and save it until I’m absolutely sure there will be no further use for it. It’s like, “When in doubt, put it on the pile.” Then when “The Pile” gets big enough, I go through it. Usually, there are some things on the bottom of the pile that I now know I won’t need, so I toss them. An old boss described that method as “saving something until it becomes trash.” I live in fear of needing something I just threw away.

This tendency extends in many directions, not least of which involves keeping old cards and letters. I have a drawer in my desk that contains correspondence going back to when I was 15. Any time I’d get a card or letter, I’d toss it in the drawer. Eventually, after 45 years, it became clear that one day I’d have to go through it all and do some sorting and tossing if I ever wanted the drawer to open and shut without the use of a hammer or crowbar.

Last March, I decided it was time and dove in. It took me a solid couple of days to work on it. The biggest time suck was reading all the letters, to see if there was anything remarkable and worth keeping. I didn’t want to chuck everything… I wanted to at least keep a representative sample from the various people who have written.

The most interesting thing was the oldest pack of letters I had, which came from an old girlfriend, right after my family left town. Now, this wasn’t exactly a fully-executed relationship. We had only decided to “go together” a few weeks before we moved from Columbus OH to Toledo OH (about 150 miles away). I was 14 and she was my brother’s age, or about three years younger than me. She had been my first kiss (that didn’t involve “Spin the Bottle” or “Truth or Dare.”)

Anyway, it was all very Romeo and Juliet (only without the teen suicides.) Two starry-eyed youngsters torn apart by the machinations of the adults.

So we corresponded regularly for a couple of years before the whole thing dissipated. I did see her one time later… The year after I’d graduated college, I was living with my fiancée off-campus, when I saw her name in the student directory. We met up in her dorm room to catch up on old times. And that was pretty much that.

So, after reading all these achingly heartfelt lovelorn letters this past Spring, I decided to try to reach out to her and see how things turned out for her, these 40-some years later. I couldn’t find her on Facebook but I Googled a White Pages listing for her that showed her in her old house. So I took a chance and sent a letter, asking how she’s been, telling her a little about my circuitous journey since Columbus, and assuring her that I didn’t “want” anything other than to catch up. I included a scan of one of her letters so she’d know it was really me.

It wasn’t until after I put it in the mail that I Googled her again and saw some more names for that address, one of which I realized was her married name. So she was married and had a high-school-aged kid.

I mean, that’s fine with me and all, I just thought it would reduce the likelihood of her responding. And it very well might have because I never got a response. I don’t know if she ever saw the letter. So I let the whole thing drop.

It was interesting going through the rest of the correspondence. Because right as the college years started, two of the four guys I was closest with left town, one for the Navy, another for South Georgia. So there was a lot of letter writing among us. I had letters from relatives young and old, various friends from jobs I no longer had, lots of Christmas and birthday cards, and, of course, a ton of letters from my mom and dad.

After reading them all and tossing the non-keepers, I sorted what was left into piles by author, then tried to stack them in chronological order, so I could tie them up so they wouldn’t stray. By the end of the exercise, I could once again close my correspondence drawer, and there was room for more.

So, you may ask, what did I learn from this laborious endeavor, the lost art of letter-writing? Here are a few thoughts:

·        I really wish I had a letter opener, way back when, because from the sight of the envelopes, I apparently opened mail like a rabid badger. So many of the envelopes were all torn up at the top, which hindered my ability to determine the letter’s date.

·        I also wish people would have properly dated their letters. Writing “September 1st” or “Wednesday the 16th” is no help to me at all when trying to date letters from decades ago.

·        Similarly, people who sign their letters “Me,” are most unhelpful. If I didn’t have the envelope (or if it looked like it had gone through a rusty shredder), I had to parse the letter carefully to look for clues as to the author.

·        In 2021, reading handwriting, even nice handwriting, is exhausting. I am so much more accustomed to reading typed material.

·        People who threw some illustrations into the letter were much appreciated, if for no other reason but they broke up the mass of words.

·        I miss seeing what I wrote back. With email, you usually end up with a record of the whole conversation. There were a few times I was dying to know how the hell I answered the questions I was asked. One time, after learning that I had a new girlfriend, my old Columbus girlfriend wanted to know, if her family moved up to my town, would I drop my new gf and go with her? I could see now that my answer called for extreme tact and delicacy, and I can only hope my 15-year old self knew enough not to go, “WTF, are you nuts?”

·        Some compliments can burn in retrospect. Like the one from my college girlfriend praising me profusely for staying with her despite a problem we were having. I eventually broke up with her because of that particular problem. (Her mom absolutely hated me. We had to date in secret because she was forbidden to see me. You can read the details of that mess right here, if you wish, and in the post that follows it.)

We’re having a memorial celebration in my Dad’s honor next weekend, one which will feature a lot of storytelling. This is one I may share:

When we moved up to the farmlands of northwest Ohio, it was quite unlike our old suburban neighborhood. Houses were interspersed between fields and much farther apart.  We happened to have one neighbor that was close by, with our barn in between the houses.

These neighbors were people that seemed better suited for a gated community than open farmlands.  We knew they were a bit “off” when we first moved in.  The first thing they suggested to us is that we take down the sun porch from the front of the house, and put up pillars.

Fucking pillars!  Like it was “Tara” or something.  We pegged them as tools pretty quickly.

They were a prototypical WASPy couple.  He was a big blond dude, broad shoulders, about 6’2”.  Former athlete.  She was his little blond cheerleader.  They had one little blond boy and a blond baby girl.  During the big jogging craze of the 70s, Mrs. Blond decided to jog.  She would put on her best fashionable tracksuit and jog.  Up and down the driveway.  She could have even jogged the perimeter of their property and it would have added up pretty well.  But no… up and down the driveway, back and forth, about 30 yards each way.  Weird.

A little later, they decided to take up tennis.  They got matching tennis outfits, got some fancy new aluminum rackets, and started taking tennis lessons.  I don’t know how it came about, exactly, but Mr. Blond wanted to know if he and Mom would play them in doubles.  Now, Mom was not then, nor has ever been an athlete.  So Dad suggested he team up with our neighbor across the street, Mrs. Mo.  (“Mo” is short for a very long and very Polish name with more consonants per square inch than a Warsaw phone book.)

The Mo family were athletes.  Mrs. Mo was the only girl in a family of large brothers, one of whom was an NFL lineman.  Her son was a middle linebacker in high school.  I believe she was an athlete as well, but I don’t know any specifics.

But Dad didn’t even have a proper tennis racket.  The only one we had in the house was this old thing with steel strings that we picked up at a garage sale.  Every time you’d hit a ball, it would go “SPROIIIIIIING!” 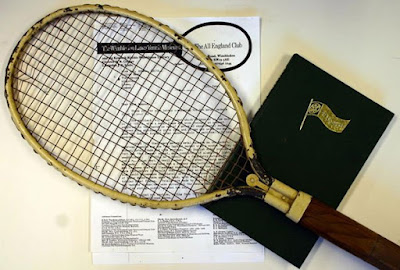 It looked just like this.  Who knew it was an actual ‘antique?’

So my little 5’9” Dad, with his steel-stringed racket, who hadn’t played tennis in years, and Mrs. Mo took on the Blonds on the tennis court.  I was afraid it would be an embarrassment and I was right.

Dad and Mrs. Mo kicked their asses all over the court, beating them 6-0, 6-0.  I wasn’t there, but it must have been something to behold.  Dad said they were just atrocious… could barely get the ball over the net.  It must have been quite a sight to see the two short, stocky, older players with the “SPROIIIIIIING,” running the young jocks off the court.

More stories involving my dad screwing with The Blonds will be forthcoming.

Just to say Hi and thanks for the column. I do enjoy reading it
Greetings from sunny South Africa

Thanks for stopping by, Coops, and for letting me know you're still around!

Old girlfriends. I have never lost touch with a couple of them. Love the dad vs. blonds story. Please do share some more of those.

Hey, Jono...
I used to write about old relationships a lot in the earlier years of this blog. There was much more story-telling and less politics, up until I ran out of stories.

There are some "Dad" stories tacked onto the end of the last month's worth of posts, it you'd care to check them out.