As we all have seen by now, all hell has broken loose in Ukraine and the Russian invasion has commenced. I’m not going to be one that analyzes all the war activity… there are too many others that will do this far better than I.

I’m more inclined to look into the political aspects of it here at home. The thing about war is that it becomes a huge political weapon, even in the countries that aren’t in the line of fire, especially in the current political, zero-sum, fight for power. I’m watching the Radical Right jump all over this because as it’s been pointed out, yesterday’s armchair epidemiologist is today’s geopolitical scientist. So let’s pull apart some of the things I found over the weekend. 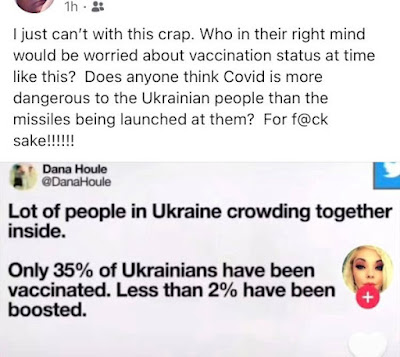 I wonder, are people killed by COVID any less dead than those blown to bits? Both are nasty ways to die, it’s just that one is less dramatic. Yes, even under siege, COVID could still be an issue. That’s the thing about viruses. They don’t care about what else is going on, they just keep spreading to whomever possible.

As bad as it sucks dying of COVID in a hospital, it’s got to be worse someplace without even basic medical care. I mean, “My kingdom for a Tylenol,” right? So why tempt fate? Vax and mask status is a legitimate factor.

In fact, it could be a masterstroke of evil from Putin. For all we know, he could have sent infected Russian nationalists down into the crowded areas for the sole purpose of spreading COVID. That’s the kind of sneaky shit the KGB was known for. How demoralizing would it be to survive an armored onslaught, just to succumb to a virus? Vlad wants the real estate; he doesn’t give a shit about the people.

Then there are the people desperate to blame the invasion on Biden, and [stifling a laugh] think TFG would have prevented it. 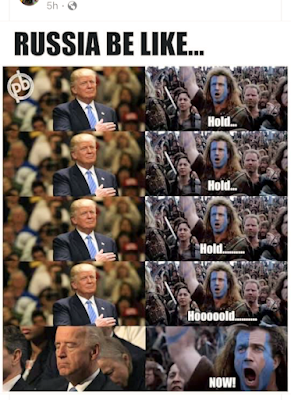 Seriously? There would have been no need for the Russians to invade because TFG would have rolled out the red carpet for them. He was under Putin’s thumb from Day One.

Who held up arms sales to Ukraine via extortion? Trump.

Who lifted the US sanctions on Russia for invading and annexing Crimea? Trump.

Who praises Putin at every turn, even praising his smarts regarding his invasion? Trump.

Who pulled US troops out of European bases? Trump.

Who wanted to pull out of NATO? Trump.

Who is the only president to meet with the Russian leader with no witnesses and no transcripts? Trump.

Who backed up Putin’s take election meddling, taking his side over that of the entire apparatus of US Intelligence? Trump.

Who abandoned a leadership role on the world stage and left it to the French and Germans? Trump.

Who probably agrees with Bluto and thinks the Germans bombed Pearl Harbor? Trump.

Who stood up to Putin at least one time? Not Trump. Not ever. 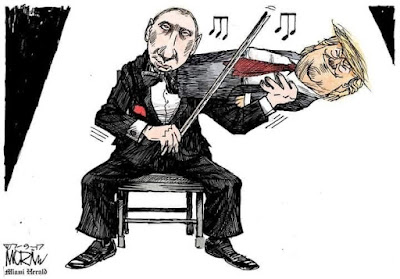 Name one foreign policy maneuver from his term that didn’t benefit Russia? Every move he made was to Russia’s advantage, one way or another, right down to downplaying the coronavirus. Anything that has Americans fighting each other is just fine with Putin.

In fact, I’m sure Trump envies his audacity and wishes he could send our troops up to Canada to defend the Trucker blockade. TFG would be zero deterrent to Vlad’s plans. Putin owns him lock, stock, and barrel. Anyone who thinks otherwise is massively uninformed, either willfully or otherwise. 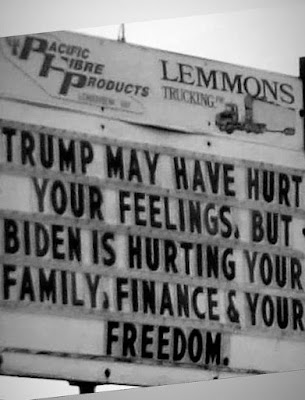 Is Biden banning or burning books? No, Republicans are.

Is Biden forcing women to give birth against their will? No, Republicans are.

Is Biden coming after the free use of contraception? No, Republicans are doing that.

Is Biden erecting barriers to free elections? That’s the Republicans again, creating legislative powers that allow them to overturn election results as they see fit.

Is Biden running companies that are using this opportunity to jack up prices while simultaneously coming off a period of huge profits and executive pay hikes? No, that’s the modern Republican businessman, price-gouging for profit and power, knowing that their actions will be blamed on a convenient political scapegoat.

Is Biden letting the Russian invasion carry on without repercussion? Nope, he’s levying and supporting the strictest sanctions ever placed on Russia, which is working like a charm. The ruble isn’t worth the paper it’s printed on. Their economy is collapsing and the oligarchs are pissed. People are even protesting in the streets, a true rarity in Putin’s Russia. It’s Republicans like TFG and Tucker C. who are praising Putin’s tactics and wondering why we don’t support the invaders.

And while we’re at it, talking about fragile feelings…

Who is campaigning on removing accurate portions of the history curriculum so that it doesn’t upset little white kids? Racists… I mean, Republicans.

Who is trying to bring back Jim Crow laws and apply them to gays? Homophobes… I mean, Republicans.

Who is pitching a fit about rules created to prevent mass casualties, using proven scientific methods? Republicans, who would rather die than admit they’re wrong. 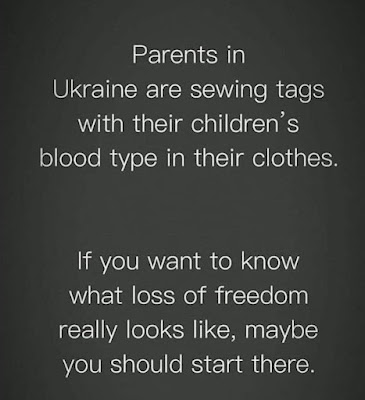 They whine about minor inconveniences being an assault on their “freedom,” while real patriots in Ukraine bear the true assaults on freedom.

If people are genuinely feeling an assault on their “family, finance, and freedom,” they need to look beyond Fox “News” and the GOP troll farms for valid answers. 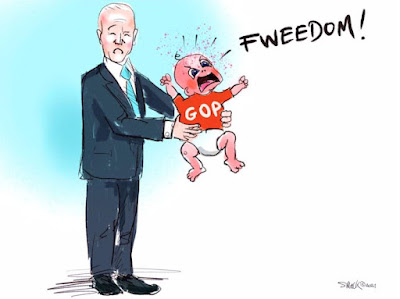 Side note: They also like to use this war as an excuse to keep their home arsenal intact, ignoring the geographical reality of Russia and Europe. There, countries are stacked up right beside each other, with multiple borders to defend, where we have only two neighbors, both of whom are allies. If either of them ever amassed their armies along our borders the way Russia did, we’d know in an instant and they’d be bombed out of existence minutes later. Anyone coming en masse from across the ocean, we’d see them too and the military would be all over it. There is no need for armed the kind of armed civilian resistance these yahoos are salivating over thinking they’d execute. “Red Dawn” was not actually a documentary. They’re still trying to tag Biden with the price of gas. So as a public service, here’s a little primer on gasoline: 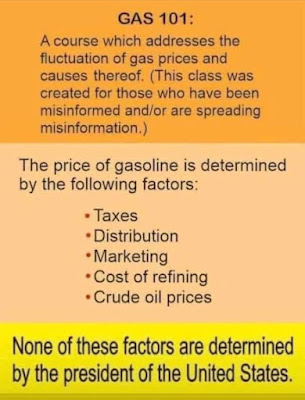 You know, gas spiked under GW Bush (of the Bush Oil Dynasty) too. But never heard a peep about it coming from the right.

As for the crack about the 2AM vote count, that’s what happens when Republican-controlled states ban counting the votes in advance… the states have to work into the night, where, brace yourself, results are tallied. Sometimes you like them, sometimes you don’t. It doesn’t mean they’re not legit. And if you think you know something, put up or shut up. Show the proof. So far, every single lawsuit alleging democrat-driven voter fraud has been laughed out of court, by judges appointed by both parties.

There will also be delays when you have mobs of people hindering the counting, under the guise of “supervising.”

The bullshit about voter fraud is now and always was, a nothing-burger. The fact that this stuff is still being trotted out is really an indictment of how little they have to complain about. I guarantee that if all the results were posted before 11:00 PM, they’d say that it was rushed, or the count was predetermined.

It doesn’t matter what happens; Republicans will find fault and blame Democrats. They don’t actually create their own policy points, all they have left is a race to claim victimhood.

Rightwing memes about how weak Biden is or how strong Trump is are of course the fantasies of children. Trump almost dismantled NATO and if Putin had invaded Ukraine, Traitor Trump would have sent US forces to seize control of Kyiv to turn it over to Vlad.

Exactly my point. Trump would have put up as much resistance as a barrel of STP.

IQ45 has been the Puppet of Vlad for a long time, comes down to Debts owed and he owes a lot of people money that he couldn't borrow from legit sources long ago and the payback was favors if he couldn't perform... which was the whole point they loaned it to him of coarse. The Russians got him Elected and their Election interference should have been the big Investigation during his term, since, if any Prez was invalidly elected it was that one! As always you rocked at dismantling the Lunatic Fringe Memes that the Far Right grab onto and run with as factual and aligns with their conspiracy theories they get from other questionable sources. Ukraine is showing the World what True Patriots defending a Democracy look and act like, talk like, and have the admirable qualities we're sorely lacking in America these days. After that recent strike on a Nuclear Power Plant, I think the NATO Countries need to step up... if Vlad can't get all the Real Estate he desires, he'd have no problem making Earth worthless Real Estate for all. Here's my own theory, he may know he's seriously unwell, perhaps even dying so he'd like to take us all with him? Let's face it, he's certainly not close to what he used to be and everyone sees it, the deterioration of his Mind alone is as evident as it was with our previous unhinged President.

Vlad is not action rationally, which makes this all so much scarier. Who knows the limits of damage he's prepared to do?