I’m growing much more pessimistic regarding the invasion of Ukraine ending anytime soon, or without becoming a nightmare of epic proportions. I just don’t see a clear way out, mostly because of Vlad.

He seems to be impervious to outside influence. The stranglehold that’s being put around his country, one that would cripple most leaders, won’t have the effect we’re hoping for, because very simply, he just doesn’t give a shit about anyone or anything aside from his personal agenda. No wonder the Republican power players admire him.

He doesn’t care about his people. He’ll tell them what to think and what to do and any dissenters will find themselves in a deep hole in Siberia before they know what happened. He’s already instituted a new law punishing anyone publishing “lies” (meaning the truth) about the military exercise/invasion in Ukraine, so they're not going to know what's really going on, kind of like Fox "News" viewers. Even when he ran for office, I bet his campaign motto was “You’ll get nothing and like it.” The Putin/Smales ticket.

He doesn’t care about civilians in Ukraine; hell, he’s targeting them on a scale like no other military leader in memory. He can’t be shamed with casualty figures because he gives less than a shit about killing women and children.

He doesn’t care what other countries think. All he wants is to be feared. That’s why I don’t see him backing down, ever. This isn’t the kind of guy who’s going to go, “OK, this isn’t working, the cost is too high in lives and rubles. Let’s turn this thing around and go home.”

No, he’s in it until he gets something he wants because the one thing he will not do is accept failure or defeat. His ego will not permit it, so it’s full speed ahead. I suppose it’s possible that he just creates an objective that he can obtain and call a win. With his control over the Russian media, he can tell them anything he wants and make them believe it. Like, “I just sent some of our boys out to pick me up some vodka and cigars and they got a little carried away!”

Personally, I think the only way we get out of this is if the Russian mafia has him whacked. He’s stepping on their livelihood and I’m sure that’s not going over well. Of course, Putin knows this too so he’ll be very hard to reach. This is a guy who knows how to be cautious. If you know how to assassinate, you know to prevent being assassinated. 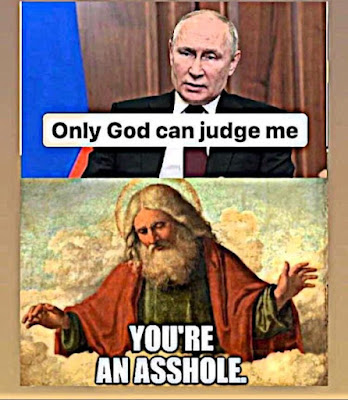 I know there’s a faction that’s clamoring for escalating our military activities, from enforcing a no-fly zone to dropping bombs on Russian troops. I think we need to be verrrrrry careful about that. This is the first time in a long time that we have an enemy that can hit us back on our turf. If we start dropping ordnance on Russian forces, how long before Vlad lights up the west coast? Hell, they’ll no doubt take a shot at Washington DC too. That can easily take Baltimore with it and then goodbye Bluzdude.

Like I said, he doesn’t give a shit about his own civilians if we retaliate, and he cares even less about ours. I’m just saying that the consequences can be devastating, right here within our borders, so no matter how tough we like to sound with our buddies down at the bar, cooler heads need to prevail.

The last few months have been a real learning experience. My father and brother-in-law both passed away suddenly late last year, but left very different circumstances in their wakes. Both handled all of the household finances and bank accounts.

My dad left a considerable trail of breadcrumbs. I already wrote about bringing home his “Go-bag,” containing all their important documents and $22k in cash. He had 2 handwritten pages included, that documented exactly what documents were in the case. He also had a piece of notebook paper on his desk that included (almost) all of his online passwords, plus a few on post-it notes. I know that’s not terribly secure, but it was most useful in trying to work with his accounts and investments. My brother, who works in accounting, was able to put things together fairly quickly.

Sadly, my sister’s husband left no such trail. He had been working on creating a reference for her, but he apparently never finished. She couldn’t even get into his computer or phone. It took a lot of sleuthing from my brother and one of my BIL’s work friends to figure things out and get a bead on how the finances stood.

These scenarios reverberated through our family, particularly with Sweetpea and my brother’s wife. Both were determined not to have such a situation repeat itself. I know my brother and sister-in-law sat down and went over things a few weeks ago.

I had been wanting to do something similar with Sweetpea for ages, pretty much ever since we got married. But it was never a front-burner issue until now.

Back when I was a single apartment-dweller, I got the notion that I’d better leave some similar tracks in case I were to drop dead. Someone would need to know what’s what, so I created a simple Word document that detailed how to get into my phone and computer, how to find my passwords, what kind of accounts I had and where, what I wanted to be done with my stuff, and so forth. I bought an online will, which I completed but never “activated” by getting it witnessed and signed. I posted about all that here.

So all I really needed to do was adjust the document to reflect the needs of my married status and then go over it with Sweetpea. I feel better now, knowing that she knows how to access everything and what to look for. I didn’t want her to ever think I was keeping financial secrets from her. I’d hate for a big chunk of change to end up going to the state, just because no one knew it was there.

The other big issue is the dispensation of “stuff.” Good god, we do collect a lot of stuff, don’t we? My mom and brother were back down in Florida last weekend going through the contents of my parents’ house. You know, what to keep, what to sell, what to donate, etc. Even as scaled back as their place was, there’s still so much stuff!

It doesn’t help that we all collect sports stuff. Dad had a whole curio full of figurines, stadium replicas, framed pictures, autographed balls, etc. My brother and I have similar collections. These things all seem so important to us at one time or another and then, poof. We’re gone and someone has to figure out what to do with all our shit. 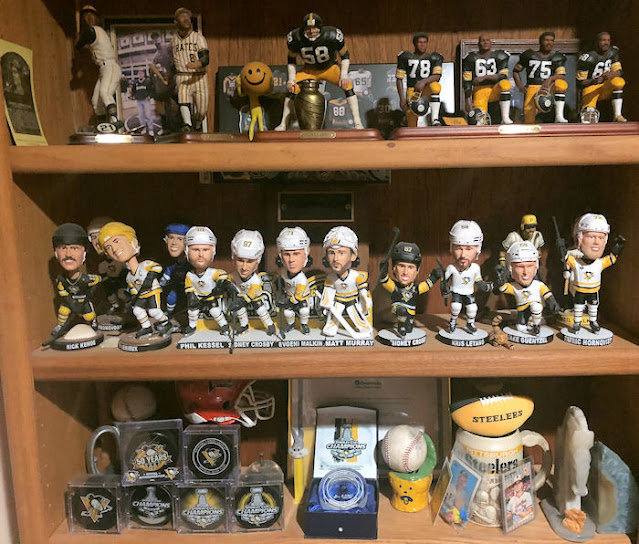 My swag shelves. And this doesn’t even include all the Orioles bobbleheads I’ve collected from going to the games. I had to box them up because I ran out of room.

It leads to an internal struggle. On one hand, it’s something that I’ve become a lot more conscious about. I should really take action to try to sell off some of my stuff, while it still holds any kind of value. Even at this point, who would possibly want a Chris Davis bobblehead? (Former Orioles slugger who signed a huge contract and then never hit above .150 again.)

On the other hand, the Mario Lemieux Foundation is advertising another of their charity duffle bag sales, wherein fans can buy Penguins duffle bags filled with bobbleheads, signed pucks, plaques, coolers, and other swag. I’ve bought them before and each time I think, “OK, that’s the last time.” Until I see the next year’s goodies that I just have to have. So it’s a habit I have to break.

Our house is not particularly big. There’s a lot of room in the basement, but as this is the house Sweetpea and her family grew up in, it’s packed with her family’s lifetime of stuff. I have no intention of adding to it. I need to get serious about selling some stuff off.

Does anyone want to buy a Manny Machado bobblehead?

Great insight on Putin with which many familiar with him will agree.
Your final suggestion on financial clarity is vital for spouses.
Thanks with love, lil Mom

Putin being a Murderous Psychopath means that there is no way to negotiate with him... with his advanced Age and failing Health he has little to lose personally so he wants his Fantasy to come to fruition and he's living so deeply in the Past that the Present doesn't set well with him. A part of me wants America to do so much more, since I don't think he will stop at Ukraine and he'll become all the more emboldened as NATO Countries sit on the sideline afraid that WWIII hasn't already begun and we can dodge this Bullet he's playing Russian Roulette with us... pun intended. Which chamber is the Bullet in and will I keep pulling the trigger until it's fired seems to be his play right now, he's that maniacal. I do think we either address him now or we'll be addressing him just a bit later, my Two Cents worth is... he won't stop wanting more... the Real Estate is all he cares about, whether it's destroyed and uninhabited or not. He sees any kindness as a weakness and to him all his adversaries try so hard to be kind and do the Right thing.

I just don't see how one deters a guy who doesn't care about collateral damage. And I just read an article about the extreme lengths he goes to, to ensure his own safety. He's a very hard target to get a shot at.

Indeed he is not at easy Mark. The Man has been a Sniper and told me it's very difficult to Murder a Murderer, they've studied the whole Play Book carefully and typically Take Out and Neutralize any Threat right away. I know he's Right, I know the Authoritarian Ruled Countries are difficult to gauge what their Public really thinks, since it's too risky for them to show their Hand without dire risks. So, insulating them from all credible Sources is how he keeps Russians under his Control, otherwise, I do think the uprising would come and he'd be eliminated from at least Leading said Country.