I'm at a loss for subject material today (that I haven't already written about) so I thought I'd amuse you with this rerun of a post I made in 2010, after having a fascinating experience in and outside of an airport restroom. No, there were no Republican Congressmen involved.

To get to Amelia Island, we had to fly through Jacksonville airport and I must say, they had fascinating restrooms.

First of all, their sinks were amazing, in that there weren’t any.  I went to wash up, (not because I peed on my hands, but because it’s just the right thing to do), and I saw lots of soap dispensers and spigots, but no sinks.  There was only a long flat countertop.  Upon further review, I noticed that the counter was slanted back towards the wall and between the end of the counter and the wall, there was a long trough for the water to run into.
It really doesn’t take much to amuse me.  I would have taken a picture but then I’d be letting women in on all the secret stuff we have in men’s rooms.*  Luckily I found this one with The Google: 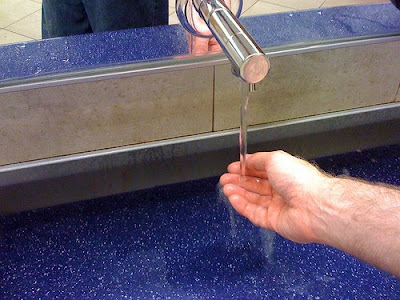 Photo by David King via his Flickr photostream.  Apparently, he thought it was as cool as I did.  More importantly, he avoided showing the secret restroom stuff*.
But the real interesting thing to me was the décor of the restroom entrances.  It seems they put up every existing variation of the restroom symbol of “trouser guy” and “skirt girl” known to mankind.
While waiting for my girlfriend to get done in the lady's room, (which was labeled in a corresponding way) I stood and stared at it for a while, as ideas began to bubble up.  I took a picture of this vast display of manly restroom symbols so that I could come home and bring you these descriptions of some of those to whom I thought this restroom was catering: 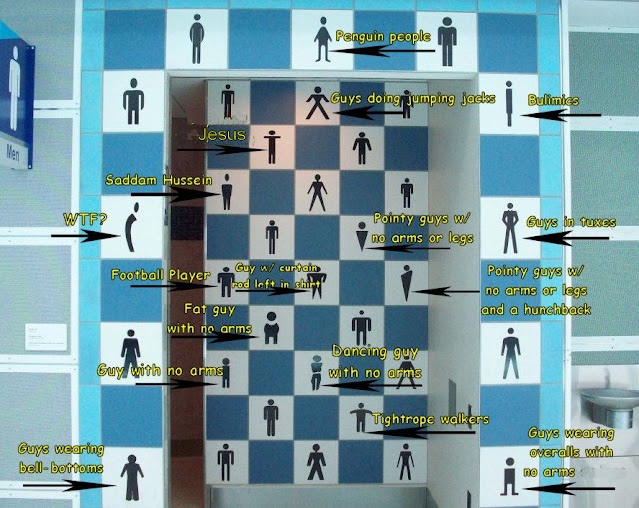 There wasn’t room to describe all the symbols, so I picked my favorites.   With one exception, the captions are directly above the arrows that point to the symbol. One of these is rather dated, so I apologize if the meaning isn't clear.**
I was really intrigued by the one I labeled “WTF?”  I mean, how the hell is that “male”?  I checked the corresponding female one and it was practically the same thing, only the curve was upside down.  What is that?  Bowing dude?  Parenthesis man?  Comma guy?  Scoliosis person?  I give up.
*Ok, we really don’t have any secret stuff in the men’s room; I’m just trying to create intrigue.  I know there is secret stuff in the lady’s room.
**If you'll recall the news from 2006, Saddam Hussein's head came off when they botched his hanging.
Posted by bluzdude at 4:23 PM

Women have those sinks too. 😁 I find the pictures a head scratcher.

Maybe that's what the "WTF" pic is... some kind of scratching tool.

I've seen some fascinating Restrooms in my day but the Jacksonville Designers really went all out, didn't they? I didn't know Saddam's Head popped off, the Trivia I don't know is astonishing!

Yeah, there's a whole science around calculating the proper height to drop the hangee in proportion to his weight, so that his neck breaks but the head stays on. Apparently they weren't concerned about style points when they strung up ol' Saddam.

Wow! These are super interesting, and as always - fun! Hope you and Sweetpea have been well. You and your family are always in my thoughts. Sending lots of hugs,and Happy Friyay! RO

We've been fine, thanks. And welcome back to the public arena! I've missed you!