The news was last week that Florida Man Ron DeSantis went full-on Fascist by steamrolling a bill through the state legislature that removes the special tax situation that was created for Disney World back in the 60s, that essentially allowed them self-government. This was not done because a deep dive told him that it would be in the state’s (or anyone’s) best interest to revoke the deal, but because Disney dared to push back on his obnoxious new “Don’t Say Gay” law, going so far as to turn off the spigot of cash donations to Republican interests in the state, so they needed to be punished.

There are some on the right who are whitewashing the story, trying to be all cute, and turning things around on those stupid Libs. 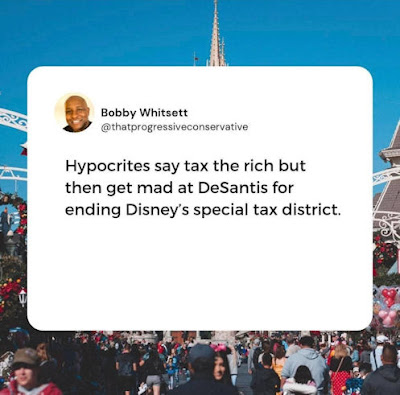 No, you really don’t.

Democrats and Liberals aren’t mad because a cozy tax haven got revoked, we’re mad because the tax reversal was done as a punishment for not going along with the governor’s philosophy (that gay people are evil and need to be removed from public view. And that somehow, acknowledging that there are gay people equals grooming children for abuse.)

Pretending this is all about the benefit or liabilities of tax structures is beside the point, in fact, it’s so far away from the point, it’s a complete misdirection. But they know that. It’s the Republican Way: When you can’t defend a point, change the focus to something you CAN defend and run with that.

Whether the governor can win a war against the state’s biggest employer remains to be seen. One could even argue that he doesn’t care if this action sinks the state because he’s looking at the presidency. We all know that conservatives are willing to overlook a little fascism in the name of winning the Culture War.

What this new breed of Republicans is showing us is that they hold no principle higher than complete obedience to whatever they hold to be their current dogma. It used to be Business Over All, (and to many in the Old Guard, it still is), but now it’s all about bringing America back to the 1930s, where Blacks were marginalized, women were powerless, gays were invisible, and it was a very good time to be a straight, white, Protestant man.

We are in the process of selling my parents’ house in Florida. Once the sale closes, I’ll be content to see the whole state break off and float off into the ocean. They can set up their own little island nation: Redneckistan. Instead of a banana republic it can be an orange republic. Or maybe even grapefruit. (And the smattering of progressive people still living there are free to immigrate up here to Maryland, as described in my previous post.)

Where’s Ozzy When You Need Him?

I meant to comment on this a couple weeks ago, but you know… shit happens. The original story was about how a bunch of people started singing religious songs to celebrate Easter onboard a plane.

This would have driven me batshit if I was on that plane, although maybe less so if I had my MP3 player and headphones with me. Nothing like a little Devil’s Music to drown out the noise of a planeload of True Believers pushing their bullshit on a captive audience.

I’m sure there were many people who found this atmosphere off-putting, but naturally, Fox goes after their favorite whipping girl, Ilhan Omar. (Maybe they were already flogging Maxine Waters and AOC on other issues.) So OF COURSE, Fox says she was mocked for objecting. Fox is hip-deep in doing the mocking!

And once again, they turn the issue on its side by using a misleading question like, “Why do you hate Christians?”

They know it’s not about hating Christians or anyone, it’s the resentment of these people’s audacity in loudly expressing their own version of morality/reality and recoiling when the intended victims have the nerve to object.

I would love to have seen another group on the plane counter with a rousing version of Highway to Hell. Or maybe even Shot Down in Flames (from the same AC/DC album.) Do they want to turn a simple flight into American Idol auditions? We can play that game too.

Often when I’m writing about police violence and/or corruption, I bring up Baltimore’s infamous Gun Trace Task Force, which blew up into a major scandal a few years back. An elite unit charged with getting guns off the street turned into a real-life version of The Shield, by rolling anyone who looked like they had money, stealing money, guns, and drugs from arrestees, planting evidence, claiming overtime for unworked hours, and finding new and exciting ways to flout the law to enrich themselves. They were essentially a street gang with badges.

If you are an HBO subscriber, tonight begins a 6-part series on the Gun Trace Task Force, called “We Own This City.” It’s based on a book by the same name written by a couple of Baltimore Sun reporters.

This is what happens when a police force has no oversight or accountability. Their actions in no way made the streets safer. In fact, due to the scandal, the members of this unit could no longer be called to testify in court, due to issues with credibility. This allowed those they arrested, from hardcore criminals to violent drug offenders, to those that just got picked up and robbed, to go free.

This is a story to keep in mind when you find yourself debating with some knee-jerk police apologist who talks about bad apples. This little batch of apples tainted the entire police department, a stain that they’re still trying to scrub out.

Well... perhaps Disney should just relocate to a State that will appreciate their stance on protecting a marginalized group and having the cajones to object loudly enough that it hurt those ReTrumplican Extremists pushing their own biased agendas upon everyone. Can't we just give Florida to Cuba?

OOOPS, just realized I already suggested we give Florida to Cuba... and as Infidel responded, I doubt they'd want it... or Mexico wanting Texas... so, nevermind. *winks*

I read that Texas invited them to relocate there but I don't see why Disney would go to all that expense just to trade one budding fascist state for another.

They shouldn't accept the Texas invitation since Texas seems as fascist as Florida and the Lunatic Fringe is dominant there. I can't even suggest our State as Arizona has it's fair share of Lunatic Fringe elected and among the population. If it weren't for the huge Urban influence here, it would still be a ReTrumplican Cult Base State... all the smaller Towns in Arizona are filled with The Cult.

I agree. Nothing changes unless the good cops no longer tolerate and cover for the bad ones.