I love that President Biden has come out publicly for a tax on the Super-Rich. It’s about time. But it’s funny seeing so many of the lunch-pail brigade criticizing the proposal as if it wouldn’t make their own lives so much better. It just shows they’ve been well-trained by their overlords at Fox “News,” who bleat about the plight of those poor, trod-upon billionaires, who are only trying to put bread on their family’s tables, just like you and me. And by “bread,” I mean thick bundles of cash and reams of stock portfolios, possibly tinged with the blood of those who did the work that reaped such benefits for the executives.

Already I see lots of moaning about the terrible unfairness of it all, how these put-upon billionaires would be taxed on earnings they haven’t even realized yet. I say, screw’em. All the better to get some of that cash before they stash it in off-shore accounts.

This is a group that has had so much for so long, they don’t even understand how badly the rest of us get screwed. Or maybe they do but WE don’t. All I know is they can afford to shake some cash down to better the lives of the rest of us poor wretches, slaving away in stores, factories, or god-forsaken open office seating areas. And once they’ve been taxed, they’ll STILL be billionaires, with plenty of dough leftover to fund their next yacht.

And if they still want to complain, my counter-proposal would be to keep the tax structure the same but eliminate all the loopholes they use to pay a lower tax rate than do you or I or the janitors who sweep up their offices after they leave. Just pay the taxes as already directed by the tax code, on the straight up. Then we’ll see how they like the new proposal.

Did you see this headline/story?

So this is how they’re going to handle the acts of savagery being brought to light in Ukraine… by putting out absurd lies that no one with half a brain cell believes*.

I wonder if Republicans know that this is how the rest of us look at their ongoing stream of bullshit stories. You know… BLM and Antifa were behind January 6th, Democrats are Satan-worshipping, child-eating pedophiles, TFG really won the election, tax cuts to the top trickle down to the rest of us, abortion laws are to protect women, recent local election rules were passed to fight election fraud, etc.

I don’t think it’s a coincidence that both Russia and the Republicans dissemble information and distract our attention from the truth in the same way. Top Republicans crave the kind of sheer, all-encompassing power wielded by Putin and Kim Jong Un. It’s such an inconvenience to have to pledge fealty to a system of government that sometimes puts them out of power for the flimsiest of reasons, like ““The People” want someone else in charge” or “they totally botched the economy the last time they ran things.” It totally interferes with their siphoning tax dollars into the pockets of those who have the most. The rest of us would just waste it, I guess. Stupid peasants…

Out, Out Damned Twat

Speaking of distractions, did you see the latest verbal excrement from the Colorado half of the famous performance art duo, Heckle and Dyed?

The quick answer is that buying beer or cigs is a decision, whereas sexual orientation is not. And I think most kids know pretty early on regarding where their interests lie. I know that even from my earliest school days, I was interested in holding hands with girls, not boys.

I think that ignoring the signs from your child regarding their orientation would be akin to abuse. Why punish a child for knowing that they’re “different” at an early age? This needs to be an issue between the parent and child, and not the government, least of all some uneducated freshman Representative who’s better versed in attention-whoring than passing legislation.

Knowledge is Knowing That We Know Nothing**

I see a lot of impatience afloat regarding the progress of filing charges against TFG and the rest of the 1/6 Planning Commission. All I’ll say is what I said while the Mueller Report was being assembled: There’s no sense in speculation or even forming opinions because we don’t know jack shit yet. This process has been buttoned up and leak-proof. The wheels are turning slowly and that goes against the grain of our “I Need Answers NOW” culture. If we don’t have the beginning, middle, and end of the story in 42 minutes, plus commercials, we have a collective fit.

Look, you’d like to see TFG get rung up, I’d like to see that too. But they have to tread carefully if they want charges to stick. It will be unprecedented to charge a former US President with such serious crimes. And you know what they say, “If you take a shot at the King, you’d better not miss.” Because if he beats the rap, it will be open season for presidential corruption for the rest of our days. Given what we already DO know, you’d think charges should be obvious. But we don’t know what we don’t know. So there’s no sense in squawking about the lack of progress while we don’t know what progress has been made. So let’s just breathe, huh?

And hope we’re not in for another Mueller-sized swing and miss.

**Most bodacious thanks to So-Crates for the subheading quote.

…last week to one of the great rock guitarists of all time, Angus Young. 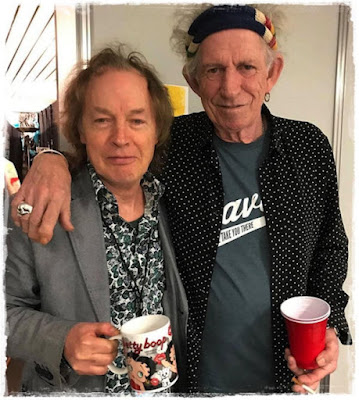 Too much “cool” for a single photograph. This was from Keith’s FB page, and said “Happy birthday to the ‘Lil Devil.’”

Angus turned 67 on 3/31. This guy is probably responsible for my ongoing neck and back pain, stemming from the long sessions in my youth I spent imitating Angus’s manic head and knee bobbling at parties, with the AC/DC cranked up. The guy’s a freak of nature and I can’t believe he’s still out there doing it.

And just because everything is better when Samuel L Jackson is involved: 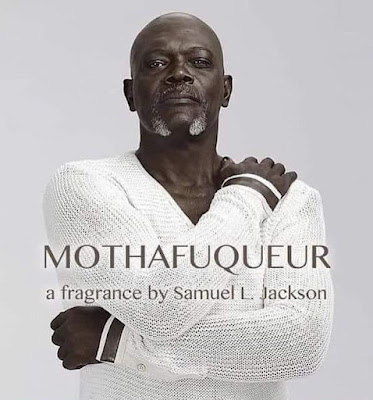 OK, not so much a story as a relic. My brother found this while cleaning out my folks’ garage in Florida, the legendary “Bar-Noculars.” 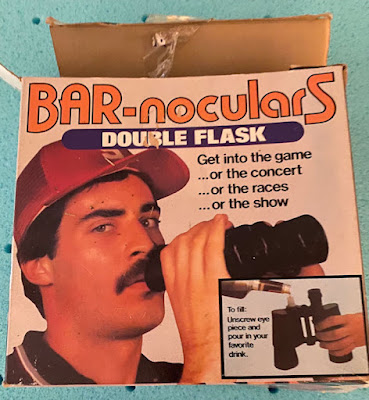 Dad used to use these to get brandy into Cleveland Stadium, among other places, right under the noses of Security.

I’m not sure they would work as well now. I mean, with the giant replay scoreboards, does anyone even bring binoculars to games anymore?  Back in the day, when we used these, the scoreboards only showed stats and stuff. There were no replays to be seen, so you had to pay attention to the actual game. And if you were sitting low in the end zone, like we usually were, you couldn’t tell if a team gained 2 yards or 10, until they posted the down and distance. Binoculars were a must.

I suppose now they’d have to make flasks that look like cell phones.

Bar-noculars! A great concept worth looking into! Or making some if they no longer exist. Long ago I could actually be friends with some Republicans, but so many have gone off the deep end with their self-serving bullshit designed to screw the masses (without kissing them) that it is nearly impossible to even be near them. I hope the kids can outlast their poison.

If not related, then just around the corner.

I've written about those before... we always tried to get flasks inside Cleveland Stadium when we went to Steeler games, because face it, the weather was always miserable. And there was nothing Dad liked better than getting one over on someone. I'll never forget the sight of him, getting patted down by Security, with those Bar-Noculars around his neck, just cheezin' like a butcher's dog.

I wrote about this a couple months ago, about dating or being friends with those from across the aisle. It's a lot harder now than it used to be, because the differences are now so stark. Reality vs Fantasyland. Communal spirit vs selfishness. Kindness vs cruelty. The values are completely different, so it's no longer a matter of simple politics, it's vast separation of what's important. When some on the right still support the Russian invasion and alibi for the atrocities, there is no more common ground.

Your Dad's sly Barnoculars cracked me up. The rest, well, you're not going to get any disagreement from me, we're unanimous on it ALL. I'm always so amused that those barely making it are against some Billionaire paying their fair share and still believe the Trickle Down Theories of yore. I asked one Gal I know, whose a Senior Citizen now, how much ACTUALLY trickled down to her... ever... especially since she had to come live with us for Six Months after Retirement becoz she couldn't even afford a shithole Apartment Rent, let alone qualify to buy a Home. She finally bought a place in a Retirement Community that should have been condemned... that's exactly what her preferred Politicians have in store for everyone like her... yet, they just don't catch onto that. No Fool like an Old Fool whose clung to Foolish Promises never fulfilled by those they think Care about them or the Country.

It just shows how effective the Republicans' messaging has been. They've convinced people that any effort to even the playing field between the massive "Haves" and everyone else is "Socialism" and is to be avoided. That leaves them free to skate by with zero input to the general good. They might even have a leg to stand on if they were paying a realistic wage, but we know that's not happening. They fight every effort to raise minimum wage, and wages in general.

What a fabulous idea! (lol) Sort of reminds me of a lady I worked with way back in the day, who for years came to work with a white sealed coffee mug. We all thought she was drinking coffee or soda...until someone knocked it off her desk and the smell of vodka was rampant.(lol) I really loved her, and she had been at that company for 15 years or so, until that day. Always wondered what happened to her. Hugs, RO

I have a large, insulated mug I've used at work for water, over the years. The thought has definitely crossed my mind that I could fill it up with vodka tonics as well.

I used to do that and bring it to my apartment's pool, back in the day. Held 32 oz, so it would last a while. Was tough gauging proportions though.