The Mojo Boogie - The Rebound Edition

Last week’s game was a tough one for me, with the Steelers losing late against the Ratbirds, on Sunday Night Football.  The Steelers gave up a game-winning 92-yard touchdown drive with about two and a half minutes to go in the game.
That sure makes the old asshole sting a bit.
Luckily, I was off work on the following Monday and Tuesday, so I didn’t have to take too much shit at work.
While I was off, I saw a blurb in the paper about the ratings for the game.  They were huge, nationally, but even bigger in the home markets.  In Baltimore, the game earned a 45 rating and 63 share.  (That means the game was on in 45% of the homes that have a TV, and in 63% of homes that were watching TV at the time.)
In Pittsburgh, however, the ratings were even bigger, with a 53 rating and 71 share.  The article bemoaned the fact that Pittsburgh produced higher ratings for the game than did Baltimore.  (Hah!  We win the ratings war!  Woo hoo!)  The headline asked, “Where were Raven viewers?
Here’s the thing that they don’t understand here.  These things take time.  You don’t just plop a team here (all of 15 years ago) and expect immediate devotion.  The Steelers have always had a decent local following, but the team didn’t become any good until 1972.  So the Pittsburgh market has had almost 40 years to hone their fanatical following.
Baltimore so much wants to be like Pittsburgh… to have what Pittsburgh has, it’s palpable.  That’s a lot of the reason why they hate Pittsburgh so much.  The two cities have a lot of similarities, yet one is perennially successful in sports.  (OK, in hockey and football.  Baseball?  Well, it’s been a while.)
Baltimore denigrates the Terrible Towel, because they have no such thing.  Plus, they’re sick of seeing them waved in their own stadium.
They hate the team, but of course, they have to as division rivals.  And the Steelers have knocked the Rats out of the playoffs on three separate occasions, including in 2 of the last 3 years.
They mock our fanaticism because they have yet to reach our level of commitment.  I’ve walked around the downtown of both places and the difference can be seen immediately.  In Pittsburgh, the streets are jammed with people wearing Steeler jerseys or other apparel.  Yes, there are some that do in Baltimore but it’s a mere fraction of what you see in The Burgh.  And you can’t walk down the street in Pittsburgh without going by a window full of Steelers merchandise for sale.  Whether it’s an apparel store, or a Walgreens, it’s packed with game gear.  Here?  Nada.  You’d barely knew there was a team here, from storefront appearances.
So if Baltimoreans want to compare themselves to Pittsburghers in terms of team loyalty and identity, they have a long way to go.  They have to put in the time.  There are no shortcuts.
The Mojo Boogie
The Steelers play the Bengals this afternoon and it won’t be on local TV, so I’m off to Jilly’s, my local sports bar/restaurant.  The last two times I went there this season, I wore a black Steelers polo, and we won.  But I noticed that both games the Steelers were at home and wore black.  This time, they play in Cincy and will be wearing white.  I considered wearing a white polo, but in looking back to last year, I often wore black polos while the Steelers wore white, and we won then too.  So for the sake of the streak, I’m continuing with the same outfit. 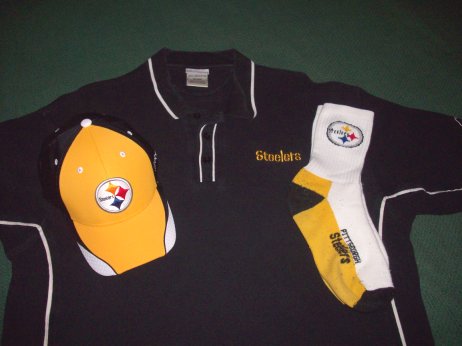 Black Steelers polo with white piping, yellow-fronted hat, with the Hot Arizona Auntie-approved Steelers socks.
I’ll probably have to take some grief at the bar, but whattya gonna do?  You got to take the good with the bad.  No matter what anyone says, we still have the ultimate trump card: 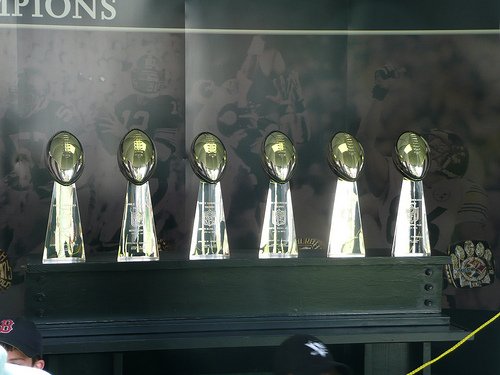 Late Update
Although the Bengals gave them a scare, the Steelers won today 24-17.  It was a good day for me at the old sports bar.  Met 3 new Steelers fans there, with whom I expect to watch some future games.  And now during the late game, the Seahawks are giving the Ratbirds all they can handle.  I'd feel better if they were scoring TDs instead of FGs, but beggars can't be choosers.
Posted by bluzdude at 10:21 AM

Arizona sports fans are equally loyal and committed to supporting the team! We have lots of team spirit here--just walk into Walgreen's, or any supermarket, and check out the stuff!

I am way more into college football, and divide my time between U of A, and LSU (our daughter's alma mater). I even have a U of A golf bag!!

I do not, however, have any U of A socks.

Speaking of socks, I think you took that photo when those socks were brand new! When you are ready to retire them and buy more, I could certainly turn them into a sock monkey for my own edification and enjoyment. Keep that in mind!

Thank goodness your mojo boogie worked this week, Bluz!!! That INT was not Ben's fault (sad face Heath on the sideline) and the 2 picks our D were able to get really made a difference in this game. Due to laundry issues, the only Steelers gear I wore this week were socks. Maybe that needs to be my mojo boogie for the rest of the year? Yeah....not going to happen. Rest up - next week is the bye (buy?).

Judie,
That photo is from last year...I already had a shot of that ensemble on file so there was no need to take another one. But rest assured, I'll wear these socks until they disintegrate.

DG,
I couldn't believe Heath dropped such an easy catch. He made up for it later though. And boy, didn't Antonio Brown have a good game? Good day at the sports bar.

Good Day for our Side! Your MoJO is denfinitely working in many ways.
Socks Rock! (or is it Rocks Sock...) o dear, another brain dropping

Bryan is the football-minded one in our duo, so I won't pretend to know what the hell I'm talking about here. But I do admire your loyalty to your team and hope that this weekend was a little better for your boys, and a little worse for the Ratbirds.

Mary Ann
Definitely a good day at the sports bar. Stayed right through the first half of the Rats game. Was having entirely too much fun.

Brandon (Beer)
I appreciate your indulgence, and rest assured, there is no football test at the end.

Because I realize that not everyone is into sports, when I write about it I try not to focus on the hard-core game play. I concentrate instead on my reactions to the games and my warped sense of mojo and rituals. And laughing at my “enemies.”

Do your Ratbird-loving coworkers/friends ever bemoan the fact that their team gets up for the Steelers, but then ends up utterly exhausting themselves so they completely suck the following game? I am not complaining, though. It certainly made Steeler Sunday that much sweeter.

And how about Willie Gay? If he had played like that last week, the Steelers surely would have won. Hopefully the good Willie Gay will show up for the rest of the season.

Facie,
Constantly. It delights me that they can't be happy in all facets. They beat us, then lose to 3 tomato cans and go down to the wire with a 4th. For all their celebrating over their tiebreaker, I just keep telling them that it only matters if there's a tie. We could still win the division outright.

Good to see Willie Gay step up. But what the hell was up with Troy on that TD pass? Is it me, or did it look like he could have just reached up and batted it away... if he cared to?