Famed heavyweight boxer “Smokin’” Joe Frazier died this week of liver cancer.  Frazier was best known for his trilogy of fights with Muhammad Ali in the early 70s, back when boxing was still relevant to our society.
I was a boy in 4th grade during the first Ali/Frazier fight.  It was a divisive time and our playground was divided as well, between Ali and Frazier camps.  I didn’t know much about boxing (or anything, really) at that age, but I knew that Ali was a loudmouth.  I hated loudmouthed braggarts, so I burrowed squarely into the Frazier camp.
I remember one kid in class bet everybody he could that Ali would win the fight.  When Frazier knocked Ali down in the 15th and won the decision, the kid’s mom wouldn’t let him pay off his bets.  (If that had been MY kid, I’d have made sure he not only paid his bets, but worked to earn the money first.  That’ll teach the little shit not to gamble, more efficiently than any lecture.)
Like I mentioned, back then boxing mattered.  It was on TV all the time, on Wide World of Sports, the Olympics, or whatever.  Boxing had yet to become splintered into the alphabet soup factions like it is now, so everyone knew who the Champ was, and the only boxers that mattered were the heavyweights.
Still, the big heavyweight fights were only live on pay-per-view in movie theaters.  Some people with short-wave radios could get the big fights from far-off lands.  Best my family could do was watch when the fight would be replayed on TV, a week or two later.  So it was hard for me, as a little pre-internet/cable TV kid to follow everything.  But I always liked Smokin’ Joe, for his quiet demeanor, big left hook and general indestructibility.
Quick note: I used to hate Ali.  Like I said, he was too loud for my taste.  I didn’t like how he made fun of Frazier before their third fight, the famous Thrilla in Manilla.  No matter who he fought, I rooted hard against him.  I’ll never forget being the only one awake in the house on the night he lost to 1976 Olympian Leon Spinks.  When Ali lost the decision, I danced around the house like a madman, only without making a sound, lest I wake up Dad.  It was the first time I’d ever watched one of his fights live and saw him lose.
It wasn’t until many years later that I began to appreciate Ali for the wars he fought, both socially and in the ring.  I highly recommend the movie documentary, “When We Were Kings,” which covered the Ali/Foreman fight in Zaire.  I had no idea Ali was such an underdog.  His own people thought that he might actually get seriously injured or killed against Big George.  After all, Foreman had absolutely destroyed Frazier, knocking him down seven times in one fight.  (That’s the fight from which this post’s title is taken; Howard Cosell’s refrain of “Down goes Frazier!  Down goes Frazier!)  Ali beat Foreman through sheer guile and psychological warfare.  (OK, and a vicious right hook.)
But Ali and Frazier were polar opposites.  Ali was flashy where Frazier was stoic.  Ali danced and jabbed his was around the ring where Frazier plodded forward and threw devastating hooks to the body.  Ali didn’t let you hit him, where Frazier didn’t care how many shots he had to take for him to get inside and unleash his own bombs. 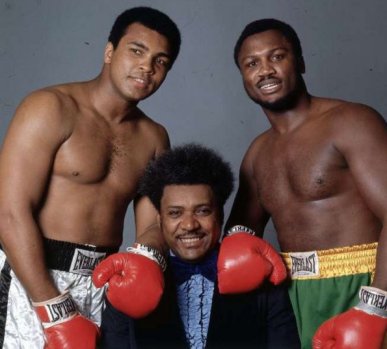 Ali and Frazier surround reptilian promoter, Don King, who is one of the reasons boxing is now so fragmented and widely disrespected.
The Thrilla in Manilla was the best fight I ever saw (later on replay, of course.)  The pre-fight hype was brutal.  Ali mocked Frazier for being slow, ugly, a gorilla and an Uncle Tom.  That’s one thing for which I can’t forgive Ali.  Joe had lent the guy money back when he couldn’t get a fight, and now he comes back with personal insults that went far beyond just promoting the gate.
Joe buried all that resentment and turned it into fury.  The opening rounds went to Ali, as he danced around the charging Frazier and rained jabs onto his skull.  But in the middle rounds, Frazier began to find the mark as he bombarded Ali’s midsection with brutal hooks.  Practically punched his lungs out.
In a testament to his greatness, Ali sucked it up in the late rounds and unleashed his own bombs into Fraziers eyes.  But every time you saw Ali go to sit in his corner, he looked like a battered man, like death warmed over.
Joe looked worse though.  Ali had closed his left eye; it was swollen down to a slit.  Before the 15th round, Frazier’s manager threw in the towel.  Joe would not be able to see or stop Ali’s right.  To send him back out would practically invite permanent blindness.  Joe’s heart was willing, but cooler heads prevailed.
It was practically a game of chicken though.  There was a distinct possibility that Ali might not have gotten up either.  In fact, he barely got up to “celebrate” his win; he was back on his stool almost immediately.  He actually fainted in the ring.
It was through this war that they won each other’s respect.  Ali went for a stay in the hospital after the fight.  He said that it was “the closest to dying I’ve ever been.”  He also said that “Joe Frazier is the greatest fighter in the world… next to me… That’s one helluva man, and God bless him.”
I read that Joe went out to the clubs afterwards.  Post-fight, Joe said, “I hit him with body shots that should have brought down cities.”  But Ali kept coming, in that fight and in too many that followed.
Ali should have retired after he regained his title from Spinks.  Instead, he hung on way too long and got pummeled in his last fights.  The Parkinson’s he has now is the down-side of being brave enough (or foolish enough) to keep wading into those shots.
Joe kept his health fairly well, considering his profession (and the smoking habit for which he was nicknamed.)  But time catches up to even the most fearless of warriors.
It’s funny; on the night Frazier passed, I was flipping channels and tripped over the last 20 minutes of Rocky.  Remember that Frazier had a cameo in the movie: he came out to be introduced to the crowd before the big Rocky/Apollo fight.
I remember reading in a book that Stallone wrote about the movie, that they had Joe waiting in the dressing room while they filmed some other shots.  And they forgot about him.  They practically had to draw straws to pick who had to go back and get him, after the hours he spent in there, alone.
But if you remember the movie, Joe came out to graciously wave to the crowd and jaw with the actor-fighters.  To do otherwise wouldn’t have been his style.
Rest in peace, Joe.  You earned it.  And hey, maybe you can haunt your old foe.
Just like old times.
Posted by bluzdude at 6:35 PM

Email ThisBlogThis!Share to TwitterShare to FacebookShare to Pinterest
Labels: R.I.P.