It's All Greek to Me

Can you be nostalgic when you’re only in 3rd grade?

I remember back when we lived in the Chicago suburbs and I was but a wee lad of 7 or 8, my parents got this Greatest Hits album by Herb Alpert and the Tijuana Brass.  This was the late sixties and even then, Herb and the TJB weren’t exactly “hip.”  But their brassy instrumentals were catchy and fun, for a household with 3 little kids.

I mean, we couldn’t play the soundtrack to “Hair” all the time, could we? 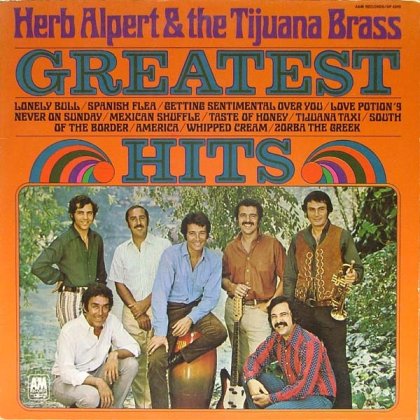 Tell me these guys don’t look like they should be playing in a crappy Holiday Inn lounge somewhere…  And I could swear that the 2nd standing guy from the left was Dick Martin from Laugh In.

Every so often, mom or dad would put on the Herb Alpert and we would carry on and dance around the dining room table.  I remember at the time, feeling nostalgic about those tunes, because I remembered them from when I was an even younger boy.

When we still lived in Pittsburgh, we had this big basement with a bar.  My folks would have the occasional New Years Eve party back then, which obviously set the precedent for the NYE parties we had out in The Barn, 15 years later.

I still remember the ritual of Dad sweeping out the concrete basement floor and wiping off the bar.  I used to love those parties because of all the fun… the soft drinks that we were allowed to have, the snacks, and the music.  My brother and I were allowed to stay up for a little later than usual and enjoy the first hours of the party. 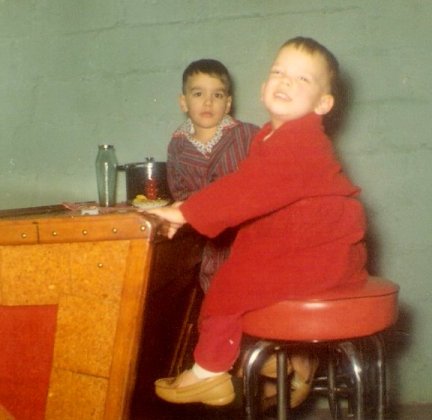 My parents would fire up the record player down there and play 45’s, Herb Alpert’s among them.  I used to be fascinated by the sight of the records spinning round and round.

OK, I was a very easily amused kid.  We didn’t have Playstations, we had radio stations… AM radio stations at that.  But I just always thought that records were cool to play with, from the time I was, like, 3.  Anyway, I’m drifting…

The thing is; I could remember those songs from the time I was a very small boy, so that even hearing them in elementary school made me wax nostalgic.

My favorite of the lot, hands down, was “Zorba the Greek.”  It was one tune that was nothing like any of the others, most of which had a Latin vibe.  “Zorba” was anarchy!  It was fast-paced, featuring a bouzouki player, Herb’s lightning-lipped trumpet, and lots of hooting and hollering and “Ayiiiiiii-yip-yip-yip!”  It was a four and a half minute party!


Even as a kid, I could picture a loud, wild affair with sunshine, brilliant colors and lots of people dancing around with their arms in the air.  Check this out; you’ll see what I mean.
You needn’t even pay attention to the visuals; (some album stills, some dancing video), the music says it all.  You can skip the slow part in the middle, but be sure to catch where it starts to speed up again at the 2:45 mark.

My brother used to have his special moves for this song as well, (again, when he was very young.)  During the slow part, he’d lay face-down on the couch, and then as the music gradually picked up speed, he’d shake his butt from side to side in time with the beat, faster and faster until he’s practically throw himself off the couch.  Used to make me laugh myself silly.

When we finally got around to growing up and throwing our own parties out in The Barn, especially in our first, small, neighborhood Barn Parties, we found a home for Zorba there too.  None of our friends had heard any of this kind of things before but they caught the same vibe as we did.  In fact, we invented our own dance to it.  Granted, it wasn’t nearly as good as the people you see in the video…  Ours was more like a long Conga Line, only with more hormones… three ass-shakes, then a pelvic thrust on every kettle-drum beat.  Call it a Bunny Hop for prospective pole dancers.

You know, maybe if the Greeks didn’t make such catchy music, their economy wouldn’t be in the toilet.  It’s hard to hold down a steady job when you’re always dancing around with your arms in the air.  And how could you ever hold a business meeting?

“And now, Cristos will talk about our 4th quarter projections.”

“Thanks, Stavros.”
[Climbs up on table, begins dancing…] “Ayiiiiiii-yip-yip-yip!”

[Everyone links arms and dances around the boardroom table…] “Woooooooo!”

Marginally-related thought: If I were Greek, I think I’d like to be named “Cheerios,” or if I was having a bad day, “Belicos.”

I have Zorba on my MP3 player, so it comes up occasionally on my way to or from work.  It’s kind of a “WTF” moment when it follows something like AC/DC or Metallica.  Or Abba.  Such is the peril of “shuffle mode.”

But it never fails to make me smile and look for the party.  And want to shake my butt and put my arms in the air.  It’s impossible to have a bad day with this tune running through your head.

Ayiiiiiii-yip-yip-yip!
Posted by bluzdude at 9:25 PM

You are the cutest little five year old out there! Of course, I can say that because my oldest is only 4. But seriously, you're so cute!!!

I know what you mean about music being nostalgic. Mom always had something on which mostly consisted of Fleetwood Mac, Aerosmith, Queen, and the Moody Blues. I still can't hear Tusk without wanting to bang on the table.

If I threw my arms in the air and shook my butt, Rod would call 911.

I LOVED the TJB! Your family certainly had wonderful parties. In fact, you have a wonderful family! I know you're thankful for that, not just tomorrow, but every single day.

I bet your mom and dad threw one swingin' shindig.

And Cassie's right, you really were the cutest kindergartner on the planet.

Not to mention how hard it is in business meetings when the Greeks have tassels on their knees.

Dude, one of my earliest music memories is my grandparents' home 8-track player. The only decent 8-track they had was Herb Alpert. Don't think it was a greatest hits album but it definitely had Lonely Bull on it. So frustrating that you couldn't play individual songs on 8-tracks. Had to listen to the various programs.

Herb was a music mogul. He was the "A" in A&M Records.

Love Herb Alpert almost as much as watching Anthony Quinn dance as Zorba. AIIIIII YIP YIP, indeed. Pass the spanokopita.
When you were just a tiny Tad, not even walking yet, I left you on the living room floor for about five minutes. I came back to find you sitting amid all the albums which you had somehow dislodged from the record cabinet. Prophetic, no?!

I'm dying to listen to this song but am out in public!

My favourite part of this post is the mention of soft drinks as a treat. Namely that you call them soft drinks and also that I drink about three of them a day without even thinking about what a lucky, rich American I am.

Cassie
You do realize that I’m the one in the back, right? Your Claire is cuter than I was at any age.

Funny you mention “Tusk.” I’ve been mentally compiling a list of songs I want to present to my nephew and on the walk in to work today, I was thinking about that one, and what I’d tell him about it. I remember one time when I was in school, my alarm went off at 6, when it was still dark, and Tusk was playing. In my just-woke-up haze, I thought I was in a jungle somewhere. It was creepy. But I love that part when the USC Marching Band comes in. Killer!

But I think I’ll skip the part where the term “tusk” was Mick Fleetwood’s euphemism for his junk.

Judie
I bet Rod would enjoy the view, first.

I always LOVED the family parties. We didn’t throw that many of them ourselves (until we acquired The Barn) but the rest of the family… whoa. I swear my Grandpa used to keep taking new jobs, just so he could have another Retirement Party soon after.

Mrs. Bachelor Girl,
Seriously, I’m the one by the wall, being upstaged by my hambone little brother.

Carpetbagger,
We never had 8-tracks, but I had friends that did and I HATED them for that very reason. You couldn’t just fast-forward to the song you wanted, you had to let the thing play out. It especially sucked on double-live albums. For Pete’s sake, I don’t need to hear the entire 2 hours of An Evening With John Denver… just play me Thank God I’m a Country Boy, for cryin’ out loud. (What? It was 1974.)

And yes, I’m hip to ol’ Herb… a musician who became a big music mogul, forming A&M records with Jerry Moss. He was one guy who never had to be worried about getting dropped from the record label.

Mary Ann,
I must have been programmed for music appreciation from birth.

I also remember teasing you and Dad about the awful, scratched up condition of some of your albums. You laughed and said, “how do you think they GOT that way?”

Katie,
You’ll love the tune, when you get a chance to hear it.

Yes, soft drinks were definitely a treat. We never had them in our house… only Dad’s Fresca when he was on a diet. We had to go to the grandparents house to get soft drinks.

And I called them soft drinks because I have a bunch of readers that call it “soda” and a bunch that call it “pop.” I opted for none of the above.

These days, Diet Coke is my drink of choice, but I’ve cut down from 4 times a day to 2. But breakfast is still one of them.

Diet Mountain Dew is my morning coffee. How can you drink Diet Coke when Coke Zero exists?!

I think you should go with "soda pop". It's the most ridiculous of all the "soft drink" variations.

Katie (ettible),
I'm too used to the "drier" taste of Diet Coke. Been drinking it for 28 years. Full-flavored Coke would give me the shiver-snivers.

Ok, I totally don't mean to age you by saying this, but my mom and her siblings still tell stories about by grandfather dancing to Tijuana Taxi with that dang horn noise.

Also, diet drinks rot your brain. Why are they so delicious?

Jessica,
Don't worry about it. I know for a fact that I'm older than Cassie's mom and you two are about the same age, so it stands to reason that your mom is in the same ballpark as I am.

I used to like Tijuana Taxi too, because of that horn. In fact, I even had it on a tape for the car, so whenever the horn part came, I'd beep my little Honda roadrunner-sounding horn at the same time, and laugh my ass off. Meeep! (Remember... "easily amused.")