In a prior job with my current company, my primary mission was to write procedures to document our operations.  For this, I went to some training sessions to learn to use the format that our company preferred.
Once there were a number of us trained, part of the ongoing process was to meet on weekly conference calls and present our procedures to the group, for review.  Not only could the group help tighten up our presentations; they could look for areas where the described procedure might conflict with those of another department.
I always looked forward to these calls, not only as an asset to enhance my writing skills, but as an audience for my unusual sense of humor.  See, I didn’t have a blog yet, so I had to take advantage of any captive audience I could find.
One of my favorite things to do was to slip little jokes into my procedures.  Stuff like this, (and I’m paraphrasing the details):
If the review is approved within 3 days:
I liked to see who was paying attention and actually reading my stuff.  Another favorite thing was to produce interesting acronyms for procedures or recurring documents.  My influence paid off later when someone else wrote to the group about wanting to use the acronym BARF for a form.  (I don’t remember what it stood for, but it was completely accurate.)  The email said something like, “Please let me use BARF… Bluz would do it…”
I was so honored.  I wrote back that indeed I would do it; if for no other reason that I could hear people say things like:
“Would you please hand me the BARF?”
“Have you seen my BARF?”
“Who left that BARF on my desk?”
My finest moment bubbled up organically, like the best ones do.  I was presenting a very detailed procedure to the group and my bit ended with filing the paperwork in the appropriate file cabinet.  One of the (other) wise guys on the call piped up, “And then what do you do?”
I responded, “I don’t know, I haven’t written the ‘Returning to Your Seat’ procedure yet.”
[Ding!]
The entire plan occurred to me right then.  I would write a “Returning to Your Seat” procedure and quietly slip it into the queue for review.  I’d write it with the exact specifications and attention to detail that we used for all our procedures, right down to the hyperlinks and references to other procedures.  I’d let it go through the entire approval routine, just to see who was paying attention.
Unfortunately, our group leader was paying attention.  The two of us had always gotten along well and she totally understood me.  In fact, she said she was using some of my work as examples in subsequent training sessions, even the goofy stuff.  But with this one, she felt duty-bound to fish it out of the queue so to not waste anyone’s time. She did, however, forward it to a number of others in the group whom she felt would appreciate the joke.
So without further ado, may I present my very own: Returning to Your Seat procedure!
Returning To Your Seat
The Mojo Boogie
The Steelers played this week’s game last Thursday night, which presented a dilemma for me.  The game was scheduled directly opposite the Penguins game against their mortal enemies, the Philadelphia Flyers.  The game times were staggered, with the Pens coming on at 7 and the Steelers kicking off at 8:30.
I decided to DVR the Steelers game.  The Pens game would be half over before the Steelers even started, so I figured I could check in during the 2nd period break and during commercials, and bail completely in case of a blowout.  Then I could zap the commercials during the football game and eventually catch up to the live action.
My viewing plan worked out well, even thought the Pens game went down to the wire.  My real problem was with mojo apparel.  Do I wear the hockey jersey or the football ensemble?
My solution was to do both.  I wore my Steelers jersey underneath the Pens jersey and whenever I flipped over to watch the football, I pulled up the Pens jersey.  I didn’t have the energy to remove it completely but figured that just exposing the numbers would suffice.
The Steelers were wearing their throwback uniforms so I went with one of mine.  The previous time they wore the throwbacks, I wore my James Harrison throwback and they lost.  So this time I opted for my Heath Miller version.  Here is the complete array: 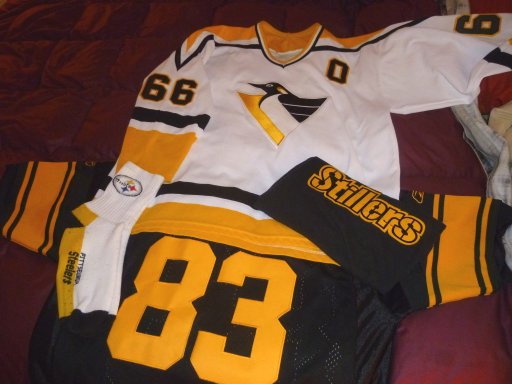 90’s era Mario Lemieux jersey, over Heath Miller throwback, over “Stillers” tee, with Steelers socks.  Not pictured: AC/DC flannel pants.  I needed something neutral for my bottom half.  If I owned any Penguins socks, I’d have worn one of each.
The Steelers won, 14-3, in a game that seemed closer.  My boys had a couple of injuries though… Both QB Ben Roethlisberger and Center Maurkice Pouncey suffered high ankle sprains, although Big Ben gutted it out and hobbled through the 2nd half on one foot.  Also, both Heath Miller and Hines Ward had crucial fumbles in the red zone, which killed drives.  I'm not sure whether my wearing the Miller jersey affected the fumble (bad) or saw that we pulled the game out at the wire (good).  Next game is a Monday Night affair in San Francisco so I'll have to pull out some MNF research.
Posted by bluzdude at 12:20 PM