It’s hard to determine what is actually “news” any more.  In the past, it was pretty easy.  You watched TV at 6:00 and someone told you what happened that day, then you ate dinner.  Maybe you read the newspaper in the morning to see what happened overnight.  It was pretty straightforward.
It’s much more complicated today.  We have unlimited access to stuff that happens every day, but we seem to know and understand much less.  A lot of it has to do with modern media.  Where the TV news used to primarily present reports of stuff that happened, now we have to consider what the TV news broadcaster is trying to tell us about the stuff that happened.  It’s a sad state that on TV news, what is reported is molded to make you think a certain way about the issue at hand.
Always in the back of our minds, we have to consider, “What is the newscaster’s angle?  Do they have a philosophical dog in the fight?  Is there something they’re leaving out of the story?  Are they using emotionally loaded words or images?”
It’s a lot of work to apply all those filters.  So it’s no surprise that Americans pay so much attention to the fluffier stories.  It follows, then, that the newscarriers seek to provide us with more of what we really want: news as ‘empty calories.’
“What happened with Kim Kardashian’s marriage?  How is Lindsey Lohan doing with her community service?  When will her Playboy spread come out?  What’s going on with that ‘Real Housewife of Upper Sandusky’?  Didn’t her husband shoot up a school or something?  Which congressman has his willie out this week?”
Internet news is no better.  There are eleventy-hillion jillion sites that carry “news” and they’re even more fractioned and factioned than TV, with zero oversight.  Gossip and rumor are reported as fact.  Opinions and ruminations are reported as fact.  Questions are designed to lead you to concluding that the answer you come up with is a fact.  Other sites research and verify the facts and are called partisan hacks, for their trouble.
So much news, yet no one knows what’s going on.
It is under these murky circumstances that I jumped on an email my mother sent me, which contained the Pew Research Center News Quiz.  It was a simple 13-question survey designed to poll how much we know about current events and newsmakers.
In a nutshell, as a country we don’t know diddley-squat.  Only 8% of all test takers got all 13 questions correct.  Now I’m far too modest to list my score, so you’ll just have to 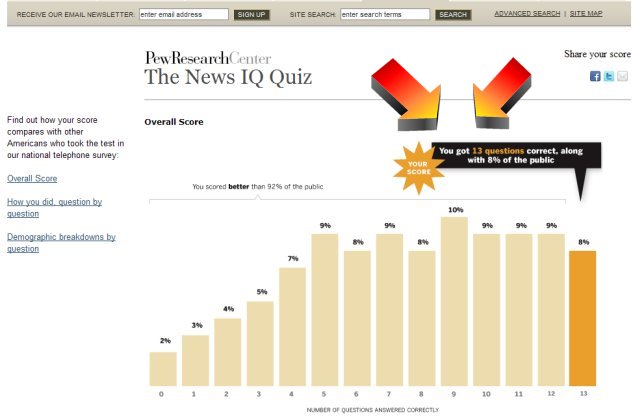 Oops… how’d that get in there?  OK, I admit it: I aced it.  So now let’s see how YOU do.  Here’s the link.  It took me about 5 minutes to do the test.  Take it yourself and then you’ll know how you stack up.  Put your score in Comments, if you dare.  I want to see how many of you can join me in lording our wisdom over everyone else.
If you take the test, you’ll see that they also give you a statistical breakdown by demographic.  One thing that really surprised me was that on every question, men got the answer right more often than women.  (And remember, it’s by percentage, not raw numbers, because you’d figure that more men took the test.)
Perhaps women just have too many more things to keep track of than men do.  If you think about it, men have a lot more free space in their heads to store things if they don’t have to worry about crafts, home décor, recipes, horoscopes or their kids’ schedules.  Of course men would have to subtract the room taken up by fantasy football stats, batting averages and golf swing mechanics.
I happen to think that you, as one of my readers, are pretty much on top of things.  I’m sure you’re only visiting me here after you’ve done your day’s trawling for the news of the day.  Believe me; I’m pleased to be your dessert; the cherry on top of your sundae, if you will! 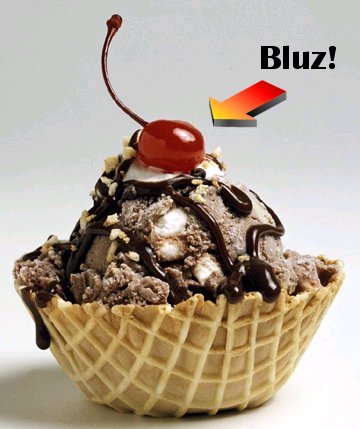 Aw, crap, now I’m all hungry.
Anyway, let’s see what you’ve got… if you dare.  And should you miss any questions, and we ever disagree on something later, I promise not to hold it over you.  Much…
Note: If you’re going to take the test, please do so before reading comments, because there’s some discussion going on about the answers.  No fair cheating!
Posted by bluzdude at 6:40 PM

I scored 7 out of 13. There is a lot of political figures in there...my weakness!

Workingdan,
I'll admit that I hit on a couple of educated guesses. Q1, first off... I had to go by process of elimination. My hardest dilemma was the one that was the symbol. I thought I had it right, but couldn't be sure because I didn't recognize the one in Arabic. But it worked out.

That was fun! I Promptly enjoyed it! Oh and yes, I aced it as well. I sped through it in like a minute to be honest. If only answering those questions got me a full time job. Oh well, still had fun though.

I got 8. EIGHT. I missed the country that's close to default, the prime minister of GB (who really cares?) but the others I missed were because I really didn't pay attention as closely as I should have.

At least I knew all my countries!!!

I missed 3. Both geography questions. Shame on me I know. And I guess I need to pay better attention to the symbol of Islam. I did get all the political ones correct and I didn't have to guess on them.

I got them all, so now I guess I'm ready to be on Jay Leno's "Jaywalking." I am always stunned to see how many college graduates don't have a clue about "things you should have learned in school." Maybe they're watching too much reality t.v. (see my "E" post from last Thursday)

Shouldn't that sundae have bacon on it?

I got them all correct --the seond time. You never said we couldn't take the test multiple times. Although, the stuff I didn't think I'd get right, I did, and questions I though "oh, this is silly" I got, well, right the second time!

Aced it. I was a little worried about being right on the number of Afghan casualties, but it was right. I think Cassie has a point. It's not that women don't know these things as well as men, it's that they really don't care about knowing them as much as men... generally speaking of course.

Ask men what color their wife's outfit was yesterday, and most men would be up Shit Creek pretty fast.

Justin
Yay! Welcome to the club! And if I were an employer, questions like this would be on the interview.

Cassie,
I knew it. Who do you think I was talking about when I said that I thought the women’s lower scores might be due to crafts, home décor, recipes and kids’ schedules?

I had to pause at England’s PM too… I mean, they keep changing so quickly, at least in comparison to when Margaret Thatcher and Tony Blair seemed to be in power forever.

Mad Mind,
I think that’s one of our biggest weaknesses as Americans… we’re horrible at geography, especially the geography that lies outside of our borders. (And we’re not that good at our own, either.)

The Islam symbol one is practically a trick question… it’s a natural inclination to select one that’s in Arabic.

Judie,
Geez, I totally should have mentioned Jay-Walking. I can’t believe that there are actually people that walk around out there that can’t answer those questions. But we have to remember that we don’t see the raw footage. What I want to know is the ratio of competent people to idiots. Does Jay have to interview dozens and dozens of people to find these morons, or does he find them in about ten minutes?

Oh, and congratulations. Welcome to the club.

DG,
I did think about trying to find a picture of the bacon sundae, but A) I wanted one with a cherry on top, and B) I was trying to hurry up and get the post in before the Penguins game came on and just Googling a sundae was easier.

Now, shame on you for trying to squeeze in on your second attempt. Leave it to the lawyer to try to look for loopholes.

Carpetbagger,
Yeah, the Afghan casualties was tricky, but you just had to reason it out. I knew we’ve had around 5000 casualties all together between the Afgan and Iraq wars; the trick was determining the split. There was only one option that made any sense, in that respect.

I totally concede the male/female point about all the things of which the ladies keep track. (And I don’t even know what I wore yesterday. HOWEVER, if women have the ability to mentally record, catalog and retrieve every male shortcoming, mis-step, perceived slight and oversight dating back to the onset of a relationship, (and in my experience, it’s something they all can do), there should be room in there for the location of Israel as well.

I got 11. And here I was thinking Great Britain was in debt up to their eyeballs. All things considered, I'm pretty proud of my score. It's a good thing that I half listen to the news in the evenings and listen to my husband ranting about it before I go to sleep.

Jessica,
Great Britain isn't in great shape, but Greece is swirling down the toilet.

11 is a great score for someone with a little baby at home. Sarah is like 'extra credit.'

Aced it. I'm weak on geography and had to guess on Brazil but I got it right. Also the symbol for Islam almost tripped me up. Bernake's photo is constantly on the websites I visit -- you know, the liberal left wing CNN, NYT, Huffington Post, MSNBC sites. Thanks for posting the link to the survey.

I got a 12! Sadly, I don't think I can locate too many countries in the Middle East, and fortunately that was the only one like that.

But you are right. We don't know (too much) jack, and there is an abundance of crap out there, although you did not say it quite that way. :-)

Deb,
Congrats on being my second female reader to ace the test!

I only got the Islam logo one because I recently saw blurbs about the Red Cross and “Red Crescent”, which was operating in Turkey, and considered how wise it was to have an alternative name for a relief organization that doesn’t evoke the Crusades.

I was almost thrown by the Bernake photo because I didn’t think it was a very good likeness. But by process of elimination, it came down to the Fed Chair or Dept. of Education director and I didn’t think the latter was very newsworthy.

Facie,
Congrats none the less. That was another one that ‘process of elimination helped. The ones that weren’t the right answer were all much larger countries.