Last night was the opening salvo to what is going to be a furious flurry of activity for me.  I’ve got a whole fistful of summer events, all packed into the next 2 weeks.

First, the Pittsburgh Pirates are in town to play the Orioles this week.  I went to one game last night (more on that in a bit) and will be at another on Thursday.  Also, I’m going to see my nephew playing in his little league championship game tonight.  Otherwise, I would have used tonight to pack, because on Friday, I’m flying out to make my annual pilgrimage to NW Ohio, to hang out with my (now well-documented) buddies (The VP of Hell No and the Chairman of Fuck Off).

On the Tuesday and Wednesday, we’ve booked a 2-day fishing trip on Lake Erie.  Then I fly back to Baltimore on Friday, then turn around and drive to Pittsburgh on Saturday, to have dinner with that collection of ‘Burgh-blogging whack jobs who I call ‘my friends.’  I got a room at a Doubletree, downtown, for Saturday and Sunday.

On Sunday, we take in another Pirates game at PNC Park, which may be preceded by a trip to Rivers Casino.  Then before driving home on Monday, I plan to stop by and see my Grandpa for a while, and maybe go out for a couple of monster fish sandwiches.

Normally, I would have spaced all this stuff out over the course of the summer, but there were too many details that couldn’t really be moved.  I was already committed to a couple of the ballgames, and the dinner in Pittsburgh was cemented by the visit of our friend Jessica, of Leelafish, who is coming in all the way from Louisiana.  Then my buddy booked the fishing trip in the middle of it all, resulting in this period of condensed merriment.

I know I shouldn’t be complaining about his overabundance of fun.  I just don’t know what I’m going to do with myself in July and August.  But for now, let’s talk about last night.  (Baseball fan or not, you need to read this story.  Trust me.)

I was sure that the game Tuesday was going to be a CF of epic proportions.  All week I’d been eying the reports of rain for the entire day.  All day at the office, I watched out my window to see it alternate between drizzling and pouring.  I scoured the weather sites for up to the minute information or changes.  None came.

See, this was the one game where I “treated” myself.  I was going alone, and when I looked for seats online, I found an aisle seat in the front row of the Club Level section, along the 3rd base line.  I figured, “Why not get a good ticket for a change?  It’s your Pirates!”

That’s how I came to drop $70 on a single baseball ticket.  So naturally, it was going to rain all night.

Note: If you don’t know, Club Level is the small deck between the lower bowl and upper deck. It has its own entrance that is ticket-checked by an usher before they let you in.  The concourse is an enclosed hallway like you might find in a hotel or something.  As you walk the concourse, there are alternating doors, which let you into either a company suite, or the outdoor seats (where I was). 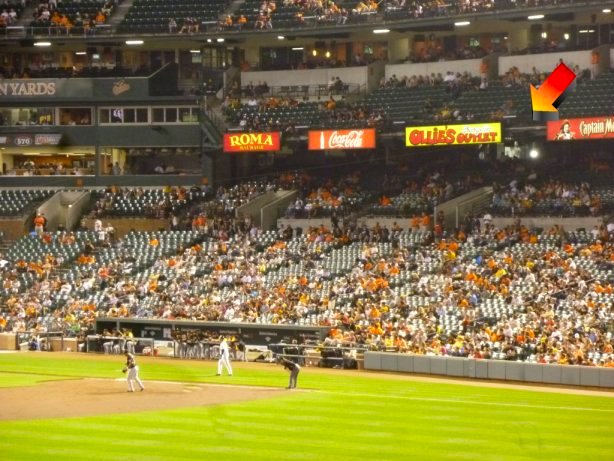 This was my seat, right here.

I prepared like I was going to a football game.  I had my game jersey and hat packed, and brought my plastic poncho, so the Pirates jersey could still be seen.  Plus, with club seating, you always have the option of ducking back into the private concourse and watching the game in a lounge, on TV.  So I felt like I was covered.

It was still raining when I left my office and started walking down to Camden Yards.  About halfway there, I spotted a group of 5 young guys, all wearing Pirates t-shirts.  One of them saw me and yelled, “Let’s Go Bucs!”

We met up and the corner and one of them asked me which way the ballpark was, so I said, “I’m heading there right now, just follow me.”

The guys had just driven in from Pittsburgh and were there to see a couple games.  So as we walked along, I told them a bit about what to expect from Camden Yards, and suggested some things to see.  They were going to buy their tickets at the box office, so I pointed that out as we approached.  I also suggested that they have a couple beers on the outside, on the cheap.  They were already planning on doing that.

“Where’s ‘Pickles?’” one of them asked me.  “Pickles” is one of the places in the little strip of bars across from the Yard, where I go before each game.  The guys had been told to go there.

I said, “Follow me!” as I led them toward their new destination.  I was quickly becoming a kind of Pittsburgh Pied Piper of drunkards.

We all got some grub from the food stands out front, hung out in front of The Bullpen (my regular spot) and drank the “Cheap Ass Beer” that they advertise (2 for $5 cans).  As the evening went on, we became a kind of magnet for other passing Pirates fans.

It’s so cool and so typically Pittsburgh.  If you’re anywhere in the world and a ‘Burgher sees you wearing a Pittsburgh shirt, that’s all it takes to strike up a conversation and hang out.

Eventually, after an hour or so of yakking about places to sit, things to see, and ways to smuggle beer inside, we went our separate ways.  The guys went to get their tickets and I headed for the rarified air of the Club Level.

All my worrying about the rain was for naught.  It had stopped about 5:45 and never really started again, at least not at the ballpark.  It proved to be a very pleasant evening for baseball.  Still, the daylong threat of rain really killed the crowd.  Attendance was announced at about 15,600, but there must have been a ton of no-shows.  There were only about 15 people in my whole section.  And naturally, I was seated directly beside two of them, an older couple that had come down from New Jersey to see the series.  It was the lady that was the major baseball fan; her husband was bringing her to the game as a treat.

It started out a little iffy.  When I came in, the guy went, “Oh geez, we got a Pittsburgh fan here…”

I went to great pains to say that I root for the Orioles whole-heartedly, against every team in the league, except “this one,” [tapping the Pirates logo on my chest].

I try to be overly polite when I’m wearing Pittsburgh gear in a city that’s not Pittsburgh.  I feel like I’m an ambassador for the ‘Burgh, so I try to be extra nice to my seatmates, ushers, vendors and everyone else.  In Baltimore, it kind of blows their mind because given the Steelers/Ratbirds rivalry; they expect us all to be jerks.

If I were to act surly or mean, they’d just go, “Yeah, typical Pittsburgh A-hole.”  So I try to behave in ways that make them think, “I guess those guys aren’t so bad after all.”

Anyway, the view from my seat was brilliant and totally worth the cash. 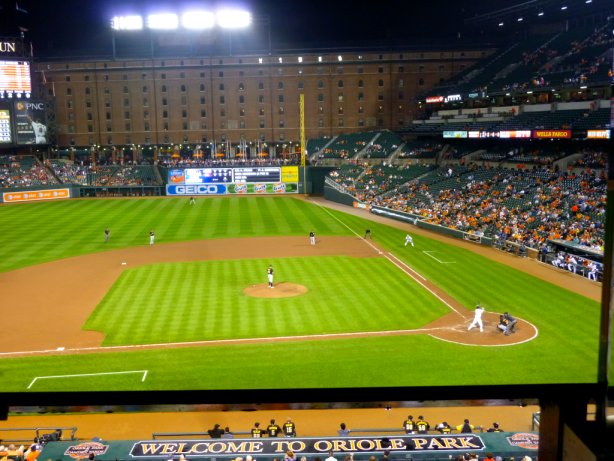 One foul ball came our way… it landed about 5 seats to my right.  One guy, who was sitting there with his family, got his hands on it, but bobbled it.  Meanwhile, some other guy had run down from about three rows back and scooped up the loose ball on the rebound.  First dude totally should have thrown the guy over the rail.  An usher came down to make sure his hands were OK.  Maybe they have a manicure station or something on the Club Level.  If you were in the bleachers, you could get clonked on the head and I don’t think anyone on staff would even notice, unless you fell onto the field.  (In which case, they’d taze you for good measure, then drag you off.)

This game was the first for Orioles 2nd baseman Brian Roberts, since May of 2011. He had been sidelined with concussions since then.  He got a well-deserved standing-O on his first at-bat, in which I fully participated.  Again, I like to shake up the expectations.  And he did OK, too… went 3 for 4 plus an RBI sacrifice fly.  (The Orioles won 8-6 but it wasn’t really that close.  The O’s jumped out early and the Bucs chipped away, but couldn’t close the gap.)

Around the fifth inning, I had to go take a leak.  I ran back into the concourse hallways and scoured for a restroom sign.  Finally, I found one and plunged through the first door I got to.

Funny thing about these club level men’s rooms: no urinals.  Maybe these high-class sections are too high-brow for urinals.  I had a good look around anyway, but all I could find were toilets in stalls.  One in the middle was occupied, which bugged me, so I had to duck into an adjoining stall.  Finally, I achieved the sweet release of a good pee.

Once I got going, I started taking a closer look around.  I saw the TP dispenser on the left, but what was that metal box on the other side?  Then it dawned on me.

That provided a dilemma: how should I pee, to best remain undetected?  At first I decided that I should make less noise, so I aimed at the porcelain over the water’s edge.  But then I realized that women aren’t usually so directional, so I went back to going straight into the water.  I further realized that moving the stream all around the bowl was another give-away, but by then there was nothing left for me to do, other than hide in the stall until my neighbor got outta Dodge.

Luckily for me, I made it out unseen.  No one even saw me come out the door.  Good thing the crowd was so sparse last night.  Otherwise, there would have been a whole slew of people there walking around going, “Damned Pittsburgh idiots, always using the wrong bathrooms…”

Director’s DVD Commentary: With my upcoming hectic schedule, I haven’t fully worked out when I’m going to post over the coming weeks.  It shouldn’t be much of a problem because it seems to be “graveyard” season for blogs right now.

I’m usually able to drop a post or two from my buddy’s house so I expect I’ll do the same.  Maybe I’ll schedule a “rerun” post during my Pittsburgh weekend… something from deep in the archives.  Either way, stick around!  I’m sure these adventures are going to generate some killer material.
Posted by bluzdude at 9:28 PM