A Week of Crazy Pt 3

I apologize for the uncharacteristic gap between this and the last post… I’ve been kinda busy.  Just got back yesterday from my weekend trip to Pittsburgh.  I’ve got plenty to write about that, but first I want to put a bow on the Ohio portion of my vacation.

What I want to do is to briefly go over the last days and then fill in some details that I forgot to put into omitted from the two prior posts, mostly via pictures.

We were really beat when we finally got home from the fishing trip, but at least we could claim success.  Not only did we each receive a big bag of fish filets, none of us got seasick.  The last time I was on a fishing charter, we were rolling pretty good and it made me pretty nauseous.  Luckily I hadn’t eaten, or there would have been more than ‘bait’ in the water.

This time, I didn’t get seasick at all.  I was pretty good at accounting for the boat movement by using my legs to keep my upper body steady.  While, I did take Dramamine this time, I prefer to credit my non-ralphing experience to my superior coping skills.

I mentioned that we set up for “trolling” in the last post.  I’d never done it before and it’s a pretty interesting setup.  First, they have something called the ‘planer boards,’ which are 2 x 8 beams set on edge and braced together about 2 feet apart.  It gets put in the water off the side of the boat, tied to a rope that’s attached to the top of the bridge.  There’s one for each side of the boat.  Once they’re out there, they glide alongside the boat as it moves forward, holding the line taut.

Then, you have a number of fishing poles with a lure attached.  Someone sends the line out about 50-60 feet behind the boat and then passes the end of the rod up to the Captain, who in turn clips the line onto the rope that’s holding the planer boards.  The line is released and the clip sends the line down toward the planer board until you snap the reel shut to lock it in place.

You repeat that step with several more rods and send it down the rope, stopping about 6 feet from the previous line.  By the time we were done, we had 4 rods on each side of the boat.  It looked like this:

You can see the planer board out in the distance.  All the fishing lines are clipped to that rope in the middle.

When one of the poles bent, the Captain would snap the line off the rope and hand it to one of us, who would go to the back of the boat and reel in the fish.  Sometimes, it got really crazy, when someone was trying to send out a line while someone else had a fish on the line.  The Captain basically functioned like an air traffic controller to keep us out of each other’s way and not get our lines tangled.  We did OK, for a bunch of greenhorns.

Also in the picture, off in the distance, you can see the Monroe (MI) power plant.  That’s how I was able to kind of keep track where we were.  There were three power plants around our corner of Lake Erie: the Monroe plant, the Fermi nuclear plant up to the right of Monroe, and Davis Bessie nuclear plant, off the other side of the boat.  For some reason, it gave me comfort to maintain a sense of where the hell we were.

By the way, this is the much-scorned “sheephead:” 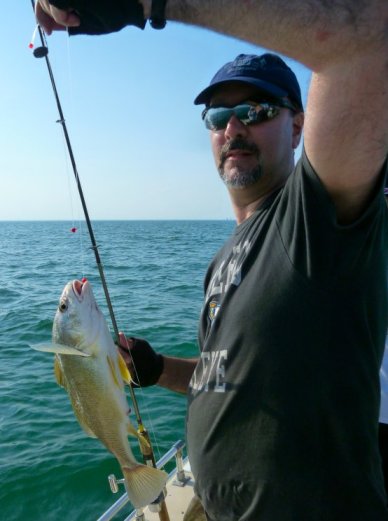 The FISH, not me…

And now, I give you…

(This is where I’d put the picture of me pouring Froot Loops, if I had only remembered to take it.  Also, you’ll have to imagine a picture of my pouring Apple Jacks, for Part 4.)

I spent the day Thursday at Rik’s house, writing the previous post.  That evening we were scheduled to go to Bowling Green, to see his son Jake’s little league game.

Remember in the first vacation post, when I said that my buddy is such a horndog that he gets his Viagra from a Pez dispenser shaped like Pinocchio?  Guess what he found on the ground, by the stands at the game? 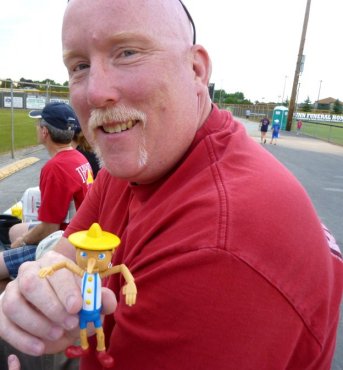 Sometimes these things write themselves…

It was fortunate that Jake’s game was in Bowling Green… that gave us the perfect opportunity to go to Myles Pizza, my old college haunt. 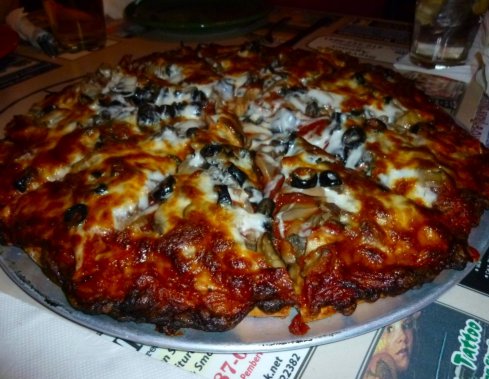 Still the best pizza in the world.  This one is black olive/mushroom/ground beef. 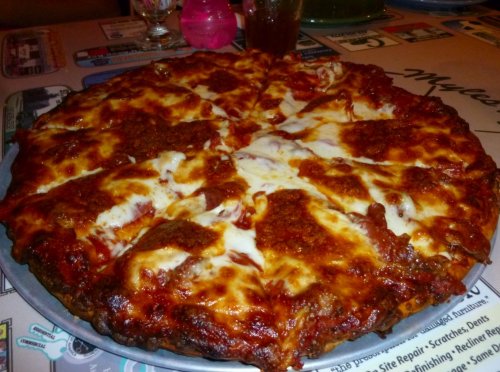 This one is pepperoni and mushroom.  Both were massive.

This excursion is always my treat, and I paid big-time this time, because everybody came, even Rik’s granddaughter Ailey. 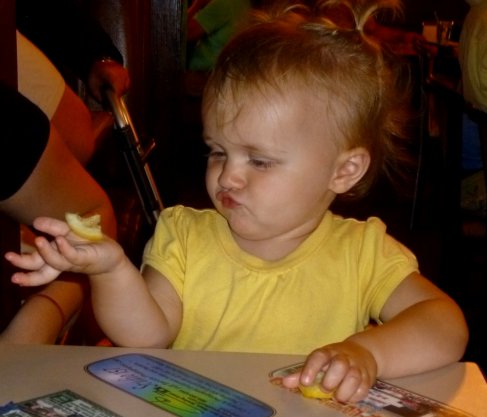 “When life gives you lemons, make a duck-face.”

We ended up at Myles earlier than we anticipated, because the last inning of Jake’s game was rained out.  It poured like crazy while we were eating but was clearing up by the time we left.  But it produced one amazing sky… 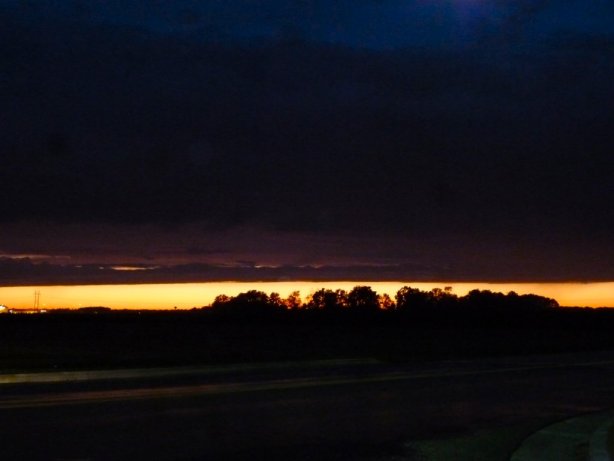 It looked like the aliens were about to land.  Where’s Will Smith when you need him?

Once we got back to John’s (garage), we were too full for beer, but some Crown Royal did nicely.  It’s funny, though, when you combine classy whiskey with casual, garage furniture… 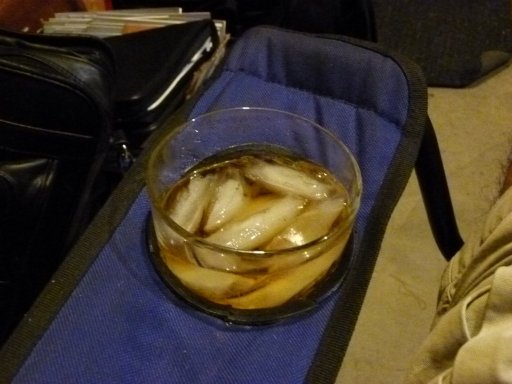 This is what you get when worlds collide.

While we were out there nursing our booze, John broke out his I-Pad for us to play with.  I’d never used one before.  I’ll tell you, that is now on my list.  Very nifty… Once I get a new PC and a WiFi network set up, I’ll be all over it.  Of course by that time, I’m sure the rest of the world will be onto something else.

One thing I forgot to mention about our experience at the Toledo Mudhens game on Monday… their opponent!  The Mudhens were playing the Lehigh Valley IronPigs.  It was like the battle of ridiculous nicknames. 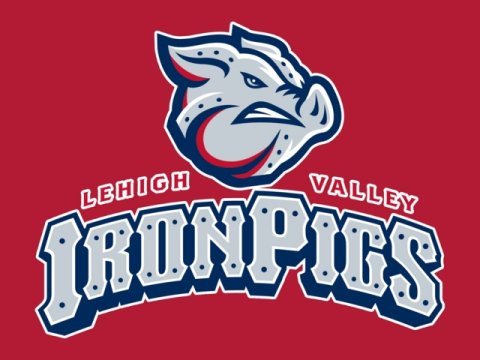 Needless to say, I need to get myself an IronPigs hat, to go with my Blue Wahoos topper.  Minor Leagues are the best!

Oh, and this is a shot of Rik’s son Jake and John’s grandson Gavyn, feverishly wishing that the jabbering mudhen behind us would shut her giant pie-hole. 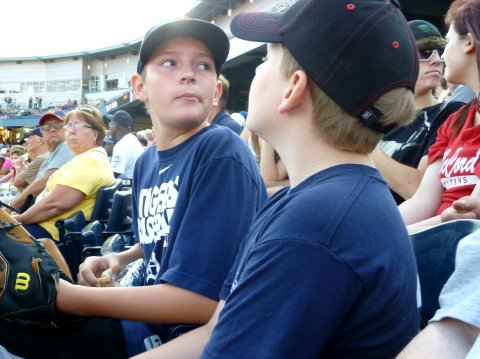 Even the sourpuss down the row wanted her to shut it.

On Friday, the only thing left for me to do was to go home, but first I had to re-pack.  You may be wondering how one goes about taking 16 fish filets home on an airplane.  Luckily, you came to the right place.

First, freezer bags!  Put the fish in a gallon-sized freezer bag, then fill it with water and put in the freezer.  (Yeah, be sure to seal it first.)  By the next day (or so) it should look like this: 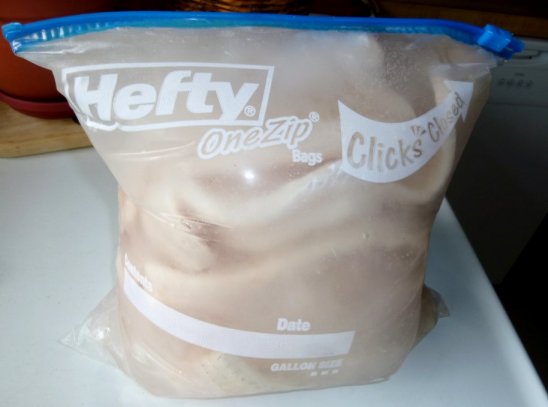 Mrs. Paul, eat your heart out.

Just before it’s time to go to the airport, take out the bag, wrap it in newspaper, and then wrap it again in foil.  Then it’s ready to go in your suitcase, providing you have room.

My only concern was going through security.  The last time I tried this, it was prior to the added security involving liquids.  But I figured, it really wasn’t a liquid now, was it?  Drop it on your foot and see how liquid it feels…

They definitely gave it a good look when my bag went through the scanner.  They pulled my suitcase out for additional inspection.  Can’t blame them for wanting to know what the big, dark, bowling-ball-sized mass in my bag was.  It sure wasn’t undies.

Anyway, I told the guy that it was a frozen bag of walleye that I worked really hard to catch.  They let me go, with a laugh.  And by the time I got home, it was still frozen solid.

I’ll let you know how it tastes, once we break the seal.

Up next: the second leg of my vacation extravaganza… a trip to Pittsburgh to see a bunch of bloggers and a ballgame.
Posted by bluzdude at 8:02 PM

Email ThisBlogThis!Share to TwitterShare to FacebookShare to Pinterest
Labels: Bluz LIfe, Picture This

Good look'in Sheepshead!
Heard on the Bowling Green grapevine Myles Pizza will soon serve both Frooot Looops and Applejacks PIZZAS! Ready in time for your next visit.

That pizza looks so particularly Ohio it kills me. Maybe because that's just what my mom's pizza used to look like. AND NOW SHE'S DEAD.

Your fish-toting skills are unmatched.

Those fishing photos were fantastic. Makes me miss the Lake in Minnesota.

Katie Ett and her dead mother. Will it never end?

Also, you're kind of awesome. For real.

And they're right by a college campus... I'm sure it will go over big-time.

They could totally put some blueberry filling in the crust!

The fish-toting skills belong to my buddy John. I was just the "mule."

I literally drooled at that pizza photo. And my heart stopped just for a second or two.

Next time you meet up with your buddies in Toledo for a Mudhens game, you should take a trip about 20 minutes down I-75 to Bowling Green and some Myles Pizza. It’s one turn off the interstate. It’s totally worth the trip.