In my last post, I wrote about my early experiences working retail.  I now pick up the tale after being promoted to Assistant Manager of a huge record store in Toledo OH.

It was a big change, when my manager was promoted to District Manager.  I went from 3rd Key to Assistant, and the Assistant became Manager.  Luckily, I had a great relationship with her.  She was a lot of fun to work with, despite her being nicknamed, The Dragon Lady.

That came from when the Manager and I used to go out to this Mexican restaurant for lunch, and they served these killer margaritas.  We’d have a huge enchilada and two or three margaritas, and then he’d swing me back by the store and say, “I’m going home.  YOU go in and tell The Dragon Lady.”

At least she couldn't be mad at me… I was the one who came back (even if I was useless for the rest of the day.)

Toledo was kind of an “outpost” in my DM’s new territory.  Most of his other stores were in Cleveland; some were little mall stores, and some were larger, freestanding stores like in Toledo.  A number of them had some operational problems, so we got used to him calling us out there and plunging us into cleanup projects.  Usually it was a situation where the store had an excess of “returns” filling up the back room, which needed processing.

The record business was unique in the retail world in that you could write up a percentage of your stock and return it to the record labels for credit.  Like if the label rep convinces you to buy 2 cases of a new release and it promptly stiffs, you can return the overstock after a certain amount of time.  You could also write up all returned or defective merchandise.

But it was a very labor-intensive process which often got neglected, hence the need for some fresh people to come out and tackle the project.  Cleaning overstock out of back rooms became my calling card.  I was like Rambo with a tie tied around my head, a box cutter on my belt and a wild look in my eye.

There was one store manager out there that I particularly liked.  She was a cute little blonde named Debbie, who ran our mall store in Parma, (the place Drew Carey used to sing about in his original TV show theme song).  After cleaning out her back room like a pen and box cutter-wielding tornado, I asked her out.  I mean, how could she refuse me, after all the work I just did for her?  Anyway, I brought her flowers and we had a pleasant, if chaste, date, before I headed back to Toledo.

I didn't have a chance to work for the Dragon Lady very long before our DM changed the game.  One day in January, he phoned me and told me to pack a bag and meet him at 7:00 AM at our Parma store.  I was pretty sure that meant he was assigning me my own store, but he refused to give me any details.  He told me to tell no one.  It all was very cloak and dagger.  I was just hoping that I would have the chance to continue working on Debbie.

So, cut to Monday morning when I met him at the roll-down gate of the store.  We went to the Roy Rogers’, across the hall, where he crushed my dreams in one fell swoop.

“Debbie is a felon and a lesbian.  Last night she turned over a gym bag with almost $5,000 in it that she had stolen from the store.  She stole money from the Christmas deposits and has been rolling the funds over from the subsequent days to cover it.  She’s in jail and you’re the new manager.”

Always right on point, I am.  But apparently the irregularities with the deposits made our Loss Prevention guys curious, so they went into the store after hours and found evidence of her embezzlement.  And they also found a stash of love letters between her and a female friend, hence the “lesbian” comment.

So I didn't get any more dates, but I got my own store.  I wasn't disappointed for very long… I had too many other emotions flooding through my body…

Was I ready for this?  Could I really be the guy in charge?  How could I be manager when I didn't know what the EFF I was doing most of the time?  I was excited, worried and terrified all at once.  Once again, I’d stepped on the merry-go-round and it was spinning me along whether I liked it or not. 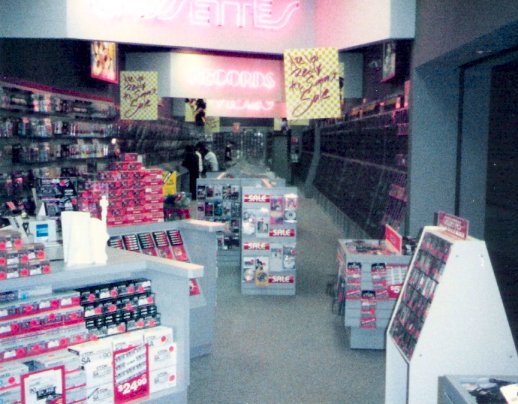 This was my new “home,” which was every bit as slick and ultra-modern as my last store was rough and retro.

Somehow, that next week, I found an apartment, rented a truck, packed up my shit in Toledo and hit the road for Cleveland.  It was tough leaving my buddies back in Toledo, but I was fortunate that I wasn't going too far; just two hours away.  The scary part was that I was completely on my own, with no security blanket of friends or family.  I had to be a grownup now.

Still, I made friends out there pretty fast.  In fact, one of my friends from the Toledo store, Kenny “the Viking,” was already out there running one of the freestanding stores.  And another guy, Ron, moved out there about the same time I did, so the three of us hung out a lot together.  (See my Tales from the Strip Club posts.  They all start with my moving to Cleveland and hanging with those rascals.)

Settling into Cleveland was a lot easier than getting started at the store.  My inherited staff was kind of a mixed bag, the most problematic of which was a father/daughter team that worked there.  Daughter was a high school student; father was a part-time DJ, the latter of which did not get along with my DM.  My first order of business was to fire him.

Man, I was scared shitless.  I’d never fired anyone before and this guy was probably 15 years older than me.  But they were used to basically doing whatever they wanted in the store, like playing his homemade mix tapes instead of the tapes the company sent.  Now, I hated playing the company tapes too, but as a new manager, I was a Company Man all the way.  Plus, I had direct orders.

It turned out to be easier than I anticipated.  The DM spoke to him ahead of time, basically telling him that the party was over and he was cutting his hours back.  When I met with him, all I had to do was accept his resignation.  Somehow, I managed to remain on good terms with the daughter and she was a turned out to be a decent employee.

So, I got their back office systems in order, instituted the cash management techniques I learned in Toledo, and slowly but surely turned the store around.  Sure, there were some bumps.  I was still a bit too heavy-handed; probably over-compensating for feeling like a rookie.  But that was also the model I was used to.  When my DM was my manager, he set the rules and you followed them, period.

You can never underestimate the importance of a quality Assistant.  One person just can’t be there 24/7; you have to leave sometime, and you need to turn things over to someone that shares your vision.  It’s so much easier said than done.  Sometimes, I found, the Assistant does more harm than good.  If you’re lucky, you find that out before they do too much damage to your store and the rest of the staff.

I was lucky in Parma that I was set up with a pretty good Assistant and 3rd Key.  But I also learned that it wouldn't last.  If you have a good Assistant, you’ll inevitably lose her to a Store Manager spot opening elsewhere.  That’s the nature of the business.

Another thing I wasn't used to was the theft.  There was so much more of it in a mall setting than in my old freestanding store.  The biggest problem was the bin of loose cassettes we had near the doors.  It was just too easy to shove a couple in your pocket and ease out the door.

We also had to deal with professional record thieves, called “boosters.”  These were guys that worked in teams and could clean out whole sections of your bins.  They would only target high-demand hit albums, which they could easily resell to wholesalers.

The scheme was simple; one guy would occupy the clerk with constant questions while the other guy would grab giant handfuls of albums and shove them into big pockets sewn into the lining of his jacket.  They would work every store in a market and then move on.  So we were always on the lookout for these guys, and when anyone got a line on one, they’d call all the other stores in the district.  Some of these guys even wore wigs and disguises and stuff.

But I’ll never forget that punch in the gut feeling when I’d walk down an aisle and see one of the album pockets in a record bin sitting there half empty, when I know that 10 minutes ago, it was overflowing with product.  Fuckers…

Hey, you want to learn how to make a living by stealing from stores?  Ask a retail manager.  We have to know all the tricks if we are to have any chance of stopping them.  I used to love hanging out with our Loss Prevention guys, who always had these amazing tales to tell about scams they've seen, both internal (like the Debbie situation) and external.  What a world.

You know, I only ever intended to make one long post or maybe two short ones to talk about my retail life.  But don’t be surprised if this ends up as a series.  I have so much more to talk about.  I mean, I thought I was going to write a paragraph or two about Parma, until I started typing.  But how could I possibly omit a story like the felonious lesbian?

Stay tuned for more.  (Stories, not felonious lesbians. And "The Felonious Lesbians" is totally a great punk rock band name.)
Posted by bluzdude at 7:26 PM