Retail Bluz - Part 4 - The 'We're not in Kansas Anymore' Edition

In my last – three - posts, I wrote about my early experiences working retail.  I now pick up the tale as I come to the end of my tenure at my mall store in Parma, OH.

All in all, my tenure at the Parma store was pretty successful, both personally and for the store.  I was often called upon to train new managers and that helped add to my own little “sphere of influence.”  I wasn’t just training my own managers; I would train new hires that were slated to run the new stores we were opening.  Anyone that you train, in a situation like that, will always look up to you as an ally and an authority (as long as you’re not a bozo, I suppose.)

I always looked at it like a “family tree.”  My DM was the trunk, the original managers from Toledo, (me, Kenny the Viking and the Dragon Lady) were the main branches, and everyone we trained thereafter branched off further to provide the canopy.

A little more than a year after I took the Parma store, Kenny the Viking decided to return to Toledo, so the DM tapped me to replace him.  He was running an 8,000 square foot freestanding store in Maple Heights, much like the store I started in, only smaller.  I recommended that the trainee with whom I was working, step into my place in Parma.  (You may remember her from the Whatsername Trilogy.) 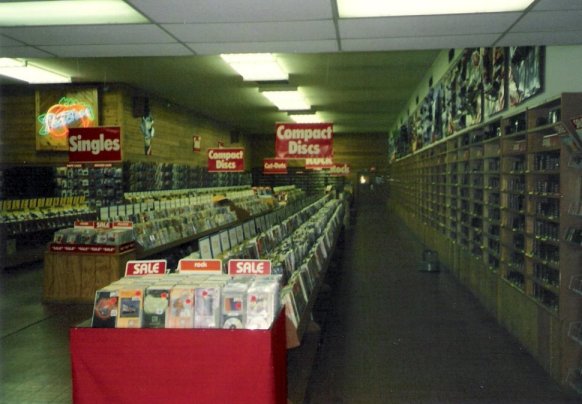 This is the Maple Heights store, shown from the front of the store to the back.  That’s our tape wall on the right.  You can see that we still sold CDs in the non-eco-friendly 'long-box.' 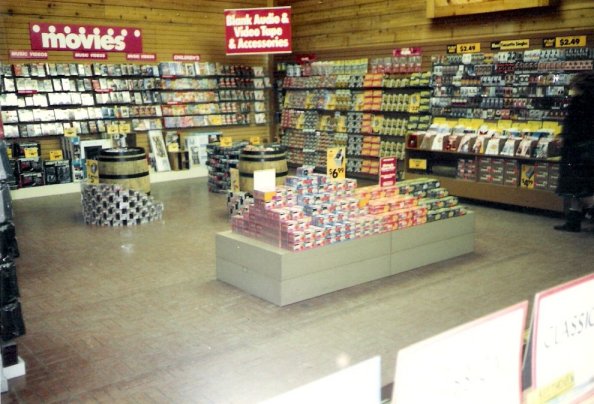 This area was to the left when looking at the first picture.  The registers were just out of the shot, here, to the left.

The day I took command of the store was the day of the AFC Championship game between the Cleveland Browns and Denver Broncos.  I remember being introduced to the team as their new manager, and the first words out of my mouth were “Go Broncos!”

Yeah, I probably started off on the wrong foot.  But I had to laugh because that particular game went down in history as the one with “The Fumble,” wherein the Brownies had the winning touchdown elude them when their running back fumbled the ball just before he crossed the goal line, allowing Denver to hold on for the win.  My Steelers sucked that year, so without them in the hunt, all I could do was root loudly against their biggest rival.  In fact, I even went so far as to paint my office gold, with black trim.  It’s a wonder they didn’t throw me out on my ass. 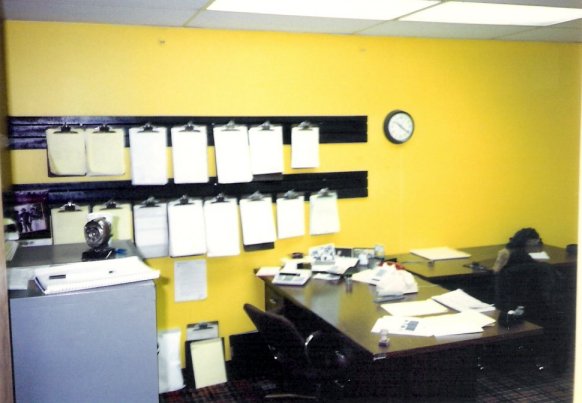 This was my office, after painting.  In all honesty, when I looked at the swatches, the color I selected didn’t look this yellow.  I was expecting Steelers gold, not screaming canary yellow.

There was a huge difference between the Parma mall store and the Maple Heights freestanding store, and it wasn’t just size and décor.  Maple Heights was on the “east side” of town; a considerably more urban area than white bread, suburban Parma.  I wouldn’t be getting the teenybopper mall kids and their mommies and daddies in my store, my clientele would be older and predominantly African-American.  I admit that I experienced a bit of culture shock when I started out.

I remember the first Friday night I was there.  I was working the floor, basically just drifting around, keeping an eye on things and trying to help them find stuff.  It was tough because I didn’t yet have a good handle on the popular music there, nor an ear for the lingo.

The first customer that needed my help asked me, “Ganny Blah Blue Bleah?”

Bluz: Hold on, let me find out.

Knowing that this could go on all night and I still wouldn’t know what she wanted, I bailed.  I went and found one of my black employees and asked her to go and help that lady.  When she was done, I asked her what the hell the lady was looking for.  And that’s when I discovered the ongoing popularity of Bobby “Blue” Bland, an old R&B singer.

I know I had just gotten back from Nebraska but I now certain that I wasn’t in Kansas anymore.

On one hand, working there gave me the perfect chance to start selling some blues.  I got on the horn with Alligator Records in Chicago and began getting promos sent to us for every new release and set up an expanded blues section.  I had to go through independent wholesalers to get it because our company didn’t keep a wide enough selection in their warehouse stock.

Since I always worked Friday nights, it became our de facto “Blues Night,” (much to the chagrin of my younger employees.)  But my clientele loved it. I’d rock the place all night long with Alligator’s “Genuine Houserockin’ Music.”  There was an album called “Showdown,” by three stellar blues guitarists, Albert Collins, Johnny Copeland and Robert Cray.  I used to amaze my newer employees by selling it every time I played it. 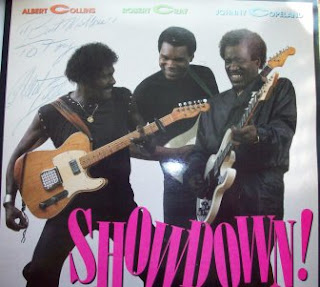 My copy of “Showdown,” signed by the late, great Albert Collins.  Seriously, this is one of the best blues albums ever.  So sayeth the Bluz Dude.

I’d wait until I had the right crowd in the store… mostly black, middle-aged and female.  Then I’d go, “Watch this… I guarantee that someone buys this tape.”  I’d put on “Showdown,” the feet would start tapping around the store, and always… ALWAYS, someone would come up and go, “What is THIS?”  I’d whip the tape on them and then look at my employee, like: “Who’s the Man?”

The stock selection proved to be an ongoing problem.  Our company wanted to supply as much of our product as possible, through their centralized warehouse.  Unfortunately for us, their stock modeling was mostly based on generic mall stores with predominantly white customers, not urban locations.  I could rarely get the artists my customers wanted, through our usual means.  So I ended up using those independent wholesalers, called “One Stops,” more and more.

Director’s DVD Commentary: One Stops are so named because they carry product from all labels, which you can get in just “one stop.”  You call them up and tell them what you want, and it’s delivered to you the next day.  The tradeoff is that they cost more per unit than when our company bought titles to distribute through the warehouse.  It was a good way to stock up for a busy weekend when you’re out of the hot titles, or to supplement a particular genre, like I was doing.

We also customarily had these cassette racks at the front of the store, with older, “catalog” titles, available at a discount.  Typically, it was stuff like Aerosmith’s Greatest Hits, the Led Zepplin titles, AC/DC titles, and other classic rock tapes, available for between 4.99 and 6.99.

Side Note: One of the worst things I ever heard was when I saw a kid holding up AC/DC’s “Back in Black” and saying, “Oh look… they have oldies…”

This was in 1988!  I almost choked that snot-nosed little fuck.

But those titles didn’t make much sense in my store, so I basically created my own cassette rack program.  I created a couple of soul and jazz racks filled with Luther Vandross, Freddie Jackson, Diana Ross, Michael Jackson, Stevie Wonder and all kinds of Motown titles.  The trouble was that our warehouse could rarely fill my orders.  Either they were out of stock, or cut my order on sight because it didn’t fit with their models.

I had the same problem with Christmas music.  They sent me all the Bing Crosby, Nat King Cole, Barbara Streisand and Carpenters I could display, but precious little of anything I could sell.  My first Christmas there, I sold out every piece of my R&B Christmas product (probably a grand total of about 12 pieces) by noon on Black Friday.  Try as I may, I was never able to get any more in subsequent orders.

The following year, I obtained several cases of the good stuff from a one stop.  That lasted me to the end of Thanksgiving weekend.  Eventually, I got it down and by my third year there, we were flush with Christmas music from the Temptations, Four Tops, Stevie Wonder, James Brown, Alexander O’Neal and any Motown titles I could get my hands on.  Before I moved on, I was able to provide my successor a list of all the in-demand titles, with target stock levels.

Sounds like you got quite the musical education getting moved all around. Seems invaluable and fun.

I really did. That part of it WAS fun. Unfortunately there were many other parts that were considerably less fun. I'll be getting to that shortly.

After Aerosmith re-released Sweet Emotion in 91, I got into an argument with a snot-nosed little fuck who didn't believe me when I told him that the song was originally from 1975. Since this was before Google, I had to bring in my 33 to prove it.

These snot nosed little fucks need to mind their elders... who are not at ALL old. At least your LP was good for something besides a frisbee.