As you can see by the “Part 7” in the title, I've been writing about my early experiences working retail.  If you’re new to the series, you can pick up the trail from the beginning by clicking here for the first “Retail Bluz” post.  I now pick up the tale during my run at a large, freestanding record store in Maple Heights, Ohio.

As I've been trying to demonstrate throughout these last couple of posts, life as a retail store manager was really tough.  The pressures brought to bear on us managers were huge, especially considering most of us were basically kids in our 20s.  (OK, to me NOW, people in their 20s are still “kids.”)

Remember that we had the hope, aspirations and bottom lines of a very large corporation resting on our young shoulders.  We had a store to maintain, product to order, staffs to hire and run, theft to prevent, people to assist and money to properly account for.  That’s a lot of balls in the air, and dropping any one of them could spell the difference between making projections or not.  (And keeping your job or not.)

The holiday season was ungodly.  I basically worked 60-hour weeks from Black Friday on.  The week before Christmas, I probably worked 80 hours.  I’d go home at night, collapse into bed, then dream that I was still at work, taking drops and clearing customers at the checkout.  There was no escape, not even in sleep.

The piles of money at Christmas were gargantuan.  Have you ever seen $13,000 in cash spread out on a table?  I have.  We actually had days when we’d have bundles of fifties or hundreds to deposit.  Believe me; I could see how someone could convince themselves that no one would ever miss a couple bundles of twenties.

It was a non-stop sprint from Thanksgiving to Christmas Eve, when we could finally close the store at 5:00 or 6:00 and breathe, knowing we at least had Christmas Day off.

As soon as we’d close, I’d usually hop in the car and head for Pittsburgh, where Grandpa would have some cold Iron City Lights waiting, and Grandma had soup, sandwich and a Klondike for me.  I’d spend Christmas with them and the rest of the extended family, then head back to Cleveland the next day for my shift at noon.  The week after Christmas was almost as busy as the week before, due to returns and gift certificate redemptions.  I couldn't let up on the gas until January.

Season after season we’d grind on.  I forgot what it was like to actually enjoy the holiday season.  I did all my shopping either at my store or the liquor store.  To quote Al Bundy, that whole period became like one big month: “Helluary.”

I realized, during my time in Maple Heights, that I needed to get out of the stores.  I loved the industry, but I wanted a career where I didn't have to wear a name tag, and 6-day workweeks weren't the norm.  I figured my best bet would be to try to get a job with our home office, in upstate New York.  I had a decent enough relationship with the Regional Managers that visited and the home office people I talked to on the phone, so I kept my ear out for any openings at HQ.

Eventually a job opening came up for a procedure writer, so I applied for it.  In retrospect, I’m surprised they even talked to me.  I had zero that I could show them as far as examples of my procedural or technical writing.  All I had was a story I wrote, for my own amusement, about playing backyard football (which will totally be a post here, one day).

I had a phone interview with the operations manager, and then I was supposed to talk with one of the big honchos, Mr. Smooth, when he came out for a new store opening.  The execs love to come out for the big store openings, so they could stand around and tell each other what a great job they’re doing, while the rest of us hired hands work our asses off to get things set up.  In this case, we were opening our Midwestern “flagship” store at the Terminal Towers in downtown Cleveland. 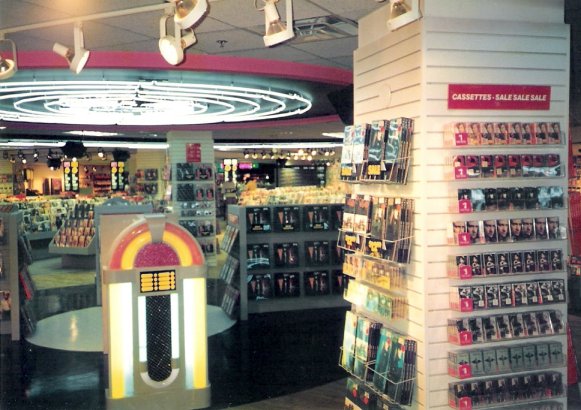 This was the first store in which we used such a glitzy design. 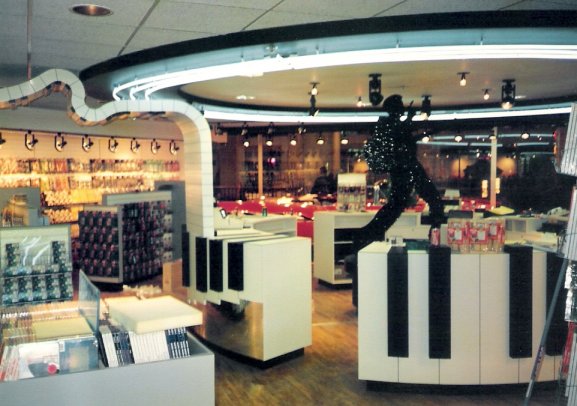 I loved the piano key wrap-around for the registers.  I wanted a table like that in my apartment.

Mr. Smooth said to come out early and we’d talk over breakfast.  I was so excited… an interview and a meal, all in one!  So we sat down, with me in my store-opening work clothes and him in his impeccably tailored suit.  The waitress came and I ordered a big stack of pancakes with sausage and toast.  Mr. Smooth ordered a muffin.  That was it.

[Gulp]  Fuck.  Me.  I looked like such a rube.  I guess he didn't want to spend that much time.  Anyway, I didn't get the job, which was no surprise.  I honestly wasn't qualified.  (In retrospect, it’s funny because I do exactly that kind of job right now, and that’s how I now know how unqualified I was.  Back then, I didn't know what I didn't know.)

I don’t know whether it was my idea or my DM’s, but we realized that I’d have such a better shot at making the leap to HQ if I already lived in the market.  So that’s how I came to pursue a store manager position at the mall store closest to the office.  It was a high profile spot and an opening was coming up.

With my DM and RM behind me, I got the job at the New York store.  They flew me out for a mere day and a half, so that I could find a place to live.  The RM was just so cavalier about it… “Oh, just throw your shit in a truck and get out there.”

I should have taken that as a sign that these people had even less regard for their managers that I was accustomed.  It was like all I had was a couple of folding chairs, 2 dishes and a fork.  I had to seriously scramble, not only to move, but to find a reasonable apartment for what they were paying me.  Sure, I got a decent bump in pay for the new store, but the cost of living was far higher there than it was in Cleveland.

I went from paying about $325 per month for a large 2-bedroom place (that allowed pets), to a 1-bedroom place that cost me $485.  And I had to give up my beloved Siamese, too.  There might have been better places around, but I just didn't have the time to find them.  I had the manager I was replacing driving me all over town, so I absolutely had to return to Cleveland with a New York apartment in hand.  Don’t you just love it when you get a big promotion, but you standard of living decreases dramatically?  That’s retail for you.

At least I knew I was leaving my store in better shape than I found it.  My old friend The Dragon Lady was succeeding me and I wanted her to be able to hit the ground running, with a finely tuned machine in her hands.  Didn't work out that way, but I tried.  More on that, later on.

Now I was taking the Big Leap, moving far from everyone and everything I knew.  I wouldn't have any kind of support system out there, the way I did in Cleveland.  I was going to be the New Guy and would have my trials by fire.

So it was the summer of 1990 when I “threw my shit in a truck,” and with my trusty cat and my best friend, Brill, drove a 22-foot Ryder towing my Honda CRX behind, clear through to upstate New York.  All this was so I could take a high-stress job that I didn't want, just for the chance to get a job that I did want.

Think things went according to plan?  Fuggedaboutit.
Posted by bluzdude at 7:00 AM

Would it even be possible to find an apartment in a day now? The idea makes me queasy. So does the idea that I don't even own a truck. Think I can get a cab from here to Ohio if I ever need to move in a hurry?

Given those small NYC apartments, you could probably fit all your stuff inside the cab, then ride up on top in a rocking chair, like Granny on Beverly Hillbillies. Just don’t smile while you’re on the interstate. (Bugs…)

To tell the truth, I think it would be easier to find an apartment in a single day, for one simple reason… the Internet! In 1990, I had to rely on a couple of cryptic lines in a newspaper ad, then drive around the (unfamiliar) city to check out the sites in person. Believe me, there were MANY that looked better in writing than they did in person.

Remember that scene in The Fugitive (with Harrison Ford) where he rents a room from that Polish lady and her weird son? I looked at a place that was very similar… and totally NOT what I had in mind. Couldn’t tell from the write-up though.

Now, I could do an online search and narrow my scope considerably, often getting a look at the place, before even setting foot outside.

Even in 1998, when I first looked for apartments in Baltimore, I went to an apartment search business, which laid in my requirements and did a search for me. (I didn’t have a PC yet.) Because of the advance intel, I leased the first place that I visited. Whole thing took all of a couple hours.