Happy Thanksgiving Week!  I didn’t take a particular day off this week, but it should still be light.  Obviously I’ll be off on Thanksgiving (given that I don’t work for some greedy retailer or mall who insists on ruining their employees holidays by forcing them to go to work right after dinner).  I expect to get off work a couple hours early on Wednesday, just because it’s supposed to be the day before a major holiday, and NOT because we’re expected to get our first serving of snow.  Then Friday, there will be me and one other person bumping around our department, and that’s it.  Most of our building, as well as the entirety of downtown, will be a ghost town.

Most people want Black Friday off, but since I don’t, I always volunteer to come in and take up space that day.  I suspect my boss had the other person come in just to keep an eye on me.  She probably wants to be sure I don’t go frolicking through everyone else’s cubes and rub their office utensils on inappropriate body parts.  Again.  Stupid security cams.  At least, I can play the music at my desk a lot louder than usual.

Hit Me
If you have your own blog, have you noticed more activity from Google on your website hits counter?  Last week I noticed a huge bubble starting Wednesday night, peaking Thursday, and still running high. 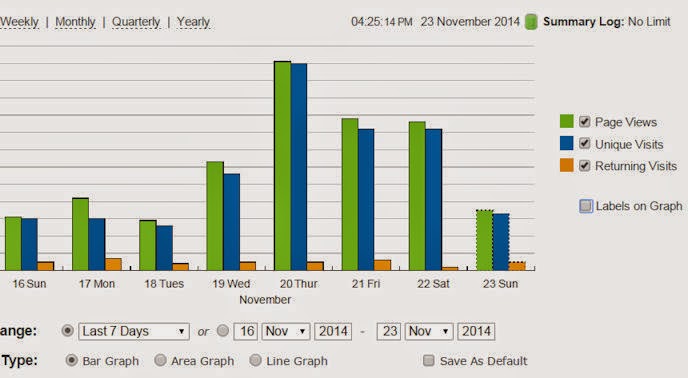 Normally I’d be thrilled with a bump like that, but three quarters of all those hits are from Googlebot-Image.  Apparently, they’re cataloging all the pictures I’ve used. 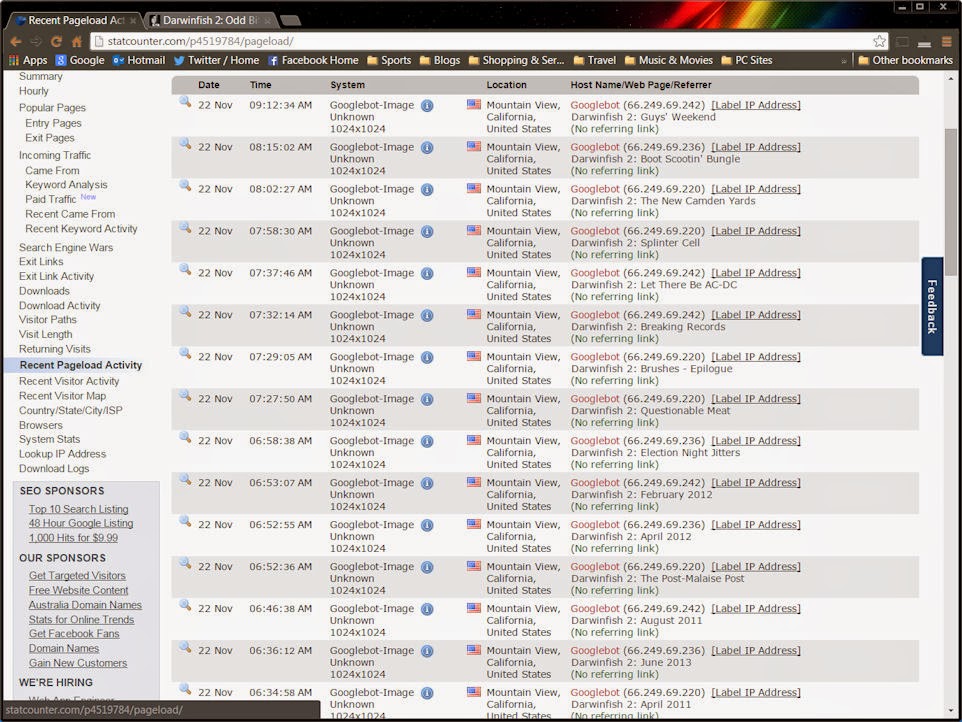 This was one particularly Google-heavy time period.

So, are you getting this too, or am I just special?  Or long-overdue for a good cataloging?

Mock… Yeah… Ing… Yeah… Jay… Yeah…
Over the weekend I went to see the new Hunger Games movie, “Mockingjay Pt 1.”  Loved it.  Thought it was very well done, considering it was only half a movie.  I think this will be one of those DVDs (eventually) where you can’t just watch Part 1; you have to watch both together.  (And it still wouldn’t take as long as one “Lord of the Rings” movie.)

The acting was top notch; Jennifer Lawrence was amazing and totally grabbed your attention and empathy.  But there was one thing that kept distracting me from complete immersion into the film.

Did you see that article where Jennifer Lawrence’s co-starts were talking about doing kissing scenes with her?   Liam Hemsworth (who played “Gale”) told Jimmy Fallon, “She's one of my best friends, I love her, but if we had a kissing scene, she would make a point of eating garlic or tuna fish or something that was disgusting. Right before the scene she'd be like, 'Yeah, I ate tuna' or 'I had garlic, and I didn't brush my teeth.' And I'd be like, 'Fantastic, I can't wait to get in there and taste it!” 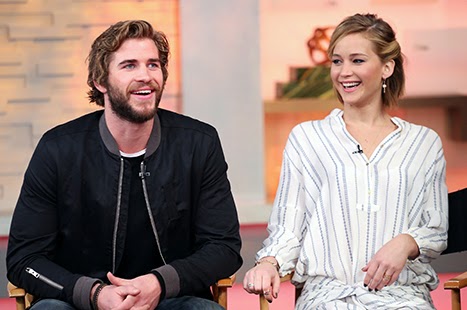 Apparently there were a lot of practical jokes on the set and this was just Jen holding her own with the boys.  But still, that knowledge totally colored my viewing experience.  The one time they kissed in the movie, it was supposed to be moving, but all I could think was, “Bleah… I wonder if this one was garlic or tuna?”  Pretty much took me out of the moment.  Luckily for Hemsworth, this kiss was just a quick one, rather than a prolonged make-out.

What a tragedy though, when kissing someone so totally kissable.

Regal Ripoff
My usual movie house is in the Regal Cinema chain, so at the beginning of the summer, I joined their Regal Club, which awarded you points based on your food and ticket purchases, to be redeemed for more food or tickets.  It was scaled thusly:

I don’t know about the food purchases, but every ticket I bought earned me 10 points.  So last week, when I went to go see “Interstellar,” the ticket guy just handed me a coupon for a free small popcorn.  I wasn’t in the mood for popcorn, so I held onto it; but I also had intended to save up the points for a free ticket.

When I went back this weekend, I asked about how that works; about how you can amass your points for a larger prize.  The answer shocked and disappointed me.  You can’t.  Not easily, anyway.

He explained to me that once you hit 50 points, the register automatically spits out the coupon for the popcorn, and that’s it.  So I said to him, “Your Regal Club material, right over there, (pointing to the table beside the ticket counter), says you can redeem 150 points for a free ticket.  How do you get 150 points of you have to take the 50 point popcorn?”

He said, “You have to earn the tickets all at once, like buying multiple tickets, or a larger order (translation: “a fuck-ton”) of concession food.”

That left me severely pissed off.  I didn’t argue with the kid… hell, I have underwear older than he is; I know he’s not making policy.  But damn, what chance does that give a single guy?  Maybe if I was a member of Cassie’s family, and a night out at the movies entailed tickets for 2 adults, 4 kids, and several dogs and cats, all with corresponding concessions, maybe I could earn a free small coke.  But as a dude buying one ticket at a time?  I guess it’s a popcorn life for me.

So what the hell, I cashed in my free popcorn ticket.  And then I promptly realized the true evil of the setup.  You can’t just buy popcorn for a movie.  You have to have a drink too, to wash it down and to keep you from going into salt-driven dehydration before they roll the opening credits.

If I would have thought about it at the time, I should have immediately turned in (or cut up) my rewards card right there at the desk.  What a freakin’ ripoff.  Their program is not nearly what they claim it to be.

I figure I’ll wait until I see a more “senior” ticket person, when there’s no one else in line, and ask about it again.  Then I can take a little more time to argue it out, drop in lots of phrases like “discriminates against single people,” and “false advertising,” and if I don’t get any traction, culminate with whipping a pair of scissors out from my coat and cutting up the card.  Of course, they’ll probably claim I was going to stab someone, and call the cops.  I should find a pair with the rounded tips, like from grade school.

Email ThisBlogThis!Share to TwitterShare to FacebookShare to Pinterest
Labels: Bloggers, Bluz LIfe, Bluz on Film, Bullshit, Odd Bits, Things That Piss Me Off

Ha ha. Awe. Yes. Matt just took three of the four kids to the movies last weekend and in order to do so, he woke up Mae and Claire from naps so he could save three bucks a ticket on matinee. So...I feel for you.

What did you think of Interstellar? It was nearly 3 hours from what I've read. No, thanks!

Yes, Interstellar clocked in at roughly 2:45, plus previews and all that crap. I thought it was good, very well done, overly long, and with too many "WTF" moments. Like you have to be a quantum physicist to truly understand everything. And it STILL comes off like an episode of The Ghost Whisperer.

I have the AMC Stubs card, and I love that thing. $10 back on $100 worth of purchases, that's it. Use it on popcorn, use it on another movie, use it on whatever. Forget that whole "cash it in for a tiny prize" nonsense.

Also, our Google search traffic doesn't seem any different than it usually is. Though we are getting an unusually high amount of search hits for "two ugly hobos." Not sure how I feel about that.

The AMC program sounds much better than this Regal mess. Maybe I should start complaining on Twitter and hashtag them... #RegalRewardsSuck