I had jury duty on Friday for the second time in 2 years.  I sincerely want to serve on a jury, which is something (else) that separates me from 90% of the population of Baltimore City.
When I got summoned in February of 2009, I blogged about the experience.  If you haven’t seen that post, I highly recommend reading it now.  It will make today’s post much easier to understand.  Just click here; I’ll wait.
For those too lazy pressed for time to check that post, the gist of it is that even though I wanted to be on a jury and got picked to be on a jury, I didn’t get to do anything jury-like except wait around.  We were seated on a Friday afternoon and when we came back on Monday, they held us in the jury room for two hours before bringing us out to tell us the trial could not go forward and “thank you for your service.”
I was totally let down and I believe I coined the term “judicial blue-balls,” for what I was experiencing.
But I did learn some valuable lessons, the foremost being to make sure I do NOT have chili for dinner the night before.  Gas bubbles, closed quarters and hard wooden benches do not make for a comfortable experience.  And I almost blew it because Thursday morning, Pinky asked me if I’d prefer fish or chili for dinner and I answered “chili.”  Consequently, she didn’t take any fish out of the freezer.  It was about mid-day that I realized what I’d done, so when I got home and found that I was fresh out of Gas-X, I had to call an audible and have soup and sandwich for dinner.
The nuts and bolts of the day were pretty much as I described in my other jury duty post.  I sat in a big room and waited to get called up to do stuff.  The big difference here was that instead of having #008 like I did last time, I had #641.  There were a lot more people I had to wait out.
Another difference this time is how many more people have smart-phones.  And because I didn’t want to put on my MP3 player, lest I miss an announcement, I had to listen to a dozen cell phone conversations going on at once.
Oh, and did I mention that all cell phones were supposed to be turned off inside the courtroom?  There are signs about it all over the building.  But I was in an “overflow” room where there was no adult supervision, so people were talking and texting like they were trying to overthrow the Egyptian government.
Even with my “high” number, I still got called to a courtroom more quickly than the last time.  At 10:45, they called for jurors #402-731.  I was like, “Wow, that’s a huge number of jurors.”
But then once we got to the courtroom, there were only about 100, so then I was like, “Wow, there are a TON of people that just don’t show up for jury duty.”  But that’s OK… more justice for me.
The courtroom to which I was called was far nicer than the shabby "conference room" I was in last time.  But one thing that was the same was the “church pew” seating.  The hard backed wooden benches are NOT good for my back.  It’s also ironic that normally when you’re seated in church pews, you’re receiving guilt, not determining it.
I got through the voir dire (jury questioning) unscathed, just like last time… the only time I had to stand up was for the question about ever being a victim or perpetrator of a crime.  (I was a victim, damn it!  My car got broken into in 2008.)  But there was a guy behind me that must have been very determined not to be a juror… he stood up for almost every question.  It was no surprise when he was dismissed, along with about 20-30 others.
After lunch, they got down to actually seating the jury.  This was where I became conscious of my relatively high number.  Starting in the low 400s, they called up 5 at a time to step forward and either seated or dismissed.  I’d say 1-2 out of every 5 got dismissed. So by the 4th call-up, they had 12 on the panel.  The lawyers diddled around a little more and changed their minds on two of the seated jurors and after 3-4 more call-ups, they had their final panel.
BUT, they still needed the alternate jurors, so NOW it’s my turn to go up.  Just my luck… I am now Alternate Juror #3. 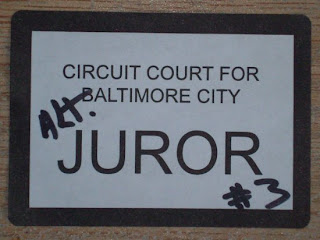 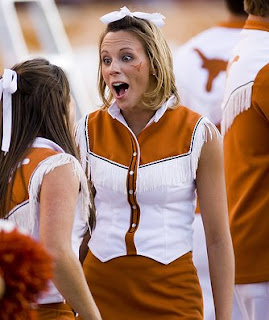 “I was like, ‘OhmyGod’ and then he was like, ‘OhmyGod’ and then we were both like OHMYGOD!”
Picture from thedailylonghorn.blogspot.com
So as it was still early, they moved us again; out of the nice courtroom and into another shabby-"conference-room" courtroom, to start the trial.  First, everyone went to the jury room to stow our things and bitch about having to be on a jury.  Gah!  All these dipshits are complaining and here I am, 3rd alternate and dying to be an honest-to-God jury dude.  That means three other jurors would have to be removed before I would get to play.
Hmm… there were at least three people on their cell phones, surfing and texting from the jury room.  Maybe I can rat them out to the clerk.  Food for thought…
So, we go out to take our seats so the trial can get started.  I’m aghast at where I have to sit.  Obviously, there are only 12 regular jury seats for the 12 jurors.  The two alternates and I are on chairs beside the jury box, like kids at the card table for Thanksgiving dinner.  And me, the guy who likes to stay in the back of the room, in the corner, out of everyone’s way, is right there up by the front rail with my big old legs and big old feet hanging out there in the middle of the courtroom.
The seating is pre-determined, so I don’t have any choice but to sit there.  And to make matters worse, the witness stand is about 5 feet to my immediate right.  So when the defense lawyer got up to stand in front of the jury box to question the first witness, it was like they were talking right over my head.  I feel like I’m the elephant in the room.
You can tell what I mean, right?  Do I have to draw you a picture?
OK, I will: 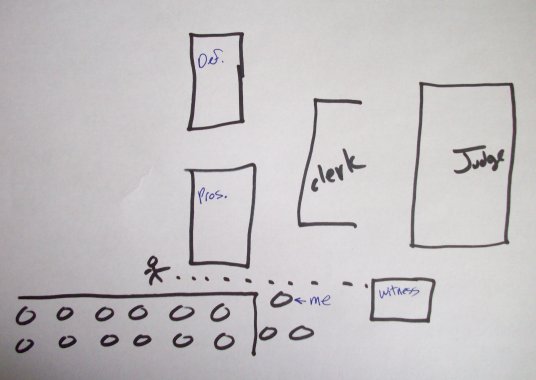 That’s the lawyer guy on the left.  A court artist, I am not.
The trial is expected to last until Wednesday or Thursday.  Basically, my job is to stay focused during the trial, take good notes and be sure that no one trips over my feet.  And I better make sure I wear my clean socks and don’t step in anything foul on my way to court.  If any jurors don’t show up or in some way get caught using a cell phone from inside the building, we Alternates will replace them, like the Pod People do.
Then once the prosecution and defense rest, if all the original jurors are still there, they’ll go into the jury room and deliberate.  And my Alternate friends and I will go home.
With a serious case of deliberatus interruptus.
Note: Obviously I can’t go into the nature of the trial until it’s over.  I will have another post at that time with my observations on the trial.  I mean, what’s the point of experiencing anything if you can’t blog about it?
Completely Unrelated Note: May I offer the warmest congratulations and best wishes to my Blog Friend/Real Friend/Honorary Sister, Cassie and her husband Matt, who on Thursday gave birth to Maelie Julianne, who really should have been named Jordan Sydney.  All are doing well and you can read about all the birthing stuff right here.
Uncle Bluz is just pleased as punch!
Posted by bluzdude at 2:54 PM