Forbes just ranked Pittsburgh as the #1 most livable city in the country.  Yes, really.  You can see for yourself here.
They ranked cities in a number of qualities: Low Unemployment, Low Crime, Income Growth, Low Cost of Living, and Arts & Leisure.
Obviously, they over looked Trying to Get Where You’re Going Without Getting Hopelessly Lost or Stuck in Construction Traffic for 4 Goddamn Hours.  That might have affected the curve a bit.
When you build a city around a triangle, there are no such things as roads that run parallel.
Mr. Ovechkin, Your Foursome is Up
The Washington Capitals getting bounced early from the Stanley Cup Playoffs again had given rise to another sly joke.  (Yinz may have already heard this… I first saw it on the Pensblog’s comments.)
Customer: Bartender, I’d like to order an “Ovechkin”.
Bartender: What’s that?
Customer:  It’s a White Russian, without a Cup.
Wooooooooooooooo!
Tased and Confused
I saw an article today about how a Philadelphia Phillies fan got onto the field and ran around the outfield until he was tasered by security. 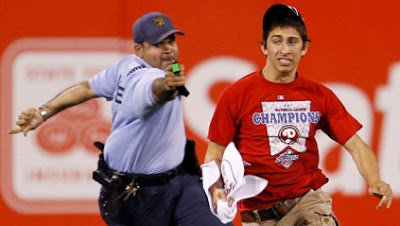 Some were complaining about unnecessary force being used.  I disagree.  Personally, I would recommend using a taser on everyone that entered the stadium to see the Phillies, Eagles or Flyers, just on principle.
But seriously, if you don’t want to get tased, keep your ass in your seat.  Bad things can happen when you forget that rule.  Taser kid probably got off light.
You remember what happened when that jackass in Cleveland ran onto the field during a game against the Steelers?  James Harrison came up behind the guy, picked him up and powerslammed his ass into the turf.
This makes sense to me.  You want to mix with the players?  Button up, buttercup, because there may be a guy out there that doesn’t tolerate such foolishness.
I remember as a kid seeing a player for the Baltimore Colts take care of some idiot that ran on the field.  It was a linebacker named Mike Curtis… as I remember it, the fan came running by and Curtis swung his arm out and clothes-lined the guy.
I have no sympathy for these clowns.  Stay off the field.  Period.  Next sentence.  Because the players don’t know what ‘s going to happen.   Remember when that father and son duo came out of the stands and assaulted the first base coach at a White Sox game?  Hell, some slob could run out there with a bomb, for all we know.
It’s like when these drunks climb into a polar bear pit or lion’s exhibit at a zoo.  Can’t blame the animals… they do what they do.  Don’t want to get mauled?  Stay out of the cage.  There!  Problem solved.
Wonderful World of Words
“Shat.”
What a great word.  I wish I could fit it into more conversations.  Regardless of what it refers to, I think it makes you sound sophisticated to say it.
I’m always reminded of how much I like the word when I hear the song “La Resistance” from the South Park Movie soundtrack.
It’s a rousing medley, primarily sung by a snobby kid with a faux British accent, about the nobility of your death when participating in Revolution:
“They’ll cut your dick in half
And serve it to a pig,
And though it hurts, you’ll laugh
And dance a dickless jig,
But that’s the way it goes,
The more you’re shat upon,
Though you die, La Resistance lives on.”
See?  Classy!
Train Train
Now to conclude, (because the Pens’ playoff game is coming on in a half hour), I wanted to post a clip I recently found.
Remember back when I was posting my music biz memoirs, waaaaaaaaay back in March?  One of the posts talked about meeting legendary Nashville fiddler, Mark O’Connor, and talking with him about his amazing version of the “Orange Blossom Special.”
If I had half a brain, I’d have looked for it on YouTube at the time, but I was too stupid never thought about it.  Now that I’ve stumbled on it, I’ve gotta run it.  And you have to click it!  Just watch it take off, right after the awesome harmonica solo.  This is shit-kicking at its best.  (Or is it “shat-kicking”?)  I'll restate what I told Mr. O'Connor in person... listening to this song is like a religious experience, because they the time it's done, all you can say is "Jesus Christ!"
Posted by bluzdude at 6:51 PM