I read an article on the Huffington Post this week, called “10 Ways Introverts Interact Differently in the World.”   I found it interesting because I’ve always considered myself an introvert, despite being told by numerous people across the years, that I’m not.  I think it’s my basic nature, but not at all times in all places.  Because I could find so many exceptions, I could never really be sure.  Perhaps I’m just a hot mess.

But in the article, there were a number of times where they had me down cold; enough so that I’m inclined to believe my original assessment.  Here are (in edited form) the 10 characteristics, and the degree to which I match up.

* They withdraw in crowds.
“The resulting crowd, which is often loud, noisy and congested, easily overstimulates introverts and drains them of their physical energy. They end up feeling more physically isolated than supported by their surroundings, and would rather be anywhere but that sea of people.” 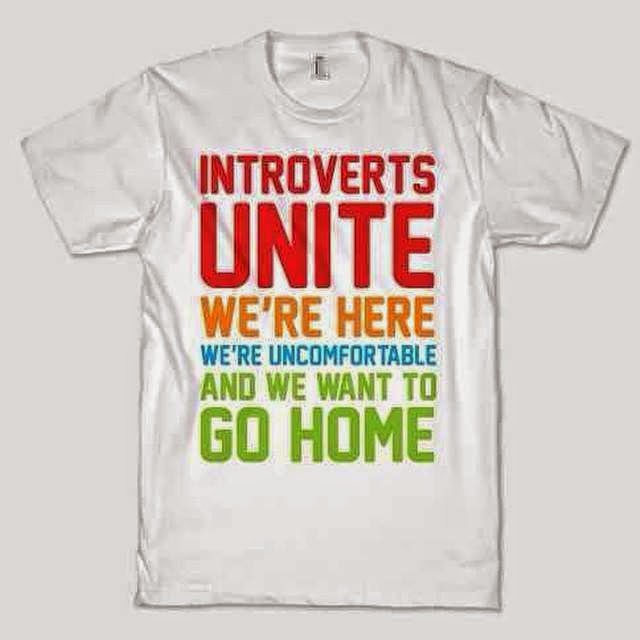 This one is not a major issue for me.  Being within a crowd doesn’t really bother me… as long as I’m not getting squashed or knocked around.  I mean, look how many ballgames I go to.  But then, I’m not required to do anything while I’m among the crowd.  I can hide, because I’m one among many.

* Small-talk stresses them out, while deeper conversations make them feel alive.
“While most extraverts are energized by such interactions, introverts often feel intimidated, bored or exhausted by them. It's not uncommon in large conversations for introverts to take on the role of the quiet listener and then take time alone once it's complete…  It ultimately comes down to how a person receives (or doesn't receive) energy from his or her surroundings. Instead, introverts prefer deeper conversations, oftentimes about philosophical ideas.”

Definitely me.  I hate small-talk and hallway chitchat.  I never know what to say.  Talking about the weather or other harmless platitudes makes me feel like a big, shallow phony.  That’s one reason I always come into our building at work, wearing earphones.  (Yes, WITH music playing.  I’m an introvert, not a sociopath.)  It gives me an excuse not to chitchat on the elevator.

Now, take the same person I’m avoiding in the hall and sit us down at a table for a while, and I’m fine with where ever the conversation takes us.  No, it doesn’t have to be “philosophical ideas,” (yech), but something real.

* They succeed on stage – just not in the chit-chat afterwards.
“At least half of people who speak for a living are introverted in nature.  They simply play to their strengths, and prepare extensively. In fact, some of the most successful performers are introverts. Remaining on a stage, removed from a massive audience, proves far easier than the small talk-filled conversations that follow.”

This is closely related to the preceding item.  In my world though, “the stage” is more like a conference room.  I have no problem preparing and presenting material and discussing it with a group.  The key point is that I’m prepared.

Now, in that same group, if someone cold calls me and says, “Bluz, will you talk about this issue we’ve been working on?”  I go into a cold panic and struggle to find words, especially if it’s not something related to my primary job.  I need a warning and time to get my thoughts in order, so I don’t sound like a bumbling idiot.  Luckily, my supervisors know this about me, so I usually have time to prepare.

* They get distracted easily, but rarely get bored.
“If you're looking to destroy an introverted person's attention span, just put them in a situation where they feel overstimulated. Due to increased sensitivity to their surroundings, introverts struggle with feeling distracted and sometimes overwhelmed in large crowds and open office spaces.”

For me, yes and no.  From a cubicle, I can block out all the noise around me and focus on what I’m doing.  In fact, anyone calling for me usually has to say my name a number of times before I hear them.  BUT, this is while I’m in a cube with walls, which provides the illusion of solitude.  It’s like putting a towel over a birdcage.

“Rarely gets bored?”  Yep, that’s me.  To my buddies, it’s been a running joke for 30 years about how I’m easily amused.

“Overwhelmed in… open office spaces.”  Yep.  Hate those.  And my company is about to remodel into a floor plan featuring just that.  I’m dreading it.  I hate feeling like I’m out on display.  I’ll take my corner with a towel over my cage.

* They are naturally drawn to more creative, detail-oriented and solitary careers.
“Introverts naturally prefer spending time alone or in a small group, delving deeply into one task at a time and taking their time when it comes to making decisions and solving problems. Therefore, they fare better in work environments that allow them to do all of these things. Certain professions -- including writers -- can give introverts the intellectual stimulation they crave without the distracting environment they dislike.”

This explains why I hated retail so much.  There was always so much going on at once.  I did much better when I had a single task, large or small, to accomplish.  I much preferred to be in the back office, checking in product, doing returns or placing orders.

* When surrounded by people, they locate themselves close to an exit.
“Introverts not only feel physically uncomfortable in crowded places, but also do their best to mediate that discomfort by hanging as close to the periphery as possible. Whether it be by an exit, at the back of a concert hall, or an aisle row on an airplane, they avoid being surrounded by people on all sides.” 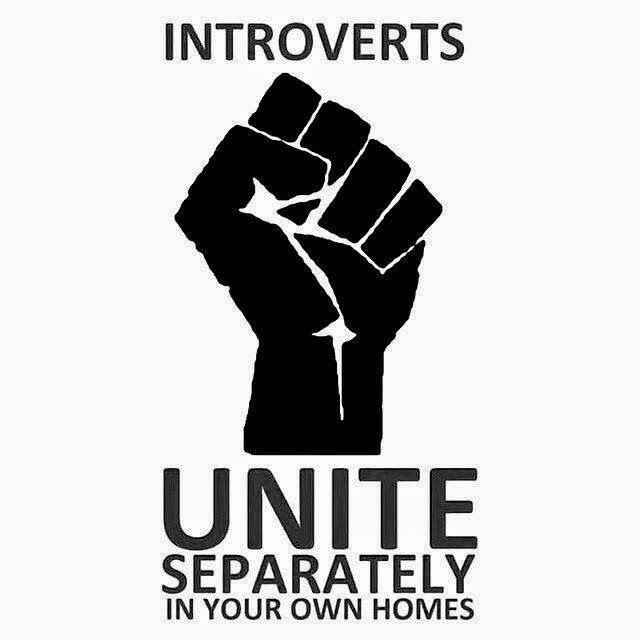 For me, it’s not necessarily being by an exit, but I much prefer to be on the outskirts of a crowded room, than in the middle.  The wrinkle is that if I’m sitting at a big table, I’d prefer to be in the middle, just so I can hear more of what’s going on.  If you’re on the end, you’re cut out of any conversation going on at the other end.

* They think before they speak.
“This habit of introverts is often what earns them their reputations as listeners. It is second nature to them to take their time before opening their mouths, reflecting internally, instead of thinking out loud (which is more common among extroverts). They may seem more quiet and shy because of this behavior, but it just means that when they do speak, the words they share have that much more thought -- and sometimes power -- behind them.”

Well, that’s my goal…  And when I don’t think before I speak, it tends not to go very well.  I can come down with a raging case of Foot-in-Mouth disease if I’m not careful.  I think this also contributes to my reacting very strongly to getting interrupted.

People that know me known that it’s one of my hot buttons.  If I can sit there and listen to everyone else, take the time to collect my thoughts, and then pull the trigger to deliver something that’s on my mind, I damn well better get the chance to finish.  (Especially if it’s a story, which in my head, has a particular rhythm.)

It’s awfully hard to express a complex thought anymore, because as soon as you take a breath, between sentences, someone else usually cuts in and breaks up the flow or hijacks the point.  Usually that’s my cue to stop talking and leave the room.  My view: if you’re not listening, then there’s no point in talking.

* They physically can't stand talking on the phone.
“Most introverts screen their phone calls -- even from their friends -- for several reasons. The intrusive ringing forces them to abandon focus on a current project or thought and reassign it to something unexpected. Plus, most phone conversations require a certain level of small talk that introverts avoid. Instead, introverts may let calls go to voicemail so they can return them when they have the proper energy and attention to dedicate to the conversation.”

Totally and completely me.  I’ve never liked talking on the phone and view it as a necessary evil.  (“Necessary” as in if I want to talk to my parents or out of town friends, (which I do) it’s phone/Skype/FaceTime or nothing.)  Before the advent of Caller ID, I dreaded it when the phone rang.  The prospect of blindly picking up the phone to talk to yet another salesperson, pitchman or pest, was stressful.

If I have to call someone or someplace I don’t know, I will spend 10 minutes staring at the phone, summoning up the courage to pick up the receiver and begin.  I hate it.

* They literally shut down when it's time to be alone.
“Every introvert has a limit when it comes to stimulation. Think of each of them as having a cup of energy available. For introverts, most social interactions take a little out of that cup instead of filling it the way it does for extroverts. Most of them like it. They're happy to give, and love to see you. When the cup is empty though, they need some time to refuel."

Agreed, although I wouldn’t say I “shut down.”  But after a vacation, whether I’m visiting my parents, my buddies, or the rest of my family; while I love being there and hanging out with everyone, when it’s done, I need to get back to my cave and grab some alone time, to just “be.”

Being an introvert doesn’t mean we hate people.  It’s just that we have certain ways in which we need to interact.  I mean, I could easily work from home, but I would miss my co-workers and having daily interaction with people.  I’d go bonkers if I had to stay home all day, day in and day out.  So there has to be balance… like being able to get out, mix it up, and then have a place to which I can retreat.

So where are my introverts out there?  Do any of these things ring true with you?

Director’s DVD Commentary: There was another point on the list, which I cut for length; plus it didn’t really apply to me.  Click the link on the top, for the complete article.
Posted by bluzdude at 6:31 PM

Email ThisBlogThis!Share to TwitterShare to FacebookShare to Pinterest
Labels: Bluz LIfe, Things That Piss Me Off