We Put the 'Fun' in Funeral

So, it was back to the Burgh for Grandpa’s funeral.  I drove out Tuesday morning, attended two “viewing” sessions, the funeral was Wednesday and I drove home Thursday.

But first, I had to prepare.  My dress shoes were a little beat up, so I figured I’d better do something about them.  Usually when my shoes get too scuffed, I buy new shoes.  But I didn’t have time for that, so for the first time in about 15 years, I shined my shoes. 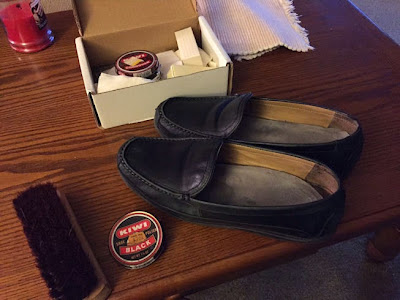 Unlike Joe Pesci in “Goodfellas,” I still have my shine box.

The trips were relatively uneventful.  I ran into some rain on the way out, but that was actually a good thing.  There was so much orange pollen on the hood of my car, I felt like I was driving a giant peach.

It was really good to see everyone.  That’s the funny thing about funerals, at least in my family.  I have so much fun hanging out with my aunts, uncles, and cousins; I almost forget why we’re there.

As my dad frequently said, we wanted to “celebrate the man’s life, rather than mourn his death.”  So what’s wrong with a little frivolity?  Sure there were some very sad and serious moments, like when my cousin’s 3-year old daughter tearfully exclaimed that “my Grandpa’s DEAD,” at the viewing.  But then later, she touchingly slid a piece of candy under his pillow. 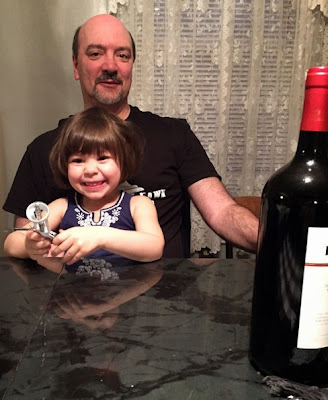 This is Luci, in a much happier moment.  Flash forward to someday in the future when she has kids: “I didn’t have fancy toys when I was little; I had to play with a corkscrew!”

But there were also plenty of moments of merriment.  Like when we were back at my aunt’s house, where Grandpa had spent the last several years.  There was a bunch of us gathered in the living room, including my sister-in-law and nephews, and other assorted relatives.

Nikki, completely oblivious to the situation, rolled the grid trying to find her show.  (Later on, she said she saw the “Gonzo” part and thought it was a Muppet show.)

Biting the insides of my cheeks, I began looking around to the room to see who was noticing.  It wasn’t everyone yet, just a couple cousins.

Just as everyone began to notice… FINALLY, she took a second to look at what was being highlighted on the screen, went “OH MY GAWD,” and mercifully changed the channel.  I swear I must have laughed for a solid five minutes.

Someone said, “What kind of cable package did they sign up for?”

I said, “Either our aunt has some exotic tastes we didn’t know about or Grandpa was a lot more spry than we thought!”

The other funny moment was at the late viewing Tuesday night.  I was sitting with Nikki, her sister Angela, and my sister, and we were trying to list some of our grandpa’s attributes that the priest might be able to work into his homily.  Soon their father, my Uncle Ange, strolled by and they asked him for some ideas.

He explained that Grandpa had a lot of opinions about what’s right, what’s wrong, and how things should be done.  He’d speak his piece, and let it go, never arguing with you about it.

My sister spoke up and said, “That’s not so!  He was always trying to get me to taste things I didn’t like, no matter how many times I told him I didn’t like it.”

Uncle Ange very gently said, “That’s because you were the Nuisance Grandchild.”

Well, that was a big mistake… not in what he said, but that he said it in front of me.  I then spent the rest of our time there bringing up her status as the Nuisance Grandchild, and soon the rest of the cousins were doing so as well.

Director’s DVD Commentary: He was totally kidding and felt bad about causing all the fuss.  I, however, have no such conflict.  In fact, in my role as Older Brother, I’d be derelict in my duties if I had done otherwise.

Angela and Nikki were also responsible for picking out a couple of Bible verses to read at the service.  I was really glad that they were asked, and not me.  No, it's not because of my anti-religious tendencies; it's that I would have been sorely tempted to use the verse that Samuel L. Jackson uses in "Pulp Fiction."  (Ezekiel 25:17)  But I'm not a bad enough muthaf***er to pull that one off. 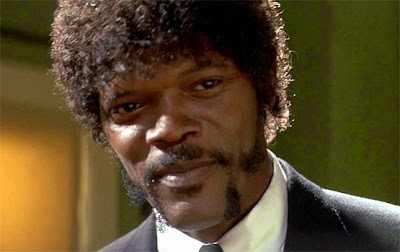 Available to speak at funerals, weddings and bar mitzvahs.

My grandpa was such a great planner, he even made sure he ended up with six grandsons; the perfect amount for pallbearers.  It’s been a while since I had the honor, so I must have forgot how much heavy lifting was involved.

My big mistake was at the funeral home, where we had to move the casket down the stairs and into the hearse.  I ended up on the back corner to my left.  My left hand is practically useless, plus, I was in a major load-bearing position.  I came very close to dropping my end until I could get my other hand into play.

Live and learn though, because we had a lot more moving to do: from hearse to church, church back to hearse, and hearse to the cemetery.  Each time, I made sure I could use my right hand, and got myself in the middle spot.  I’m the oldest of the group… let the young bucks handle the load!  Some of those guys could bench press that much weight… with me sitting on top.  I was content to be there merely for decorative purposes. 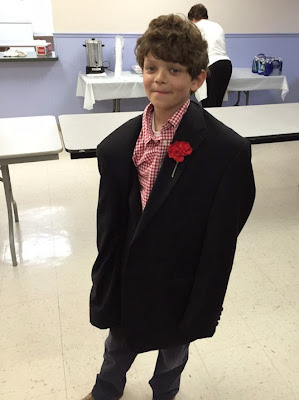 After the service, my nephew Sammy, pretending he's in the end of the movie “Big.”

In and around all the formalities, we would gather back at my aunt’s house, where there were plenty of catered dishes to work on.  Several people made liquor store runs, and Uncle Ange kept us stocked with plenty of wine.  We tended to do what we always do: sit around a table and eat, drink and tell stories.

I know my nephew Daniel likes it when I tell stories about his dad.  (His dad?  Not so much.)

We also made sure we paid attention to Grandpa’s late-in-life-partner, Samantha. 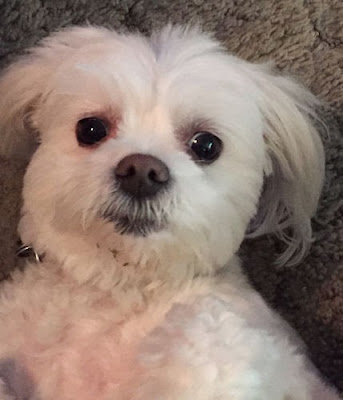 How can you not love this little face?

They were great companions ever since they got the little Maltese.  It was funny though because the only dogs Grandpa ever had were hunting dogs, who were always kept outside.  No one ever thought he’d become attached to a fluffy little lap dog.  I'm sure it helped that she turned out to be very smart, and a very good girl.

On Thursday, before scattering to the winds again, we stopped by our favorite hometown place to get fish sandwiches.  Because of course we did. 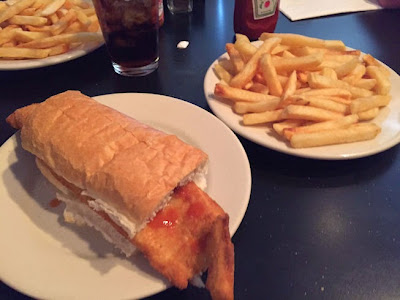 I even ordered two more, to go.  And remarkably, they both made the trip home… although one of them didn’t survive much longer.

Just in case you always wanted to know what Lady and the Tramp looks like in Italian, check out the poster that was hanging in the place: 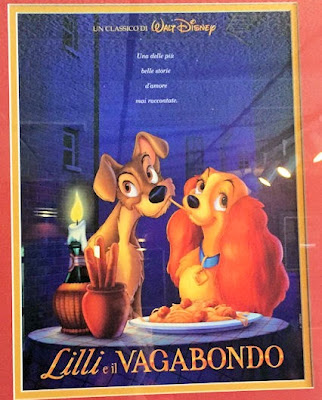 “Vagabondo.”  It sounds like it should be somebody’s name… “Now batting for Philadelphia, third baseman, Joe Vagabondo.”

So, we came to town, we laughed, we cried, we ate, drank and made merry.  And we made plans to restart our reunions, and get together more often.

Just what Grandpa would have wanted us to do.
Posted by bluzdude at 7:23 PM

Email ThisBlogThis!Share to TwitterShare to FacebookShare to Pinterest
Labels: Bluz LIfe, The Burgh, The Family Business