Saturday night, I got to watch a tremendous wrong get righted, as HBO finally broadcast the Rock n Roll Hall of Fame induction ceremony, which took place over a month ago.  My “Queen,” Joan Jett finally received her due as a hard rocking inspiration to a legion of fans, from aspiring female musicians to fans of her unrelenting 3-chord rock and roll.

If you have HBO, they will be re-running the show, so you should try to DVR it.  It’s definitely worth seeing, plus you can always fast-forward over any inductee who’s not your thing.  In addition to Joan, they inducted Ringo Starr, Stevie Ray Vaughan, Green Day, Lou Reed, Bill Withers and 50s group the Five Royales.

I watched the show via DVR, with a 30-minute lag.  I figured I’d leave room to zap the stuff I didn’t care for.  Little did I know I’d enjoy almost the whole 3-hour show.

I can’t even try to be objective when it comes to Joan Jett, who led off the show with a rousing run through her theme song, “Bad Reputation.”  As you may recall, I met and hung out with Ms. Jett about a half-dozen times during my career in record retail, (the full story is right here), and she was just a beautiful, genuine, sweetheart to me and to all the fans she’s met.  She listens when you speak, looks you in the eye when she’s doing it and gives you thoughtful, honest answers to your questions.

Even at 56-years old, she looked fantastic.  In that respect, she’s like the anti-Keith Richards.

One of the things that I think finally got Joan into the Hall was last year, when Dave Grohl brought her out when Nirvana went in, to sing their biggest song, “Smells Like Teen Spirit.”  It showed that she was being taken seriously by a highly acclaimed HOF band.  After Bad Reputation, she brought Grohl out to help with her other signature song, “Cherry Bomb,” from back in her days with the Runaways.  Later she brought on Tommy James for “Crimson and Clover,” which he wrote.  Miley Cyrus came out as well, for backing vocals.

I was surprised and glad that she didn’t play “I Love Rock n Roll,” which was easily her biggest hit, but was never one of my favorites.

I was kind of surprised when I heard that Miley Cyrus was going to be the one to do Joan’s induction speech.  I mean, other than their gender, I didn’t see much in common between the two of them.  She gave an interesting, if crass, speech, which opened with, “I wanna start off this induction with the first time I wanted to fuck Joan Jett.” 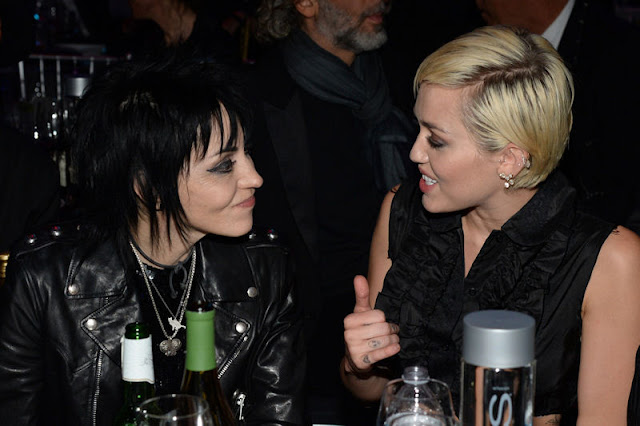 “Honey, I’ve got piercings older than you.”  Source: WireImage

Joan’s acceptance speech was far classier, and when she choked up, I was all done.  I was just so proud of and happy for her, it was almost like the Steelers winning another Super Bowl.

Bill Withers was kind of an odd choice, I thought, for the Rock n Roll Hall of Fame.  I mean, I’m sure he did more than the three songs for which I know him… (“Ain’t No Sunshine,” “Lean on Me,” and “Just the Two of Us.”)  But those were pretty high-quality songs.  I always thought of him as an African-American James Taylor, because his voice had such a smooth, soothing quality.

Stevie Wonder did the induction speech, and he and John Legend did the performances.  Withers didn’t sing because he’s been out of the music business for the last 30 years, but he did deliver a very clever and insightful acceptance speech.  One of his best lines was, “Having Stevie Wonder induct me is like a lion opening the door for a kitty-cat.”

I was never much of a Green Day fan, but their segment was enjoyable enough.  With all the weird groups that have been inducted thus far, you can’t say they’re not “rock and roll.”  Each member made a short speech, and they were far more eloquent than I would have expected.  They played three of their hits without any special guests participating, and that seemed to be enough.

I was never a Lou Reed fan either.  I watched Patti Smith give the induction speech, and Reed’s partner, (avant-garde synth artist) Laurie Anderson give the acceptance.  Both were touching.   But I fast forwarded through the performances.

That brought me to the other highlight of the night: watching Stevie Ray Vaughan and Double Trouble get inducted.  John Mayer took time off from banging starlets to give an inspired induction speech, followed by short acceptance speeches from the three remaining members of Double Trouble and Stevie’s brother Jimmy Vaughan.

Those were tough to watch; but enjoyable.  Then when they all started playing “Pride and Joy,” along with Gary Clarke Jr, I was done; reduced to a puddle on the floor.  To quote my favorite mommy family bloggers, I was feeling all the feels.  It was pride and happiness about their going in, mixed with the crushing sadness over the loss of Stevie Ray, and wondering how many more musical gems might have been brought forth over the last 25 years.

The only other song they played was “Texas Flood,” which I suppose was prescient, given the weather conditions in central Texas lately.  I kinda wish they played two shorter, snappier songs, but I understand that a longer song like “Texas Flood” gave each guitarist a chance to stretch out some solos.  And that was what SRV was all about.

I don’t care what anyone says, Ringo has always been my favorite Beatle.  Back in the 70s, I thought Paul was too sappy, John was too weird, and George was irrelevant.  But Ringo?  His songs here happy and peppy, with fat hooks and big choruses.  Granted, he did have a Who’s Who of British pop music in the studio with him, and writing songs for him.

I remember back when I was in 8th grade and took a class trip to Paris and London, we got to tour the Abbey Road recording studio.  They handed each of us an 8x10 glossy of one of the Beatles.  They gave me a John Lennon pic, which I immediately traded to another kid for a Ringo.  I always say that my first record album was Stevie Wonder’s “Talking Book,” but my second was a Ringo Starr album.  It was like the soundtrack to my 7th-grade year.  So contrary to popular wisdom, I have no problems with his being inducted into the Rock n Roll Hall of Fame.

Paul McCartney gave a lovely induction speech, and Ringo’s acceptance was charming, funny and very British.  For the performance, he got behind the drums for “It Don’t Come Easy,” and then led pretty much everyone from the rest of the induction class to do the obligatory “A Little Help from my Friends.”  (He totally should have sang it like Joe Cocker, as a tribute to the late Englishman.)

There may have been more, but I’m not sure… I was pretty wiped out by that time.

With Joan and Stevie Ray finally making it to the Hall, who am I going to complain about getting subbed now?  Most of my top favorite bands are in.

I guess I could go with Meat Loaf, but I’ve never even seen his name in the conversation.  There are the Scorpions and Judas Priest, but heavy metal is barely represented.  Maybe Dire Straits?  The Cars?