Several news stories caught my eye last week, and by running through them all now, I can be the last one to the party because they’re all old news by now.  Such is the lot in life for a weekly blogger.

“Lighten Up, Francis”
I just had to laugh when Rick Santorum, the political face of Catholicism, spoke up to ask that the Pope stop talking about climate change, preferring that he leave the science talk to the scientists.

Ordinarily, I’d agree with him because Catholic leadership has not traditionally cottoned to scientific learning over the ages.  Just ask Galileo.  But this Pope breaks the mold a bit.  In fact, he has a secondary degree in Chemistry, which makes him about 700 times more qualified to speak on scientific matters than Santorum. 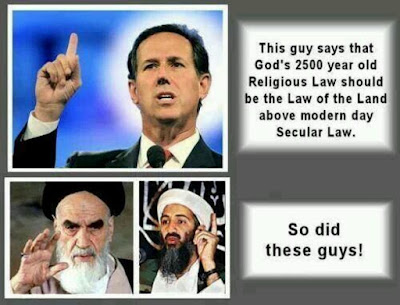 This really puts Santorum in a fix.  He can either ignore the leader of his faith, (a faith which seems to be the central pillar of his campaigns) or ignore the direct commands of his wealthy GOP benefactors… coughKochBrotherscough… who need him to denounce mankind’s involvement in climate change, because doing otherwise, or heaven forbid, taking action to address it, would be bad for their energy businesses.

I am once again left in awe of the massive hypocrisy at play here.  Yes, Rick, let’s please stick to things we know about.  Because politicians certainly know about everything, don’t they?  Politicians know that 97% or environmental scientists are wrong.  Politicians know best how a woman’s reproductive system works.  Politicians know exactly how long a woman should wait before being allowed to have an abortion, or how far they have to travel before it becomes an inconvenience.

What GOP politicians know how to do is meddle in average people’s personal affairs, while claiming to be for less government.

And that was never as clearly demonstrated as it was in another article I saw, comparing requirements for doctors performing abortions in blue states versus red states.  Many Republican state governments are providing mandatory scripts for these doctors to read to their patients, which contain blatant falsehoods and lies.  (Example: “Medical abortion can be reversed,” “abortion causes breast cancer,” abortion leads to irreversible mental illness and depression.”)

I don’t care what one’s stance is on abortion; politicians are overstepping their bounds by telling trained medical professionals what to tell their patients.  If a person can’t trust the information a doctor is providing them to be accurate, the medical profession falls apart. 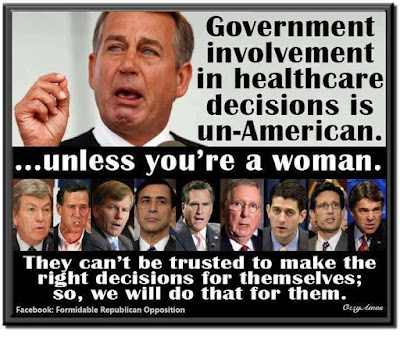 Again, GOP politicians campaign on reining in government, but they substitute their factually incorrect dogma for a highly trained, highly skilled doctor’s advice.  Of course, they say it’s all to protect women.

But we know what it’s really about… it’s just one more piece of the puzzle, designed to prevent women from seeking abortions.  It’s right up there with requiring doctors to have admitting privileges at hospitals, and clinics having the same ER capabilities as hospitals.  If enough clinics close, women will have to drive that much further.  And if they can’t get insurance for the procedure, they might be able to afford it.  And when they do get to the clinic, there are government-enforced waiting periods, which requires either a hotel stay or a second long-distance trip.  PLUS, there are non-medically necessary tests some doctors are required to do, like sonograms and ultrasounds, transvaginal or otherwise. 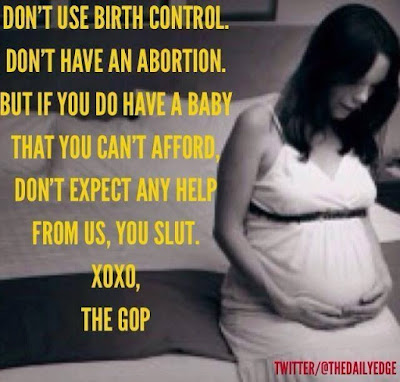 And if they’re really just concerned about a woman’s safety, why aren’t there similar regulations for non-hospital places where you can have a baby?  There is a far higher risk of dangerous of fatal complications from childbirth than there are from abortions.

Just when the fuck did all these congressmen get medical degrees?  I wouldn’t want these fucksticks anywhere near my family, or my wife’s uterus.  (You know, if I had a wife.)

Yeah, requiring banks to disclose their terms in plain language is a massive government interference into the free market, but these pricks can make a doctor give incorrect information to a woman in need.  That’s the party of “less government.”

The Right Way to Solve the Problem
At least there was some good news from the Abortion Wars.  The number of abortions performed in the US has come down since 2010.  Conservatives were quick to claim that the drop was due to their increased regulation of abortion providers, like forcing them to provide sonograms.

However, that claim falls apart when you see that the number of abortions dropped by a similar amount in states without restrictive legislation.

But do you know what is applicable across the country since 2010?  Access to free birth control, made possible by Obamacare.  You know, the program that conservatives are fighting so hard to repeal.

Makes perfect sense.  It’s no wonder people get fed up with politics.

Live Without a Net
With a couple of recent injuries at baseball games in the news, I saw an article about how some people now are pushing to have ballparks extend netting around the infield, to protect fans from flying bats and balls.

And the pussification of America continues.

Look, it’s simple… pay attention to the game.  If a bat’s coming, duck, or at least get your arms up to protect yourself.  OR, if you’re worried about it, don’t sit right up front!  All these things are choices, and I’m a pro-choice dude.

One of the people in the articles actually said that no one complains about the netting behind home plate, so it wouldn’t be any different if they extended it.

I say, Lady, you must not read Darwinfish2.  I complain about the netting every time I sit in Sitcom Kelly’s Mom’s company seats, behind home plate.  I don’t like that it ruins any chance to take a decent picture.

However, I’m not actually complaining so much that I don’t want the net to be there because that’s a high-risk area.  Foul balls are blasted against the screen with great regularity.  Down along the baselines, not nearly as much.

I’m good with extending the railings, so that people don’t fall out of the upper deck. And I’m good with the net behind the plate.  But leave the rest of the field alone, please?  We can’t just bubble-wrap our entire lives.  If you don’t accept the risk, go sit under the deck.

Oh yeah, it’s harder to be seen back there.

Director’s DVD Commentary: I fully acknowledge that if it had been ME who got clonked on the head by a flying baseball bat, I may be leading the charge for netting instead. Or not.  It would be my own fault.

Our Moment of Zen
Lastly, did you hear about the ISIS terrorist who posted a selfie of him standing outside his ISIS headquarters?  US Intelligence was on it immediately, and 22 hours later the Air Force dropped three bombs on it and destroyed the building.

I only have one thing to say about that: 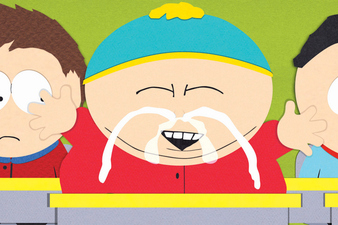 And here we thought that the worst that can happen to you when you keep your nose in your phone, is getting clobbered by a bat.
Posted by bluzdude at 8:02 PM