Rolling through Facebook this morning, I saw another meme in dire need of a good debunking. So here we are.

That this nation is tied in a knot over what to do about guns goes without saying.  It’s hard enough getting people to listen to each other without muddying the water with asinine graphics chocked full of logical fallacies. 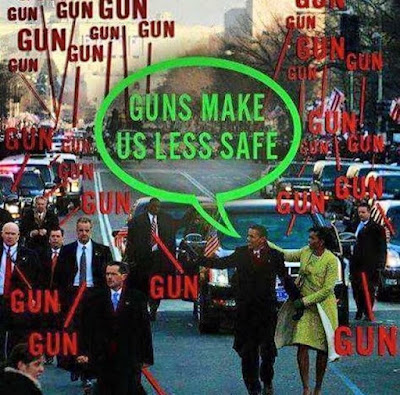 “Har har.  Look how hypocritical that commie president is. He’s saying one thing and doing another.  When it’s HIS ass on the line, he wants to be surrounded by guns.”  That’s what you’re supposed to think.

First off, I don’t know that he ever actually said those words, so the premise is iffy right there.  And the meme, by using a word balloon, is purporting it to be a quote.  BUT, that would be an accurate, if emotionally loaded, generalization of the many studies that show a person is way more likely to be killed by a gun if there is a gun in the house.  So we'll go from there.

The high-level conclusion would be that the average person is less safe with a gun in the house. (I’m not going to get into statistical analysis here.  But there’s a reason the Republicans have rammed through prohibitions against federal agencies conducting any more gun violence studies.  They don’t like the conclusions.)

Granted, there is no such thing as an average person… only millions of individual sets of circumstances.  A gun might make one trained marksman or service member considerably safer, but much less so for your basic putz who’s never pointed anything at anybody but his dick.

The real flaw in this meme is the faulty analogy needed to come to the desired conclusion.  To get there, you have to believe that the American President, walking down a public street during what looks like his inauguration, is identical in circumstance to a regular guy*, going about his life.

At any given moment, the president has thousands, maybe tens of thousands of people who would like to see him dead.  Especially THIS president.  Our country has a stake in protecting the president, lest allies revolt and the markets crash.  Every precaution is taken to protect the life of our president.

Regular guy?  Maybe a handful of people want to kill him, under worst case scenario.  But for the most part, not so much.  And other than for his family, he’s expendable.  We all are.

The president is being protected by Secret Service agents who are highly trained in the use of firearms, as well as threat detection and keeping calm under pressure.  Their very job, by definition, is to protect the president.  And that’s every president, not just this one.

The regular guy?  Hit and miss, and by that, I mean mostly miss. I’m sure there are people who are highly proficient in the use of their weapon and put in time at the firing range.  But that’s a matter of individual responsibility, and hardly of the caliber of Secret Service training.  I mean, any schmo can walk into a gun shop and buy a weapon, if he can pass a background check. (Unless he’s at a gun show, in which case, he just needs cash and a pulse.)

There are no proficiency standards required to own a gun.  That’s pretty scary, considering all the hoops we have to jump through just to get a driver’s license.  And the primary function of a car is not to kill people.

And even if the regular guy is good at the firing range, that’s a long way from using a gun in an adrenaline-fueled life-or-death situation.  Not many people out on the street have that kind of training… maybe ex-military or ex-police, but not civilians... not in relation to the number of privately-owned guns.

So comparing a regular guy to the president’s protection detail is the essence of willful ignorance.  The two sides aren’t remotely similar, but why not put’em together anyway, because har har har.

But to take this one step further and play devil’s advocate, who says it’s the guns that are really ensuring the president’s safety?  Have you ever heard of a physical assault on the president being thwarted by an agent’s gun?  I haven’t.

I’ve lived through three such presidential attacks and none of the assailants were shot.  OK, Lee Harvey Oswald was shot, but that was by a vigilante club owner, while in police custody. But the other two, John Hinkley and Squeaky Fromme were both swarmed over and apprehended by the agents.

What I see ensuring the president stays safe is a lot of agents in close proximity, constantly scanning the crowd for signs of a threat, and knowing what to do if they find one.

And not just when the president is around. There’s an enormous amount of legwork that goes on in preparation for a presidential visit, so that all sightlines, near and far, are removed or accounted for.

In neither of those precautions was the agent’s gun the primary defense or did it even come into play.

Anyway, think what you will about the gun issue, but when you do, please try to make valid comparisons.  Or better yet, just make a case with verifiable facts.