My last post told you about how I won the chance to throw out the first pitch at the Orioles-Blue Jays game, the next night.

Let me tell you, that Tuesday was a real bear to get through... not because of the anticipation as much as the weather forecast.  I had the hour by hour weather report up on my computer screen all day long.  Every time I refreshed it, the forecast changed.  Sometimes it looked like there would be a brief hole in which the game might be played, other times, it looked like rain all evening long.

Late in the afternoon, we got a message that our company event was going to be moved from the bullpen picnic area to the ballroom inside the Warehouse. (aka that big building in right field.) 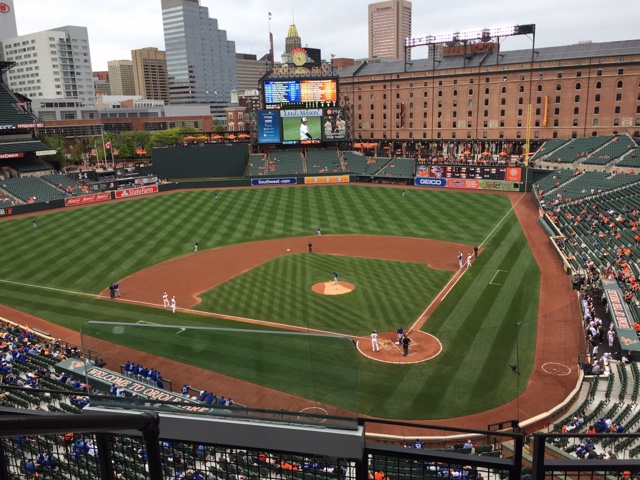 Everyone sees the outside of the Warehouse; not so many have seen the inside, so that was pretty cool.

I got a ride over to the ballpark with my boss, which was nice because it was still raining.  What wasn't so nice was that I forgot to bring my ticket with me.  It was still in my desk drawer, clipped to a Sharpie, so I wouldn't forget either of them.

I'm lucky I have a cool boss, because I inadvertently used some language that one probably shouldn't use around one's boss.  And I was doubly lucky because she ended up with an extra ticket, due to a last minute cancellation, so we didn't have to go back for mine.  Plus, she had a Sharpie... it was sea green, but it would have to do if I had the chance to score any autographs.

So we carried on at the Warehouse, hoping the forecast would change for the better, but as the minutes went by, it just seemed to grow bleaker. 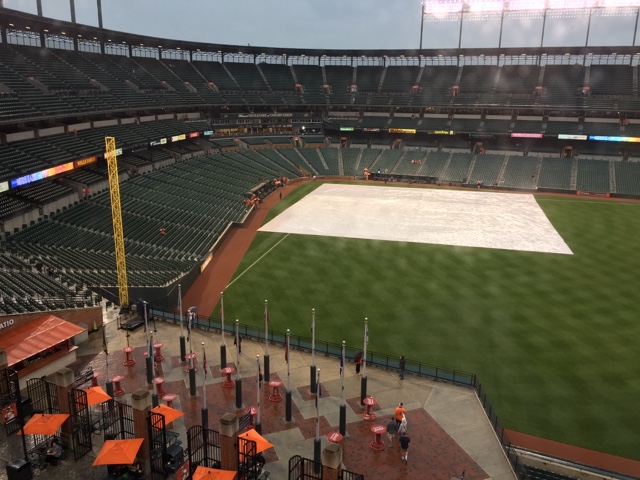 The saddest sight in baseball is a tarp on the field.  Shot from the 6th floor of the Warehouse.

Just after 6:00, Caitlin, my contact with the Orioles, let me know that they were postponing the game.  By that point, I figured it was inevitable.  I just hoped they didn't reschedule the doubleheader for Thursday, by which time I would be in Florida.  But they came through... the first game would be Wednesday at 4:00.  My First Pitch would still be in play.

Thursday was a little more nerve-wracking, because I knew for sure that this would be the day.  Robin wouldn't be able to be my "second" on the field this time, so I twisted Sitcom Kelly's arm into coming along.  It didn't take much... go down on the field, be close to the players?  Yeah, she was in.  This would open up a whole new set of stalking targets for her.

At least I wouldn't have to worry about making a fool of myself in front of everyone from the office... Everyone who had a ticket for the rainout game had the opportunity to use it for any other game this year, or for the first Blue Jays series next year.  I didn't expect many to come back out to the Yard the very next day.  So if my pitch went badly, I could always deep-six the video and claim it got accidentally deleted.

We met Caitlin at 3:15, as directed, and she took us down to the "Alternate Clubhouse," where people usually wait for their big moments.  This was also the same room where the Orioles' manager, Buck Showalter, does his pre and post game press conferences. 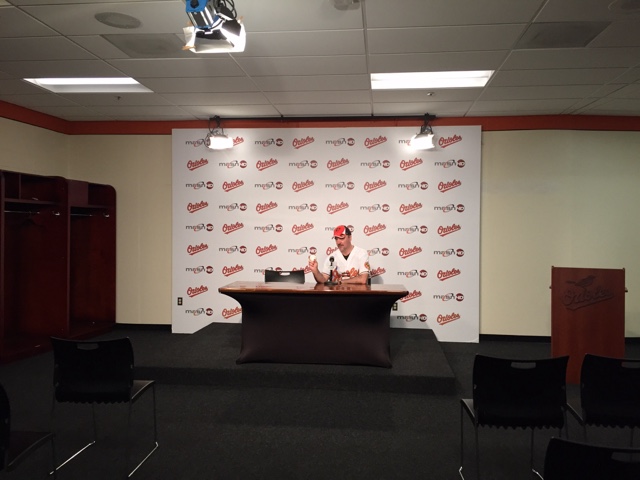 I asked if there would be a problem if I went up to the desk for a couple of pictures.  They obliged, and the camera technician even flipped on the lights for the set.  So that's how I got my "Press Conference" picture. 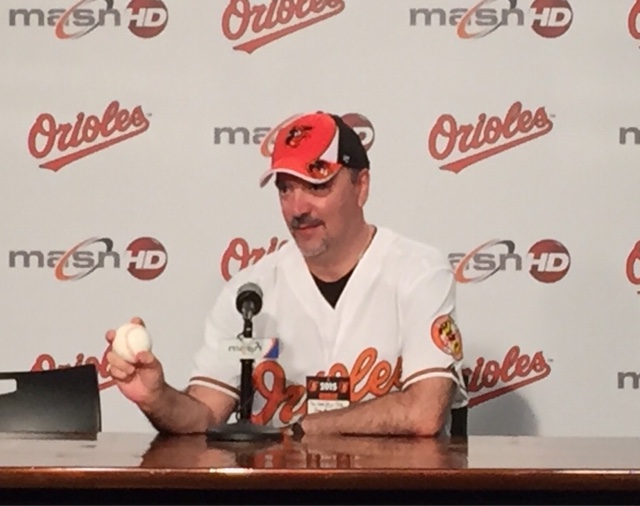 Bluz Dude explains the intricacies of his sinkerball.

It was funny that our handlers didn't really have anything to say to us.  Remember, I was expecting a liability waiver and a scroll-like list of forbidden actions.  Well, there was a list of waivers on the back of our "backstage pass," so that passed for the liability stuff.

When I mentioned the "Scroll of Forbidden Behavior" to Caitlin, she just laughed.  But then she said, "We're just supposed to tell people not to get on the mound, and not to throw hard, because your catcher won't have any gear on."

She gave my the baseball I'd be using for my pitch, and a pen with which I might be able to get it signed.  (This rendered moot all my worrying about the Sharpie the previous day.)  She said Sharpies don't work very well on baseballs, because they smear.

Because this was a doubleheader, there were to be two separate First Pitches: mine, and one from the guy who was already scheduled for that day.  Because of the limited time between games, they were going to do both pitches before the first game.  The other guy was to go on at 3:48.  I was up at 3:51.

They took us out to the field around 3:35.  Just like when I was on the tour this summer, it was a thrill just to walk out onto the field from behind the plate.  I gave Sitcom Kelly a rundown on how to shoot video on my iPhone, as well as capture photos while doing it.  I just had to hope she would keep me in frame and avoid zooming in on the players' butts.

Just standing around back there would have been really nerve-wracking if it would have been a full house, but the house was most definitely not full.  I'd be throwing out my pitch before literally dozens of spectators. 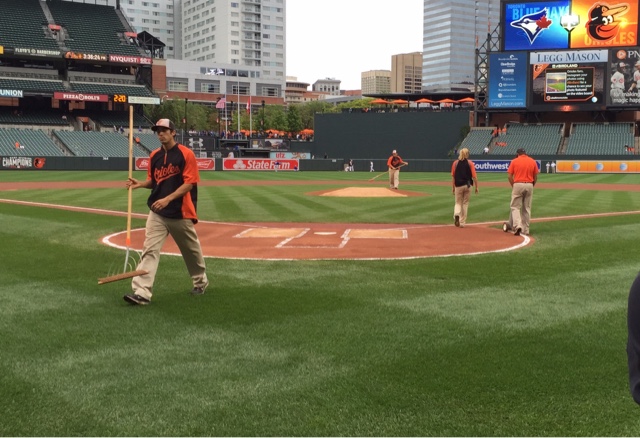 I've seen more people in line for the bathrooms.

Sitcom Kelly used the time to carve her phone number into the sand in front of the dugout.  Stupid grounds crew had to come and smooth it over.

Eventually a "Ball Girl" came over to give me the logistics.  Long and short of it... follow her and don't step on the white line. 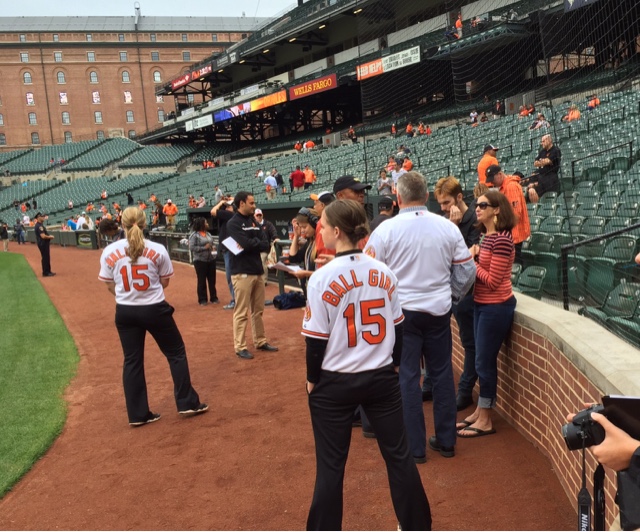 They introduced the first guy to pitch, with his title of "Exulted Grand Wizard" of something or another... some benevolent organization.  I was like, "Hey I want a title like that!  I want to be an Exulted Grand Wizard too.  Maybe they can just say I'm Admiral of the Fleet."  But they'd already gotten my particulars and I felt it was too late to renegotiate.

At this point, I still didn't know who was going to come out and catch me.  The first guy had a relief pitcher, Jason Garcia.  He was new to the Orioles, a Rule Five Draft guy.  (That means they signed him from another team and he has to stay in the majors all year, or be offered back to his original team.)

So when the Bat Girl brought me over to stand in front of the bench, I looked inside and saw Manny Machado walking around the bubblegum jar.  I was like, "Holy shit!  I might get Manny!"  I was even wearing a Machado jersey for the occasion.  I would definitely have him sign my jersey.

But then Garcia came bounding up onto the field and I realized Manny was only milling around down there for the bubblegum.

Then, the PA announcer started his thing and it was time for my moment.

Couple of thoughts:
*  You like that little spin-around with the hat?  I was hoping I didn't fall on my face.

*  Obviously, I touched the grass, right there at the beginning.  But it was very wet, so I had to wipe off on my pants. 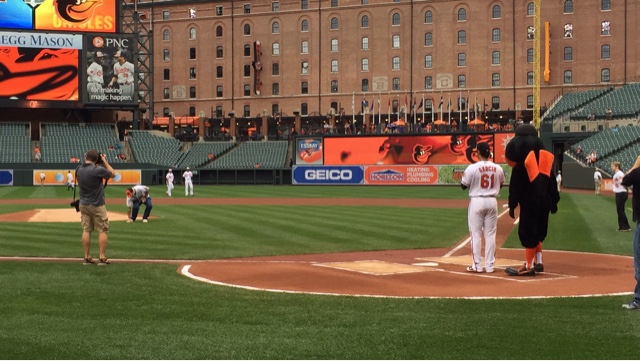 *  I still did a modified version of my Luis Tiant (backward pivot) windup, but I added a Bugs Bunny element by rotating my wrist a couple of times before I spun forward and delivered.  Unfortunately, given the angle from which Sitcom Kelly was shooting, my body blocked the view of my hand. You'll just have to take my word for it.

*  After the pitch, I heard a big roar ("Big" considering how few people there were in the park), and saw handful of O's fans behind 3rd base.  You can see me turn to acknowledge them.  I assumed they came from my office... I'll have to ask around when I get back. 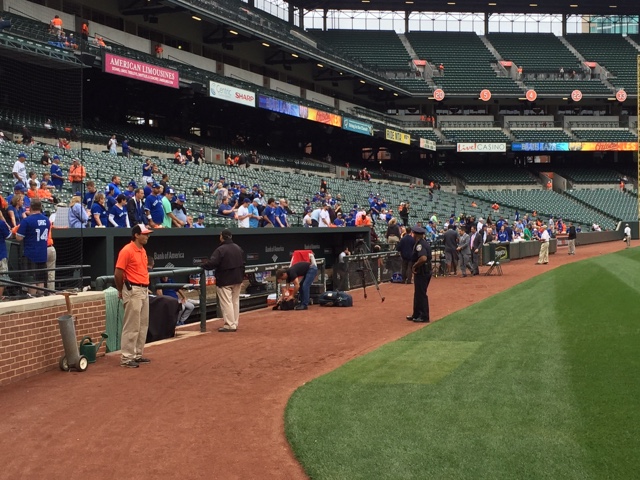 *  Jason Garcia was a very nice guy.  As he was signing my ball, I asked if he drew the short straw today.  He said this was "(his) thing, because it was a good luck charm.  Whenever (he) caught the first pitch, the Orioles won."  I thanked him and wished him luck as we crossed back over the foul line. (Not touching it, of course.) 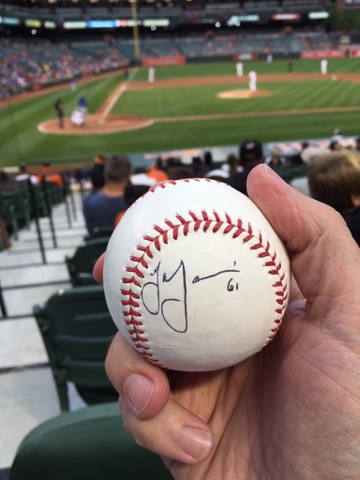 *  I'm sorry to have broken his lucky streak, because the Orioles lost 15-2, and he came into the game and gave up 4 runs himself.

So that was it.  They led us back up to the main concourse, then Sitcom Kelly and I went up to our seats.  I had to miss the first couple of innings while I was posting the video to Facebook and notifying friends and family.  Of course I had to edit the video first, because as soon as my part was done, Sitcom Kelly started shooting all the guys warming up in the outfield.  Those guys don't know how close they were to clawing at the dirt walls of her basement pit.

I was so eager to see how the video came out.  Right up until I watched it, of course.  I mean, I got it there, but it was Soooo.  Slooooooow.  I wish they hadn't told me not to throw it hard.  My middle-aged version of "hard" might have been just right.

It was funny watching the responses roll in.  By and large, my female friends congratulated me and said nice things.  My guy friends gave me shit over the velocity.  My brother said I hit "15-mph on the jugs gun."  The CFO said it looked like the ball was filled with helium.
What can I say?  Maybe the Orioles were in the market for an aging pitcher with a weird windup and variety of off-speed stuff.

Still, even with the stops and starts, this was the coolest thing I'll ever do.  I mean, what boy doesn't what to throw a pitch on a major league field?

Once I get back from Florida, I'm supposed to go back to work on Thursday.  I don't know... I don't know if all this has gone to my head, but I think I may hold out for a new contract.

Somebody get my agent on the phone.

Director's DVD Commentary: In all seriousness, I'd like to thank Caitlin and the whole Baltimore Orioles organization.  They put on a great event and were the model of professionalism and courtesy.  And even better, they'll provide me with the video and pictures that THEY shot with their non-iPhone cameras.
Posted by bluzdude at 5:08 PM

Love the swirl...and stepping large over the foul line...I was expecting a batter?

You got it to the plate! Awesome!

Neither of us is much for baseball, but this was pretty damn cool. I love the press conference picture. Yes, please, tell us all how you managed to throw a ball and get it to the plate. I'm lucky if I can throw a ball 20 feet.